March 9, 2019, 11:37 PM · ALBUQUERQUE, N.M. -- One of the most enjoyable parts of going to the American String Teachers Association Conference, which started Wednesday and wraps up today, is its giant Exhibition Hall, filled with businesses that serve teachers and musicians. One can find acoustic and electric instruments, bows, strings, shoulder rests, sheet music, fiddle cases, music-related wall art and jewelry, and more. There are also representatives that can talk about instrument insurance, music colleges and conservatories, travel tours for student orchestras -- there was even a company that could help you raise funds for such a tour by selling its popcorn! (They were giving out bags of it for free, too, yum!)

I also attended educational sessions at ASTA, with Rachel Barton Pine, Mimi Zweig, Christian Howes, Jason Anick and Bob Gillespie - please check back later this week and the next few weeks for in-depth stories on those.

With some 85 Exhibitors this year at ASTA, I did not get to every booth, and even with the booths I did visit, I didn't get the scoop on everything! But here are a few of the highlights from my visit to the 2019 ASTA Conference Exhibit Hall, and I hope it gives you an idea of what is there, in case you think about going to this event in the future. What makes it really wonderful is that it's ALL about stringed instruments; where as something like the NAMM Show, stringed instruments were just a tiny subset of the offerings.

One of my first stops was at the Shar Music booth, where there was quite a lot of commotion! I looked closer and found violinist Tracy Silverman, who was once a violinist in the Turtle Island String Quartet, showing the young musicians of the Gilbert Town Fiddlers of Gilbert, Ariz., how to do "strum bowing." In the video that I took below, Silverman also describes his new method book by the same name, The Strum Bowing Method, available from Shar.

Moving on to other booths, I found someone that I've always wanted to meet: Andrew Baker, creator of the ultra-high-end Leatherwood Bespoke Rosin, based in Australia. I've been using his "crisp" rosin and over several months have slowly removed the other 3-4 rosins that I had in my case as I've come to prefer it. He told me that he and his wife Emma Baker personally cook all of their rosins, and he also talked to me about why he decided to create his own recipe and start making rosin himself:

At the Yamaha booth I found plenty of Yamaha Electric Violins and Silent Violins, as well as a lot of young musicians testing them out!

My own 5-string YEV had been in silent mode until a few weeks ago, when for my birthday I received an amp: the Yamaha THR10C. Just as I spotted the amp and was preparing to say, "Hey, that's the same as my amp!" Yamaha's Ken Dattmore asked, "Have you gotten unplugged yet?" Wait, I thought the whole point was to finally get plugged in!?

Actually, he said, I can go cordless, and it's very easy. Line 6 just released a new kind of wireless transmitter that works perfectly with the YEV, called the Line 6 Relay G10, which has a 50-foot range. While it was being shown last January at NAMM as an electric guitar transmitter, Dattmore discovered, to his astonishment, that it actually fits perfectly on a YEV, as if it had been designed for it. Dattmore explains:

Now I want one. When's my next birthday?

I continued with my exploration of the ASTA Exhibit Hall, and I happened upon the editor of The Strad, Charlotte Smith. 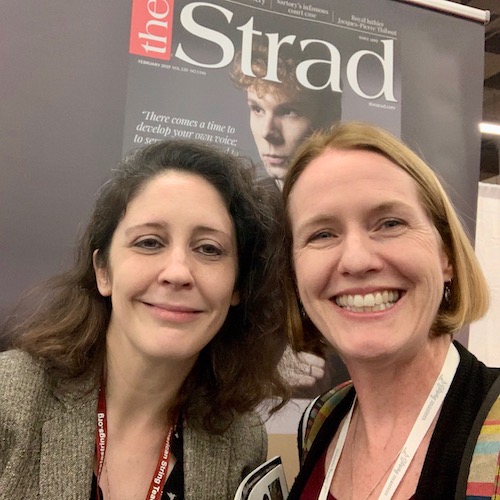 I snagged myself a free copy of the February edition of that magazine, which I immediately opened to smell the ink -- ahh this former newspaper reporter still loves that smell. The Strad was selling its new Best of Technique book as well as subscriptions to the magazine.

The Kun shoulder rest booth saw plenty of traffic, with teachers seeking these well-known shoulder rests, which are especially good for young students because they come in many sizes, all with adjustments, for fractional-sized violins. Most of my students use them! Here is Juliana Farha, answering questions. 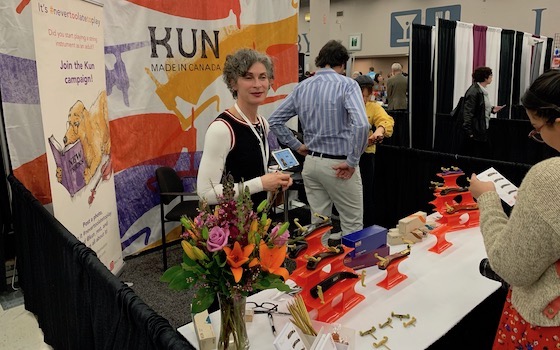 Kun is also doing a nice campaign called #nevertoolatetoplay, to encourage older learners by having them share their stories about starting later in life on an instrument. If you are reluctant to start an instrument because you feel you are too old, it's time to get over it and get started!

I found this lovely line of violins hanging out at the booth for the Tucson, Arizona-based Southwest Strings: 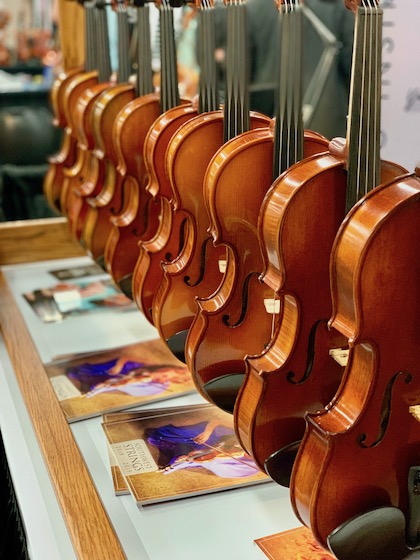 A line of violins at Southwest Strings>

In fact, there were many violins all over the exhibition hall, from student to fine violins -- I wish I had had time to test fiddles!

To my delight, I also ran into jazz violinist, teacher and composer Jeremy Cohen, whose Stylistic Duets for Two Violins have long been favorites and work really well with intermediate to advanced students, and anyone just wanting to have some fun playing. Today he showed me several more of his compositions and arrangements: his string quartet arrangement of Blue Rondo a la Turk (my favorite Dave Brubeck tune, hello!); Make Your Fiddle Swing; and the quartet that he then demonstrated with great humor below, called Tango Toscana:

Cohen also is part of a new online venture called String Masters, which allows people to take online, private lessons and also has online access to sheet music, etudes and teaching videos. They launched the project in conjunction with the ASTA conference.

Last but not least, I took home something very exciting from the Pirastro booth: a Pirastro KorfkerRest, which they have given me to test-drive, to write about for you. If I fall in love with it I may just lobby for a giveaway for Violinst.com readers and newsletter subscribers! 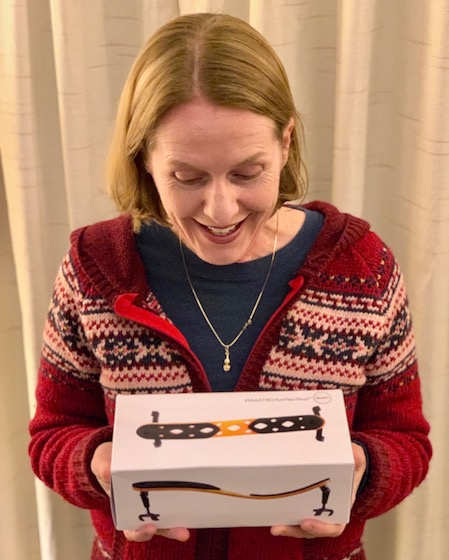 But back to the KorfkerRest, I'm ready to pitch my other unnamed shoulder rest, which just this week flew off into the air when I raised my violin to my shoulder during a lesson, narrowly missing my poor student! The KorfkerRest will get a nice workout, when I play Mahler 1 in the second violin section of the Pasadena Symphony next week. When I've lived with the new rest for a while, I will let all of you know if it is worth the rather hefty price tag! Meanwhile, I have to get the courage to remove it from the box and figure out how to adjust it (it comes with a toolbox)! More to come....

I should make myself more aware of this conference and what it does, and then help it expand its scope and influence upon Americana. Publishing The Sinfonia Collection would be an important contribution to start, I realise, and perhaps putting Tokyo Sinfonia rehearsal and performance techniques into published form would help a lot of young conductors. And players. Let me think about this.

March 11, 2019 at 01:42 PM · Thanks for this article Laurie. It is always helpful to know what's happening in the world of strings. I would love to attend sometime just to take in the sights and sounds. Though I guess this was primarily for string teachers which I am not.

As an aside, since youhave the electric violin and now an amp, I would love a future article on the advantages and maybe your experiences playing one as an experienced player. What you liked about it, why a person would want one.How it compares to an acoustic violin.Maybe we could hear it recorded?

I know you don't market on the forum, so I wanted to say that your product has made a great way for me to train my hand to stay in the right place on the neck. I am using it mainly as a training accessory taking it off periodically to see if my hand stays where it should. It seems to be helping! Thanks!

My booth was near to both Jeremy Cohen's and Yamaha shown in Laurie's videos above. Jeremy is a very charismatic guy, and you can hear how fun his music is. The Yamaha booth seemed to be a big hit with the young players as they came into the exhibit hall. Unfailingly, they would take out an electric cello and jam on it (usually with the amp turned up high....).

The overall vibe was great. There were folks from coast to coast and beyond. Most everyone was smiling, talkative, excited.

I wish I could have also checked out the education sessions, but I was a one man show in my booth, so I couldn't abandon my post. On Saturday, I didn't even have time to go grab lunch, so I subsisted on candies from the Connoley/Thomastic booth next to me and water.

March 12, 2019 at 06:33 PM · Sounds like a good time Craig! I hope you were able to get yourself a decent meal after that. Best wishes on your ventures with this product!

March 12, 2019 at 10:06 PM · Thanks for covering this Laurie! Looks like a good conference. It is always the week or two before our school's district festival. I don't have much of a chance of going, without my ensembles missing a rehearsal or two.