V.com weekend vote: Have you ever been part of a concert tour?

March 8, 2019, 12:33 PM · This week I've been in Albuquerque, N.M., at the annual American String Teachers Association National Conference, and I've enjoyed seeing not just teachers from around the country, but also young musicians. That is because several dozen pre-college student orchestras from all over the U.S. traveled here, some from quite a distance, to perform for the National Orchestra Festival.

It made me think about the tremendous work that must go into getting all of them here, with their instruments, and the work that goes into preparing their performances. I don't think I'm exaggerating if I say that the teachers who plan these kinds of activities are heroes, possibly saints! What an wonderful way to motivate students to practice, to cultivate community among them, and just to allow them the adventure of traveling. 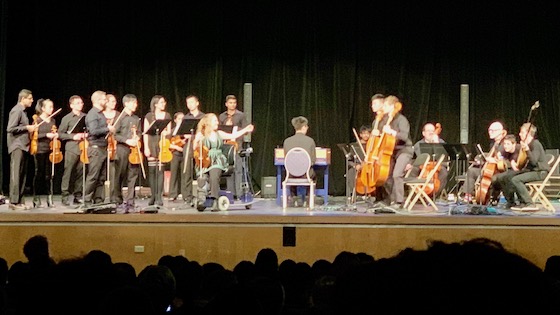 My high school orchestras and youth orchestras did not travel during the years I played in them -- I was dismayed to miss a trip to Vienna by about a year! As an adult I have played in a few run-out concert tours, but never a major tour.

Have you ever been part of a concert tour? Was it as a student? As a teacher planning it? As a parent helping out? As a pro? If you have actually planned one for students, please vote for that category! And if you planned something, do you have advice for others who would like to do the same?

And if you have either gone on a tour (small or large) with an orchestra, ensemble or group, tell us about it. Where did you go? What did it do for your group? What did your enjoy about it?

March 8, 2019 at 07:03 PM · In 2016, my son's orchestra (California Youth Symphony) traveled to Austria and Italy for a 4 concert tour over 12 days (CYS's senior orchestra plans a tour every other summer). My wife signed up to be an official chaperone, and my daughter and I tagged along for the ride. We stopped in Salzburg, Rome, Venice, Florence, Montecatini, and perhaps a couple other cities. It was so awesome to be able to visit these places with all of the young musicians. We did a lot of sight-seeing -- for example, we toured Mozart's home in Salzburg and we got to visit the Roman Colosseum. I can see how much work the organizers (including my wife) put into planning the tour. It was well worth the effort as the kids bonded during the trip and created memories that I'm sure will last their lifetime.

March 9, 2019 at 03:01 AM · Well, I never went anywhere on a concert tour, but I helped pay for a couple. My daughter went to China with her high school band and the following year she was on a tour to Japan with her high school orchestra. Then, I was in Paris one spring, taking a walk in a park when I heard a group of kids playing music in a small gazebo. I walked over and saw the name of my local high school on their sweatshirts. They were from my children's high school! I asked if they knew my kids, and they did! Small world.

March 9, 2019 at 10:02 AM · I voted 'As a student' but actually it was as an amateur. In our country (Netherlands) there are several community and project orchestra's who went on tours. For an (advanced) amateur violinist there was always a spot open to join. I joined a tour once with a project orchestra and it was great!

March 9, 2019 at 02:18 PM · I was on a tour around Warsaw for the centenary of Polish independence in November. Not technically a professional, but the group was definitely some semipro level.

March 9, 2019 at 05:36 PM · My youth orchestra, the Greater Buffalo Youth Orchestra, went on tour when I was a junior in high school. We took a bus from Buffalo down to Florida, stayed overnight at Fort Benning GA, and performed at Disney World.

Nowadays student tours are a lot fancier (and more expensive). My daughter went to Spain with her school orchestra a few years ago, and my son is preparing to go to Ireland with his school orchestra over this year's spring break. I think these tours are wonderful experiences, but they can be a little overwhelming. The airline lost my daughter's checked bag and she had to borrow concert clothes for most of her time in Spain. The bag caught up to her on the last day there!

My high school jazz ensemble did a tour of Toronto and Niagara Falls when I was 16. Those were the days when you could take a busload of people across the bridge from Detroit into Windsor without the slightest concern. I played the piano and got the distinct privilege of hauling around my very own 73-key Fender Rhodes. That was super fun.

March 11, 2019 at 03:13 AM · In 1975 I went to England and Scotland with my high school band. (I played trombone in high school, as well as violin in the orchestra). We played casual venues, mostly outdoors in parks. It was fun, and so interesting! I stayed with the tamer students, but I did hear of some other students involved in crazy things! Our band director was awesome...it was a fairly new high school and he had built the band and the orchestra basically from scratch. Louise K.

March 11, 2019 at 05:17 AM · Yes, did tours. Not with a classical orchestra, but playing amplified violin with a large Jazz band. It can be an exhausting life-style. A show every night in a different town , the next hotel, with a bus ride in between, for weeks at a time. Two age groups of musicians do this; the young and the older half-retired group. In between you want to stay home for the family the home, the day job.

The above said I had great fortune to grow up in my (now late) ASTA National President father, Ralph Matesky's, home, while witnessing Dad's beyond human devotion & extraordinary non stop efforts to take his Youth Orchestras on full-fledged Nat'l & International Concert Tours to Europe, and on the East Coast, playing huge orchestral concerts in Carnegie Hall, Constitution Hall (now Kennedy Center), at The White House, & throughout Mexico on two huge Orchestra Concert Tours. My father was an acclaimed String Teacher, Conductor & String Pedagogist in North America, renowned in Continental Europe, & Japan, for his numerous arrangements/transcriptions of major Orchestral Masterworks for elementary to professional levels of orchestra player/students' development. Dad spent Months in organizing huge Tours of his Orchestras while teaching at USC, & earlier on, being under Contract to RKO & Paramount Pictures in Hollywood, as a Violinist, Composer, Arranger & 'Ghost Writer' for Film, Radio & Television. His days, weeks, months & years were beyond Full with my Mother, Betty, (Arnold Schoenberg's Alternate Pianist w/ Leonard Stein, for Schoenberg's UCLA advanced classes in Theory, Form & Analysis + Orchestral Structure & Composition) also accompanying great musicians, Violinist, Toscha Seidel (Heifetz class-mate, in Leopold Auer's St. Petersburg famed class in Russia), Mitchell Lurie, great Clarinetist, Alice Mock, Soprano diva of Chicago's Lyric Opera, & Rita Hayworth, her Hi School friend, coaching Ms. Hayworth in voice for numerous auditions for roles in Hollywood films & playing for Rita Hayworth when her 1st Staring break role was offered & as is said, '... is History', plus later bringing up two children, (myself & sibling) + taking care of Dad, both as Wife, Soul-mate & musical partner. All time spent coordinating what would evolve into International Orchestral Concert Tours w/my Dad conducting his Youth Orchestras, took most time from just enjoying a quiet evening with my Mother & the 2 of us. But as Laurie Niles mentions, she wonders How string teachers, and Music in the Schools Supervisor's of Music, can even manage concert touring or an out of state trip to perform elsewhere?! It's a Full Time 'Job', yet doing what one truly loves isn't ever thought of as a 'Job', but a pleasure!! Unable to be at ASTA's 2019 National Conference in Albuquerque, NM, last week, I so much missed reconnecting with many colleagues ~ amongst them, Jeffrey Solow, great 'cellist & a former Stellar ASTA National President; Carl Fischer & Alfred Music Publisher, Inc., Founder, Morty Mannes, w/ whom Poppa worked tirelessly to help build his located only in Port Washington, NY, music publishing company into a globally known Company, having large portions of Ralph Matesky arrangements, transcriptions & compositions for all level school orchestras/ violin, published by Alfred, so successfully, Alfred moved to Van Nuys, CA, to keep up with demands for Dad's & other's to later come String Instrument et al publications!!!!

So many string & orchestra (+ Band) teachers in our Nation's public schools are true Servant's of Music, passing on all they know to their students and most with great devotion and love!! This is Music 'Education' at its highest premium, which most Great Violinist's have recognised thus far during my lifetime ~

In short conclusion: String Teaching is a Calling as the Order of Priesthood is a Calling, & what writers are compelled to do or Artists to Paint, etc.!! On this Fortieth Year Commemorative Anniversary of my father, Ralph Matesky's, Earthly Passing, I publicly & personally Thank Laurie Niles, Violinist.com Editor, for her service to Music from Day One & Up, & in also attending ASTA's 2019 National Conference, held March 6-9, 2019, in Albuquerque, New Mexico, by highlighting all my late father worked tirelessly for, for over 45 years, receiving the 1978 ASTA Distinguished Service Award, shortly before his untimely passing, here on Display!!!

My Gratitude and Lasting Thanks to you, dear Laurie Niles!!!!