February 23, 2019, 1:47 PM · This week we are giving away five signed copies of Chee-Yun's newly-released CD, Sentimental Memories. The crossover CD of popular sentimental songs and pieces, arranged by Kenji Bunch, is newly released in America, but it has actually been a hit in Korea for a long time, having been released there 17 years ago! You can read more about it in our interview with Chee-Yun. 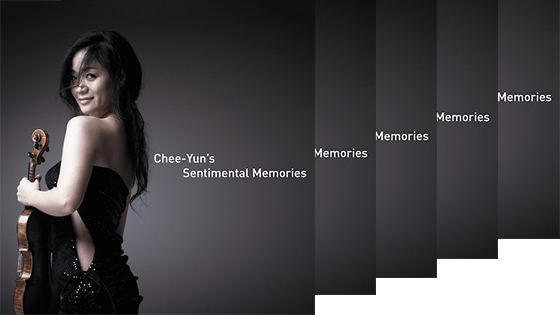 Entering to win a copy of this CD is as easy as registering for Violinist.com and our newsletter, then responding to this post. If you have not yet created a Violinist.com account (it's free and takes only a moment), you can do so here. Then just sign up for our twice-weekly newsletter here. It's the best way to stay in touch with all the news and advice we publish. Contest is open to residents of the U.S. who are 18 or older.

To enter, make sure you are logged in, then simply comment below by telling us your favorite sentimental song - the cheesier the better!

(BTW the songs on her album include: Ave Maria by Caccini; Old Romance by Svirodov; Oblivion by Piazzolla; A Song from a Secret Garden; I Dreamt I Dwelt in a Marble Hall; To Trengo Fevigl Sits Okto; Love Theme from Cinema Paradiso; Somewhere in Time; Nadia’s Theme; What’ll I Do; Hymne a L’amour; As Time Goes By; Stranger in Paradise; Lascia Ch’io Pianga..I think that's all!)

Must again be very thankful for this forum-a member's kindness allowed me to obtain a copy of this great short piece.

Applogies for it not being a song-I am not well-learned in famous or important sentimental, popular songs. Just thought the piece does convey these feelings.

Here it is, with Barbra Streisand:

And with Jane Monheit:

Just last Friday I heard this piece sung live by Isabel Leonard (spectacular!) with the Czech National Symphony Orchestra (led by John Mauceri) on their tour celebrating Bernstein's 100th birthday -- so of course it was an all-Bernstein show. I saw them at Virginia Tech's flagship performance venue, the Moss Center. If you can catch this tour, it is not to be missed.

Then on Saturday I had a restaurant gig playing the piano with a bassist friend of mine, and I took my own turn with "Some Other Time," doing my best to channel my inner Bill Evans. Evans recorded it at least three times (once with Tony Bennett).

My wife and I had a simple wedding at the Japanese Gardens near where I live. It was amazing and I didn't believe it could get better. We didn't get a honeymoon and we didn't care. That night, though, I walk into our livingroom and she turns on "At Last" by Etta James. We danced to that song and it was better than anything in my dreams.