"I was so uptight, so afraid that I would not be taken seriously as a classical musician," Chee-Yun told me. Little did she know that the album, which this week is being released for the first time in the United States as Chee-Yun's Sentimental Memories, would become a hit in Korea. 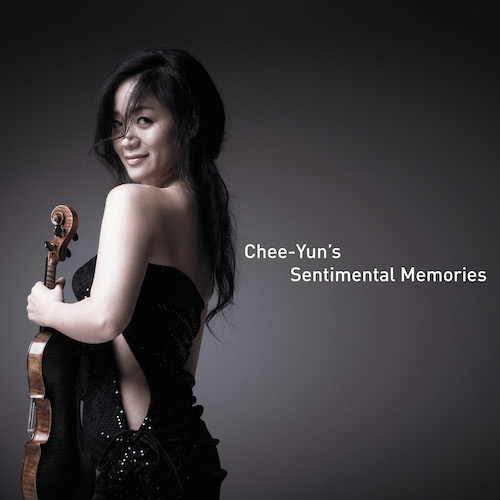 "This album in fact brought me closer to so many more audience members, people who may not have been interested in classical music in the beginning, but then this album helped open their minds and their eyes to it," Chee-Yun said. "A lot of the tracks on this recording also became the background music for a number of Korean dramas that are now world-famous, as well as short series dramas that were popular at the time." Those included such dramas as "Rustic Period" and "Stairway to Heaven." "My parents would be watching TV, and they would say, 'We heard your music!'"

"I became well-known among young mothers; they were having children and listening to my album," she said. "I would be signing CDs and literally most of my audience members were young mothers with their children. Now some of those children have grown up and they still come to my concerts!"

"So sometimes when you think outside of the box, good things can come of it."

Of course, no one can doubt Chee-Yun is a serious classical musician at this point. Her biography includes an impressive list of accomplishments: early in her career she won Young Concert Artists International Auditions and also an Avery Fisher Career Grant. She studied with Nam Yun Kim and at Juilliard with Dorothy DeLay, Hyo Kang, Daniel Phillips, and Felix Galimir. She continues to perform regularly as a soloist with orchestras around the world and as a recitalist, and has recorded numerous classical albums, including the Vocalise; Lalo Symphonie Espagnole and Saint-Saens 3 Concerto; the Szymanowski and Franck Violin Sonatas and more.

Sentimental Memories is a compilation of popular tunes, some which were popular at the time in Korea, others favorites of Chee-Yun's. The idea for it came from producer Ettore Stratta, who had created a successful classical crossover album with the Korean soprano Sumi Jo called Only Love and wanted to try something similar with a violinist. It took some convincing, but Chee-Yun agreed.

"They had come up with a list of music they thought was great, and I came up with my own," she said. For example, Chee-Yun chose the 1970s hit "Nadia's Theme" -- a song made famous both by its association with Olympic gymnast Nadia Comaneci and also by the America soap opera, The Young and the Restless. "When I first came to America I thought watching T.V. and practicing my English would help me speak the language faster and better, so I used to watch 'The Young and the Restless'!" Chee-Yun said, laughing. "That was my daytime drama choice, and so I wanted to get 'Nadia's Theme' arranged!"

She chose "As Time Goes By" from the movie "Casablanca" because her father was a big fan of Ingrid Bergman. "He loved to watch her movies and we used to have a videotape of 'Casablanca' at home," she said. "And I love jazzy music; I'm not a very good singer, but if I could sing, I'd love to be a jazz vocalist. So I thought, maybe I could mimic that with the violin, which is what I was trying to do with 'As Time Goes By.'"

Also, "in 2002, it was still the beginning of Piazzolla's music becoming super-popular in the West," Chee-Yun said, and that is one reason why she included Piazzolla's "Oblivion." Other pieces on the album include "Ave Maria" by Giulio Caccini; Ennio Morricone's "Love Theme from Cinema Paradiso," John Barry's "Somewhere in Time," and a host of other sentimental songs, film music and short pieces.

When everything was selected and ready to go, there was a bit of drama: their musical arranger fell through, leaving her with no arrangements to play. She had to find an arranger and get those songs arranged, with just two days before the recording sessions were to begin. She turned to a friend she had met through Young Concert Artists, the violist and composer Kenji Bunch.

"Kenji is a phenomenal violist who can do classical, bluegrass, jazz, and improvise," Chee-Yun said. "He stepped up and saved the day."

They worked through the night. "I didn't sleep for 48 hours!" Chee Yun said. "Kenji did such an amazing job arranging it."

One of the challenges in arranging songs for violin is the fact that songs rely on lyrics, and obviously, the violin cannot sing words. Playing the melody line over and over simply will not create interesting music. To compensate for that, one must do something a little more clever: add a turn here and there, put the melody up an octave, add some texture. "The way Kenji arranged it is so that even as a classical musician, you don't feel like you're just playing amateur elevator music."

In fact, few times she felt like she got to custom-order the arrangement, as in "Old Romance" by Georgy Sviridov.

"It has this beautiful, very virtuosic ornamentation that happens while the quartet and the harp plays the main melody," Chee-Yun said. "For that part, for example, I told Kenji, 'Kenji, make this so that it doesn't sound like I could just sight-read this part! Could you put a huge scale going up here, and arpeggios, and many more notes and then octaves here?' It was like a custom order, but that is also why it was so fun making it: having that amount of involvement. And he was just so quick in coming up with everything, too. He would write the part, and then I would start practicing, practicing, making it my own, putting down different fingerings, different strings for different colors. I look back at it fondly now, it brings back good memories."

February 23, 2019 at 08:03 PM · Greetings everyone, we are giving away five signed copies of Chee-Yun's new CD, if you are interested, click here to enter to win one!