February 18, 2019, 10:28 PM · This Sunday, Samuel Thompson will perform a concerto that few violinists have performed before: the Violin Concerto No. 1 by Florence Price (1887-1953). The concert, A Celebration of African-American Composers, features the Capital Philharmonic of New Jersey, conducted by Daniel Spalding. 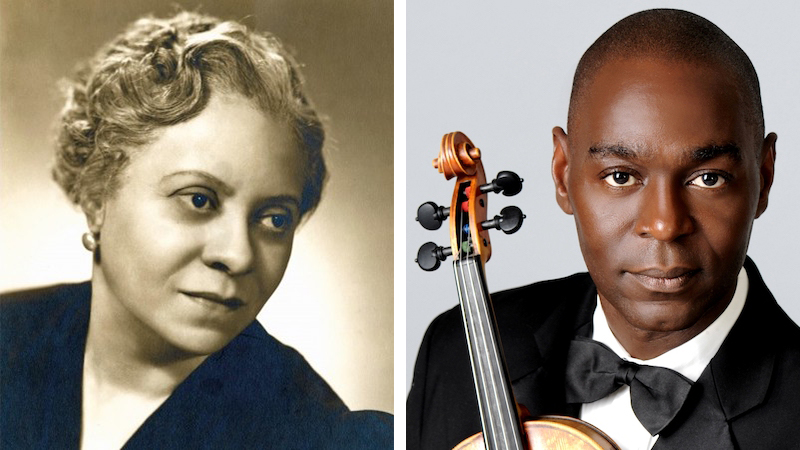 Price was the first African-American woman to be widely recognized as a classical composer and to have her work performed by a major symphony orchestra. Her first violin concerto was written in 1939, but the work apparently was not performed in her lifetime, nor was it even discovered until 2009, when a couple renovating Price's former summer home found a pile with dozens of manuscripts, including two violin concertos by Price.

"It's a tremendous opportunity -- and a big responsibility," Thompson told me in a conversation over the phone last week. Thompson is a violinist with a wide-ranging career, having appeared as soloist with orchestras throughout the United States and also working as an orchestra musician, educator and arts journalist (having contributed many blogs to our Violinist.com community, among other publications).

Price's violin concertos gained new life a year ago, when violinist and professor of violin at the University of Arkansas Er-Gene Kahng released the first recording ever made of both of Price's violin concerti. Price was a native of Little Rock, and the University of Arkansas houses many of Price's papers and manuscripts, including those discovered in 2009.

While Price's second violin concerto, written in 1952, was performed (without orchestra) at the dedication of the Florence B. Price School in Chicago about 10 years after Price's death, there is no record of the first violin concerto ever being performed, before Kahng's recording.

"The second concerto is a one-movement piece, it's really beautiful and lyrical and challenging in its own right; that one seems to be getting a lot of play," Thompson said. Kahng has performed it several times around the U.S., and several other performances are coming up later this year.

The first concerto has some quirks. For example, the first little lick in the solo entrance is likely to make any violinist do a double-take, it so clearly references the opening of the Tchaikovsky Concerto. There are several such references, tiny samples that come out of the blue, emerging from and launching into entirely different musical ideas from their original sources.

"We're talking about a woman who was very well aware of what was going on in the world, compositionally, as well a woman who had by this time developed her own musical language," Thompson said. "There are a few places in the cadenza and the coda of the first movement that, one could say they are reminiscent of the Tchaikovsky Concerto. But even with that, there is still Ms. Price's own language; these references are not made in a manner that would make one assume that Ms. Price was not a composer of consequence."

To learn the piece, Thompson found himself using a copy of Price's solo manuscript, the score manuscript, and an engraving made by scholars at the University of Arkansas. He also consulted with Kahng.

"It's been a pleasure talking to Er-Gene about Florence Price, getting performance advice from her, and having access to manuscripts," Thompson said. "G. Schirmer just acquired the rights to all of Price's manuscripts in November of last year, so it's going to be interesting to see what happens to all of her works, and particularly this concerto."

Something that Thompson and Kahng have wondered about together is: "if this piece was not performed, did Florence Price have a 'Joachim'? That is someone who she could send it to to get some violinistic advice?" The manuscript still leaves questions, "and the questions even go to the first two notes when the violin comes in."

The illustration below shows the different rhythms notated for the first notes of the solo entrance: 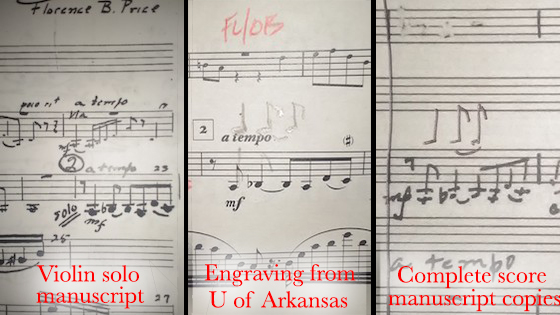 "The concerto is written in three movements. The first movement is both lyrical and virtuosic, and it's very American. There's a lot of rhythmic intensity as well." Thompson said. "The second movement is one of the most beautiful second movements I think I've ever heard. Harmonically, the opening is a very reminiscent of a lot of the B-flat major movements that we have, like Saint-Saens and Elgar, but it's a musical statement in its own right. Somebody described it as having the stillness of an Arkansas night -- Florence Price, like William Grant Still, was from Arkansas. The last movement is pretty special, it's kind of a jaunty scherzo in 6/8."

"One of the things that has been really magnificent about this is that there is a level of scholarship around her work that has existed, that I'm just scratching the surface of, and it's so fascinating." When it comes to playing the piece, "It's definitely accessible, but it definitely has its challenges."

February 19, 2019 at 06:04 AM · Exciting times! I've been a proponent of lesser-known composers for a long time, so I felt amazingly privileged to have been in the viola section for Er-Gene Kahng's most recent performance of Price's second concerto, just this weekend. (Karen Allendoerfer was in attendance, by the way!) I heard about the upcoming Thompson performance at a reception after the concert. Looking forward to seeing more violinists add Florence Price to their repertoires.

February 19, 2019 at 06:24 AM · Congratulations to Samuel, and thank you for this interesting blog! I hadn't realized there were two rediscovered Price concertos until this weekend. I just saw and heard Er-Gene Kahng play the 2nd Price concerto last Saturday night, with the Camellia Symphony in Sacramento.

I had met Er-Gene once before, 10 years ago, when she won the Young Artist's Competition for the Arlington Philharmonic, my former orchestra. I remembered her and it was really fun to see her again and reconnect, all the way across the country!

February 19, 2019 at 04:38 PM · I can't wait to hear recordings of the Price concerto performances - I'm very interested in her violin oeuvre!

February 19, 2019 at 06:24 PM · What a grand privilege you have! Big congratulations! I'm looking forward to listening to this if it's on YouTube, or somewhere else! And so wonderful that this gifted composer's music will now be available to not only enrich our lives and the world of music but teach us new things that only Ms. Price can do through her works. What new inspirations will these works inseminate in up coming and future compositions and composers? Happy will be those who have to privilege to see! I wish I could hear your performance... Royce

February 20, 2019 at 02:43 AM · Thank you for this article..it's been an education to me. I had no knowledge of Florence Price or Er-Gene Kahng, even though I live in Arkansas. You can hear Er-Gene play some Florence Price pieces on her website: http://www.ergenekahng.com/music. Look on the right-hand side.

February 20, 2019 at 10:17 PM · Interesting, I heard a recording of the first concerto last night (19 Feb 2019) on WQXR. Very good concerto with a lot of references to other composers as well as a lot of her own ideas blending them all together.