December 19, 2019, 1:54 PM · Welcome to "For the Record," Violinist.com's weekly roundup of new releases of recordings by violinists, violists, cellists and other classical musicians. We hope it helps you keep track of your favorite artists, as well as find some new ones to add to your listening! 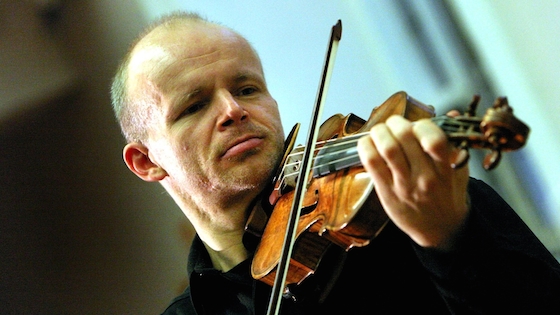 This is the second recording of Bach's "Sei Solo" Sonatas and Partitas for violinist Thomas Zehetmair, who first recorded them in 1982 using a modern violin. This time Zehetmair uses period instruments, including two Baroque violins with replica bows: a 1685 South Tyrolean instrument for the partitas, and a ca. 1750 Joannes Udalricus Eberle for the sonatas. Recorded at the Propstei St. Gerold, a church in Austria, the double CD includes program notes by Peter Gülke and Thomas Zehetmair. BELOW: Zehetmair performs the first-movement "Allemanda" from Bach's Partita for Violin Solo No. 1 in B Minor.

"Louis Spohr's reputation as one of Germany's leading violinists was at its height when he composed his Duets for Two Violins, Op. 39, and while it appears his intention was to finance an Italian concert tour with marketable duets, the publishers complained of their technical difficulty. Spohr defended this aspect by stating his desire to 'give my duets more inner value, more richness of harmony than is usual in this genre.' Indeed, a contemporary critic exclaimed that it is no exaggeration to say that the ideas and artistry required for these works would be sufficient to create three concertos." This volume includes Spohr's three Op. 39 duos; Spohr Violin Duets, Vol. 1, released in 2018 includes Spohr's three Op. 67 duets as well as the unnumbered 1796 Duet No. 3 in E flat major. BELOW: Violinists Dickenson and Cooper perform Grand Duo for 2 Violins in D Minor, Op. 39 No. 1: III. Presto

December 20, 2019 at 12:38 PM · I can only confirm the quality of the Spohr duos. I bought a bunch of them--including op. 39 and 67--once when I suffered from massive overestimation of myself (and was bored by the duos I already possessed). I can--unfortunately--also confirm that they are very hard indeed. Often long stretches in 4 voices. One of them is for violin and viola and is one of the easier ones (everything is relative) and also very good.

There are some recordings of a few of them (including the violin/viola one) but it is very good that someone is recording a larger set.

I do think many of them are more interesting than Spohr's concertos.