André Rieu to Fund Music Lessons for 1,000 Children in the Netherlands 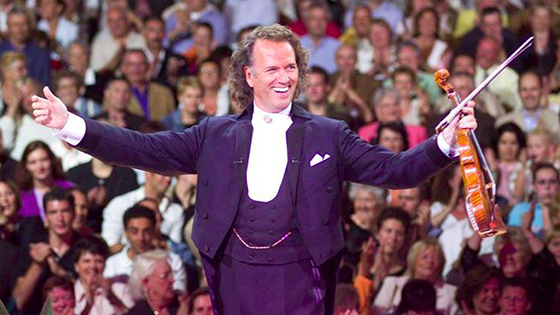 Rieu said he would like to give children who can't afford music lessons the opportunity to learn how to play an instrument.

"I would like to give these children the pleasure of making music," he said. "My orchestra members and I know how much fun it is to make music every day, and to make millions of people happy with music night after night. We were all given the chance to have music lessons since our childhood and were fortunate to learn how to play an instrument. So we may understand better than anyone else what it means, if you do not get that chance to be involved with music as a child."

The culture foundation set up a "André Rieu Relay Fund" which Rieu will fund for the first year, then they will seek another benefactor to continue funding the music lessons for the following years.

As we know, it takes far longer than one year to learn to play the violin or any other instrument; so we can only hope that the fund is able to continue supporting music education for those children for years after Rieu's initial donation.

Rieu, based in Maastricht, leads some 100 concerts a year with his waltz-playing Johann Strauss Orchestra, filling enormous venues with adoring fans. The sets for his shows are elaborate; over the years they have included things such as ice rinks, fountains and ballroom floors. The ladies in the orchestra wear colorful ball gowns; orchestra members sit on golden chairs. There are dancers and other performers. Beyond his shows, he's sold more than 40 million record albums. More than 5 million people follow his Facebook page, and his YouTube videos have tens of millions of views. On Dec. 21 he will perform a Christmas concert in Maastricht.

"I like George Foreman also" - but I have only occasionally used his grill, and I've never watched him box - or play the violin.

"Rieu is the Joel Osteen of the violin" - that's going far too far, Rieu can't be THAT damaging or dangerous.

What would people on here have thought of Jean Pougnet. And what did people think of André Previn?

December 6, 2019 at 01:10 PM · Rieu is pure wholesome entertainment. I wouldn't say that he's the Joel Osteen of the violin. Lawrence Welk, maybe.

December 6, 2019 at 02:28 PM · For someone who lived in Germany (West Berlin) for many years and listened to German Radio and TV, the "GALA" performances were everywhere. I know in the 70's there were many varieties and were very popular. They even had quiz shows featuring these kind of performances like "Erkennen Sie die Melodie?"

I believe that Rieu's performances echo this popularity but in a rather "over-the-top" way. Maybe it's not "serious" (aka stuffy) but it's FUN :)

December 7, 2019 at 07:42 PM · Granted Rieu is anything but "serious" with his repertoire, the Wedding Cake Dresses, the beer swigging brass section, and the overall schmaltz of the performances. Yet, he does draw a crowd of people who don't have grey hair, that just might also like "serious" music as well, they might also like chamber music and possibly be amateur musicians themselves.

On top of that Rieu employs more women musicians than any of the "Serious" European orchestras I have seen broadcast TV.

Ok, I have seen more than a small amount of rosin on the end of his fingerboard during close shots of him playing.

I also have a group of professional teachers who are willing to scholarship my students when I get them through third position as well as all the negative behaviors common to all starting young musicians. My young musicians practice, regularly come to lessons, and appreciate what they are getting.

FWIW: My personal, albeit guilty pleasure music that I play just for me includes Broadway Show tunes, Movie themes, and Episcopal Hymns.

December 8, 2019 at 06:50 PM · You don't have to like his shows, but, he draws big audiences, sells recordings, provides employment for many musicians and crew, and rediscovers some obscure material from the Vienna dance-hall era. He is a good player. What the mainstream classical world can learn from him is that the visual impact of a production is also important.