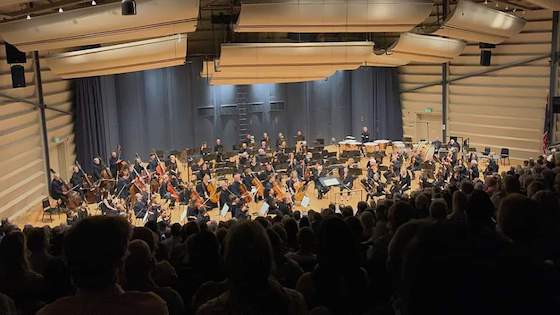 Representatives for the Grand Teton Music Festival said that because the orchestra is an invitation-only ensemble, it is inaccurate to categorize the non-invitations as terminations.

"The selection of this orchestra has been invitation only for its entire existence," CEO Todd told the Jackson Hole Daily. "Each year there’s occasionally people that are not invited."

"The commonality among these three musicians is that each openly expressed grave concerns of the musicians at weekly scheduled 'town hall' meetings organized by the festival’s management this past summer," said the musicians' press release. "While town hall meetings typically provide a safe and open forum for discussion, these meetings appear to have done the opposite. The terminated musicians expressed collective concerns surrounding new directions that the festival appears to be going in at the direction of President and CEO Andrew Palmer Todd – a shift that places more focus on the festival as a presenting organization of outside, one-off performers, and less focus on the foundation upon which the festival was built nearly 60 years ago, its internationally recognized orchestra, made up of musicians from the nation’s top orchestras and learning institutions that come together each summer for the seven-week festival."

Representatives for the Grand Teton Music Festival said that "we cannot comment on the specifics of any personnel issues" and that "the festival’s orchestral concerts remain the heart of the festival."

November 25, 2019 at 06:46 PM · Were these players currently under contract? Does this orchestra give its musicians tenure? If it's really just a glorified freeway phil where they renew everbody's contract every year, and the new sheriff in town opts for turnover in his personnel, seems like that his prerogative, at least legally. On the other hand it certainly doesn't pass the smell test when the players you don't renew are the ones that raised concerns in meetings. Petitions and boycotts are fine but will only be effective if the positions aren't backfilled by the hordes of young players eager to burnish their CVs or orchestral players looking for a paycheck during the lean months. There would need to be solidarity. Did I miss something here?

November 25, 2019 at 07:20 PM · Inviting musicians to participate in a “town hall discussion” and then “disinviting“ them from the festival for the views they expressed is certainly not normal in this festival’s storied past. Attempting to normalize it in soundbites however… perhaps it’s a sign of the times. -G Ewer

November 25, 2019 at 07:35 PM · This is the downside of making a career of participating in arts organizations that started in the monarchies of old Europe. Everything's fine, when you're popular with the king. But, then a new King is appointed by the moneyed elite who pay the checks, and he or she may not like you. So, you're out. All of your hard work, ability, and commitment mean nothing. In their eyes, you're just another worker bee who deserves the sack. There's got to be a better system!

November 25, 2019 at 07:57 PM · If unfounded, the accusations of "comportment” and 'disruptive behavior" could be proven libelous.

November 25, 2019 at 08:53 PM · Libel is a different thing -- "a published false statement that is damaging to a person's reputation." The musicians, in the petition, stated that the Grand Teton Music Festival gave this as a reason for not re-inviting the musicians (presumably in letters to the musicians, though this is not stated), but the GTMF has not made a public statement using those words.

If that was a reason that was stated in writing, though, yes, there are still some potential issues.

November 25, 2019 at 09:37 PM · It seems like many institutions regardless of core focus are moving towards top-down management, silence the 'workers' and show a disregard for their needs let alone opinions. Shouldnt GTMF musicians be judged on their musical merits, not their abilities to pander to managements' story line? We learned in elementary school that a committee member represents and a town hall is a forum to make that representation clear. What could possibly be 'disruptive' about such representation? Thanks for the link, I'm signing.

November 25, 2019 at 10:24 PM · American law is a very practical discipline. Whether anything is libel or not is determined empirically, by the outcome of the suit, if even there is one.

November 26, 2019 at 05:34 AM · The Executive Director & Board have stepped into matters that are the concern of the Music Director. Removing these 3 musicians, who were chosen by their peers to preserve & protect the festival, is typical of authoritarian leaders everywhere in every field.

December 1, 2019 at 03:05 AM · I emphatically support the petition to reinstate the musicians, who are more than qualified to do their job, and shouldn’t be fired for expressing an opinion. I also emphatically disagree with the “change of direction “ to go towards more high dollar pop star single performances. there are plenty of venues across the world already set up for that. GTMF is a world class tradition of the best classical music you could hear anywhere.