November 13, 2019, 3:49 PM · Recording musicians are fighting for a contract that would allow them residuals from films and TV shows that are made exclusively for streaming platforms. 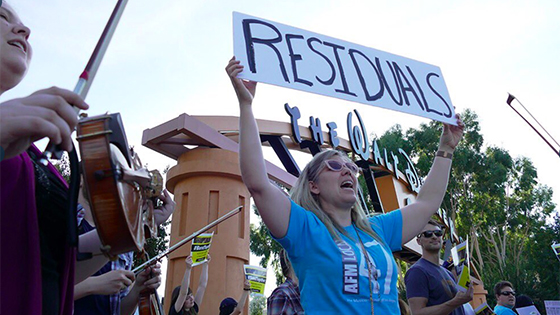 On Tuesday, the day that Disney launched its new DisneyPlus streaming service, members of the American Federation of Musicians (AFM) Local 47 in Los Angeles held a "Rally for Residuals" outside the Walt Disney Picture company lot. The contract is so important for recording musicians that the union has mobilized a national campaign called #BandTogether, with rallies held in Nashville and New York as well.

While directors, actors and writers do receive streaming residuals, musicians do not.

"Residuals generally make up 75 percent of our pay for a project," said violinist Joanna Maurer, of AFM Local 802 in New York, where musicians held a rally outside Disney Streaming Services headquarters in Chelsea Market earlier this month. "So, when we record soundtracks for streaming platforms, we’re working for a fraction of what we usually make on traditional film and TV productions. Same work, 75 percent less pay."

At issue specifically is the AFM's contract with Alliance of Motion Picture and Television Producers (AMPTP), which expires Thursday. AMPTP represents companies such as CBSViacom, Disney/ABC, MGM, NBCUniversal, Sony, and Warner Media. Musicians are currently covered by an extension to their 2015-2018 contract, which does not include streaming residuals. Directors, actors and writers, represented by the Directors Guild of America (DGA), the Screen Actors Guild-American Federation of Television and Radio Artists (SAG-AFTRA) and the Writers Guild of America (WGA), have had streaming residuals in their collective bargaining agreements with AMPTP for several years. The AFM seeks to add streaming residuals to the musicians' contract as well, asking for musicians to be paid in a similar way as directors, actors and writers: with a sliding scale percentage of a fixed-base amount over a 12-year period of streaming exhibition.

Film composers have joined with statements of support. Composer Hans Zimmer, who wrote the music for the movies Interstellar and Inception among many other scores, said: "I am consistently indebted to the amazing musicians I work with for bringing their talent to the music we create together. It is their work that really helps to bring these films, television shows and projects to life. They have my full support as they head into negotiations so that they can be fairly compensated for their fantastic work."

November 13, 2019 at 10:19 PM · As a violinist who works under these agreements, I'd like to thank you for posting this. Like many other middle-class workers, scoring musicians have been squeezed by our ever-wealthier global media employers over the past few decades as they've extracted concession after concession. The tiered wage scales we use in traditional media incorporate generous discounts on our "front end" wages because the added value, over time, of "back end" payments makes it possible to earn a living. Not only do the producers wish to eliminate the back end entirely for streaming media, but also to use the lowest of low budget scales for every project! They also want to eliminate meal break provisions, overdubbing rules, even the requirement for hourly breaks that have been standard for decades. Quite simply, the situation is unacceptable and will result in a decimation of the music community - particularly in L.A. and New York, but also globally, wherever soundtracks are recorded, as this new low water mark would drive down everyone's wages. This is why unity and solidarity among musicians GLOBALLY is sorely needed right now! Please #bandtogether and support the campaign!

November 14, 2019 at 12:41 AM · I for one, am shocked that the musician's union didn't secure these rights and wages long ago, but evidently they've been too busy giving concessions! The idea of a global union is a great one, no matter what the industry. If there were a global union it would be hard to just pick up and move to another country when every unreasonable demand isn't met. You would have to stay at the table and negotiate.