November 11, 2019, 10:19 PM · Crowd-pleasing fun dominated Ray Chen's recital with pianist Julio Elizalde at Disney Hall last Wednesday, but for me the highlight of the evening was also the most sober offering -- the "Chaconne" from Bach's Partita No. 2 in D minor for solo violin, written in the early 1700's.

Chen, a popular soloist who won first prize at the 2008 Menuhin Violin Competition and the 2009 Queen Elisabeth Competition, is known for his humorous and down-to-earth presence online -- for example, his comedy videos on Youtube, serenading a horse on Facebook, and the fact that he takes hundreds of selfies with fans after every single performance he plays.

But make no mistake, Chen has a serious side, and on that side, the Chaconne looms large. In an interview last week with Violinist.com he shared that his feelings for the piece run so deep that he waited to learn it until after he had won the Queen Elisabeth, and that "I'm still learning it -- it's definitely something that you add layers of depth to, with each passing year."

Chen's performance of this work came right after intermission: stage lights changed from purple to light blue around him, and he took the stage alone. The piece begins with a strong statement, flowing into something more introspective. Each note rang like a bell from the 1715 "Joachim" Stradivarius violin that Chen plays - a violin of the same era as this music, made just a few years before the "Chaconne" was composed.

As music accelerated, Chen played with the possibilities, entering a number of different tempo zones. If you think of tempo as you think of your heartbeat, it beats at one tempo when you are sitting, another when you walk, another when you grow emotional. The heartbeat of this music slowly accelerates, moving through the first section of the Chaconne, until we land at the "bariolage" section -- with many string crossings. Here the notes move quickly, though the chords are more static. In Chen's hands this calmed to a ghostly chill, the flurry of notes like ghosts flying in circles. I became conscious of how spooky this music gets - growing ominously until the return of the opening notes of the piece, which bookended this section in such a grand way, I worried that everyone would clap and break the spirit.

But they didn't -- attention was glued to Chen, who kept the stillness and then brought in the second section with the solemnity of entering a church. By this time he was in a zone -- the notes flowed with inevitability, the themes were obvious and the voices made sense. The third chapter of the piece is a return to the beginning, as Chen described earlier, a return that bears the experience of having gone through the struggles of the first two sections. He played it so poignantly - it brought tears to my eyes. It seemed not only a return to a musical theme, but also an echo of another time. Bach are you here? It was slowly spinning, then winding, then climbing and struggling to the end - another return to the beginning. What a performance.

The recital actually began with somewhat less soul-wrenching fare: Chen and Elizalde opened with Grieg's Sonata No. 2 in G major, Op. 13, a theatrical and mercurial piece. When faced with a fast passage, Chen smiled like a guy who likes driving fast and was just given the keys to a racecar. He's not going to take it cautiously; he's going to see how fast it can go. That was also the case during the final movement of Saint-Saëns Violin Sonata No. 1 in D minor, Op. 75, when both musicians played in unison, as fast as I've ever heard the piece played. It was quite a feat of courage, live, and both smiled with exuberance (and possibly relief) when it was over.

At the intermission I couldn't help but notice how many fellow violinists were in the audience: students from Colburn and USC, Suzuki students, colleagues from the LA free-lance community -- plenty of people with those little red scars on the sides of their necks from playing the fiddle!

After intermission and after the Chaconne came Alexandre Roelens' arrangement for violin and piano of Debussy's "Clair de Lune," made popular by Jascha Heifetz and David Oistrakh. The violin part is a fairly simple ride over the piano's more interesting chordal work, but what a beautiful piece, and well-played by these two. 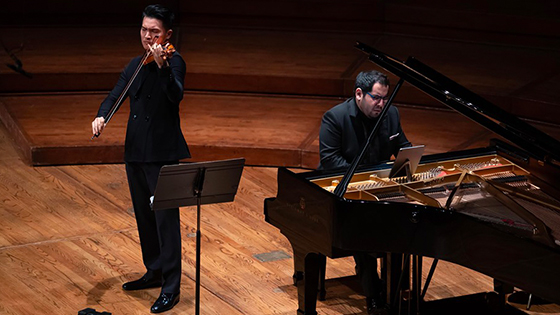 Ravel's "Tzigane" was slinky and humorous, careening between careful calculation and wild chaos. Chen certainly showed his theatrical side, as well has his considerable chops. (BTW did you know that Tzigane was made into a choreographic fantasy by George Balanchine? I learned this while waiting in line after the concert for a Ray-selfie, talking with a violin mom who also happens to be a dancer - wow!)

First was "A Evaristo Carriego," a tango that Chen and Elizalde arranged after being inspired by a night at a tango club while on tour in Buenos Aires. It was in turns sultry, exciting, full of attitude. In fact, here is a video of them playing it:

After more ovations came a version of Monti's Czardas. "We've added a few notes..." Chen said with a smile. Indeed, they took a great deal of creative and amusing license on the original, which is familiar to so many violinists and students.

The third encore was John Williams' popular theme from the movie "Schindler's List," played with a kind of beautiful old-world sound and pathos that make me think of Chen's mentor, the late Aaron Rosand.

And finally, after even more cheering, Chen ended the evening with Kreisler's "Tambourin Chinois."

When it was over, Chen greeted his fans -- a line of which stretched across the length of the lobby and back. Selfies for all, even me! 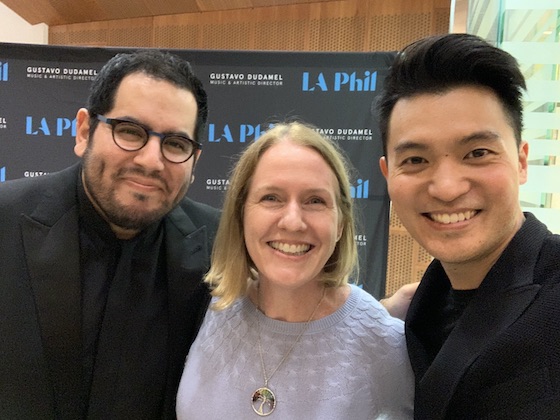 My term for this scar is "the mark of the covenant."

Maybe next time instead of a selfie Ray might play a few bars of the Bach Double with you.

November 13, 2019 at 11:58 PM · What a marvelous performance on many levels . Ray Chen seems to be unique. He lets the audience know he’s enjoying every minute of his presentation, while negotiating the intricacies of challenging violin playing. What an exciting combination of music and emotion. This was a concert not to be missed. Julio Elizalde was an amazing partner with Ray Chen. His contribution must not be understated. Laurie Niles, thank you for your knowledgeable and heart felt review of this concert.

November 15, 2019 at 01:17 PM · Beautifully written! You made me desperately want to have heard this concert! (My sister saw "Tzigane" danced recently and NY City Ballet and loved it! It remains in their repertoire.)