Major, headline-grabbing fires were hungrily devouring brush on the hills surrounding the city. A quick check showed the humidity in the air at 10 percent at the time of violinist Joshua Bell's concert with pianist Alessio Bax - it had been extraordinarily low for days. Violins don't like such extremes. That morning, when I took out my own violin, I discovered that the G-string peg had slipped - no, completely given way, allowing the string to unwind. As I fixed the G, the A string peg lost its grip, and then over the next 10 minutes every single string on my violin unwound itself in succession. I've had pegs slip, but this was unprecedented. For the remainder of the day, my students reported strange problems with their violins as well: "The string unraveled and nearly came off!" One boy's wooden bow simply snapped at school. "I didn't do anything, I swear!" he said. I believed him.

Thankfully for Bell's 1713 Huberman Stradivarius violin, the humidity at Walt Disney Concert Hall is well-controlled. If the lack of humidity caused any problems for these two artists, I could not detect them. 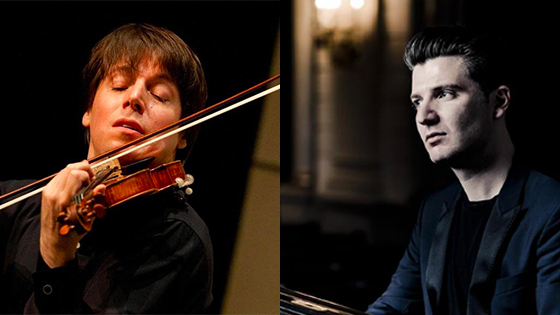 In fact, a little musical journey that wound the clock back a hundred years or more proved a much-needed getaway in this smoke-choked city. It was a program that largely emphasized Bell's connection with several great violinists of the late 19th and early 20th centuries: Eugène Ysaÿe, who taught Josef Gingold, who taught Bell; and César Franck - whose gorgeous Violin Sonata in A major was a wedding present to Ysaÿe in 1886.

The Franck Sonata - which Bell also played here in 2015 with pianist Sam Haywood and recorded in 2012 with Jeremy Denk, was the highlight of the evening, showing both Bell and Bax at their finest.

From the beginning, Bell played this piece like he owns it. Bax's delicate piano playing allowed dynamics to grow organically and individual lines in both instruments to emerge through a texture that is at times dense with notes. Franck was an organ player - one with great big hands, who wrote a florid and demanding piano part for this sonata. Bax seemed to savor every important note while letting the others float by -- with pinpoint accuracy, like a flurry perfectly-crystalized snowflakes.

In the stormy second movement, no speed ever seemed too fast for Bax's playing. During this movement's moments of repose, the simple melody grew almost spooky in Bell's hands (reminding me it was the day before Halloween!) The final build-up started a slow and breathy portato that wound into a spectacular sprint to the end, after which the audience erupted into applause - it was really hard not to. But there were two movements remaining!

The third movement's Recitativo-Fantasia brought out more elegant playing in both musicians, flowing as if inevitable, and at times seeming like a prayer. Then the affable fourth-movement canon - which begins like a mint after dessert but then builds back to the big drama, in which Bell was pulling every last bit of sound from the fiddle. What a performance.

Also vying for top highlight of the evening was Bell's performance of Ysaÿe's "Ballade," the third of six sonatas that the composer wrote for solo violin. Again, so many notes, so many double-stops, and triple-stops, tenths, string-crossings, weird voicings...Even a well-versed reader of music might squint in confusion at the sheet music for this piece - Ysaÿe was being so inventive in his writing that he created a full page of special-instruction symbols to get across his ideas and innovations for the violinist.

You'd never know all that from Bell's playing - he took that flurry of notes and made it into a bigger whole, with plenty of revelations along the way for someone who has heard the piece many times.

Also on the program was Bach's Violin Sonata No. 4 in C minor, written for violin and harpsichord (as was everything in the days before the fortepiano was invented). I was not familiar with this piece, but I could definitely become a fan, especially of the fourth movement which was full of counterpoint and intricate rhythms that occasionally felt little jazzy with syncopation. Bell took a modern approach to the interpretation, which also fit with performing the piece on a modern piano. In recent years, because of the period performance movement, I've become more accustomed to hearing big-bellied notes, sighing phrases and tinkly harpsichord in Baroque music, so to me Bell's version sounded almost Romantic. But this was artful phrasing and beautiful playing, a reminder that Bach can be played successfully in so many different ways.

As an encore, Bell played Wieniawski's showy "Scherzo-Tarantelle," and then concluded with his own arrangement of Chopin's Nocturne in E flat major, Op. 9, No. 2, a very familiar and appealing piece that Bell recently recorded as an Amazon Original. "If you like it," Bell said, "you can go home and 'Ask Alexa!'" 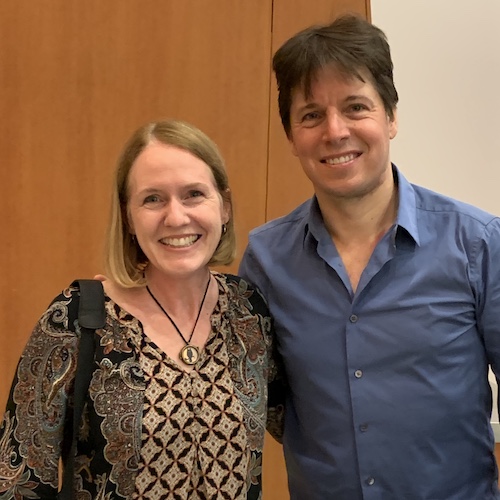 November 2, 2019 at 05:38 AM · Laurie, what is meant by a string coming “unraveled”? I had a similar experience, I’m ashamed to admit, one winter a few years ago when I hadn’t played my violin for months because of a severe injury and I hadn’t kept my instrument properly humidified. In addition to the unraveling of the string, the peg swelled so badly that neither I nor a strong, young, male student could turn it. Remember to keep your violin humidified!

Thanks for your description of Bell’s playing and your statement that Bach can be played successfully in so many ways. Bach and Bell make a very inventive, artistic pair.

November 2, 2019 at 03:22 PM · That has never happened on any of my instruments since I had gear pegs installed in them. The only downside is that it's made me a little complacent about humidification. This winter, however, both my violin and my viola will be kept in my practice room, which will have its own temperature and humidity controls independent of the house.

"Bach can be played successfully in so many different ways." Not only is that very true, but if you think about it, it's really not all that true of stuff like Sarasate. Bach is more adaptable, more versatile.

The Franck is my favorite violin sonata, I'd really love to hear Bell perform that. I think he played something else when he was here.

November 3, 2019 at 10:55 PM · We live in LA and it happened to all of our instruments too last week. Same thing with my to kids' friends from orchestra. Loose pegs, violins and cellos impossible to tune...Guess it's time to get the Dampits back to work :-)

November 6, 2019 at 01:35 AM · Laurie, Loved reading your reveiw of the performance. I was also in the house and had felt that in the Schubert (1st piece which you did not discuss) that he was overpowered by the piano. I am not familiar with the piece so I was not sure if that was Disney Hall's acoustics, intentional on Schubert's part or a mismatch of the Huberman with the Rondo, especially so as in the rest of the program Bell had the violin just singing. Do you know the piece and have any insight?

November 6, 2019 at 09:52 PM · Steve, I agree, I felt the piano was a little overpowering in the Schubert, and as a result the drama was not coming across in the same way that it did for the rest of the performance. I am not familiar with that piece, but I wondered if it was a little piano-centric in the way that it was written.