October 25, 2019, 6:10 PM · Welcome to "For the Record," Violinist.com's weekly roundup of new releases of recordings by violinists, violists, cellists and other classical musicians. We hope it helps you keep track of your favorite artists, as well as find some new ones to add to your listening! 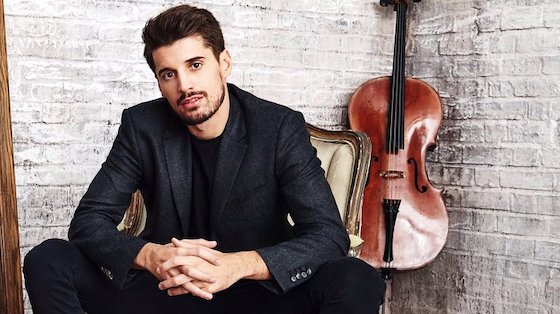 Cellist Luka Šulic, who toured the world for seven years as part of the duo 2CELLOS, features his own arrangement of Vivaldi’s The Four Seasons for a cello soloist. "I’ve loved Vivaldi’s Four Seasons since I was a child,” Šulic said. "I’ve always wanted to play the piece on the cello and love taking on new challenges. Four Seasons is a very demanding piece for violin, let alone cello, so it was a long and difficult process for me. I spent two years preparing the arrangement, little by little, piece by piece. In the end, I hope listeners will feel the same excitement I did while making this album and bringing Vivaldi’s iconic work to the cello for the first time." Šulic performs with the Archi dell’Accademia di Santa Cecilia, conducted by Luigi Piovano. BELOW: Luka Šulic plays his own arrangement (cello and strings) of "La Primavera (Spring) Op. 8 No. 1 in D major - I. Allegro" by Antonio Vivaldi.

In Russian chamber music, a special tradition evolved around the piano trio, with a number of composers turning to the genre to write "instrumental requiems." First was Tchaikovsky with his Piano Trio in A minor, Op. 50, "à la mémoire d’un grand artiste." He was followed by composers such as Rachmaninov, Arensky and Shostakovich. In the case of Tchaikovsky’s trio, the "grand artiste" was the pianist Nikolai Rubinstein, and Tchaikovsky chose the trio genre as he felt that a piece for solo piano would be too lightweight and one with orchestral accompaniment would be too showy. The work is in two movements, a Pezzo elegiaco ("elegiac piece") and a set of variations. Armenian composer and pianist Arno Babajanian (1921—83) wrote his Piano Trio in F sharp minor 70 years later. The trio is Babajanian’s best-known work, composed in the Romantic style of Rachmaninov, but also rooted in Armenian folk music, melodically as well as rhythmically. The album closes with Sudbin’s arrangement of a brief Tango by Alfred Schnittke. BELOW: Excerpt from Tchaikovsky's Piano Trio in A minor, Op. 50, with the trio placed against the backdrop of the foothills of the Rocky Mountains.

Born in Weimar, Carl Philipp Emanuel (1714-88) was the fifth child and second surviving son of J.S. Bach and his first wife Maria Barbara. By his own account he had no other teacher for composition and keyboard except his father. Nevertheless, the majority of Emanuel’s earliest works owe more to the influence of Telemann and other exponents of the new galant style, while already suggesting his own progressive instinct. At the age of 24, after seven years studying law, Emanuel decided to devote himself to music. In 1738 he accepted the position of keyboard player at the court of the Prussian crown prince – the future Frederick the Great. After nearly thirty years of royal service he left Berlin and moved to Hamburg, where he occupied the positions of Music Director and Cantor until his death. BELOW: Waley-Cohen and Bailieu perform Menuets 1 & 2 from Carl Philipp Emmanuel Bach's Violin Sonata in D Major.