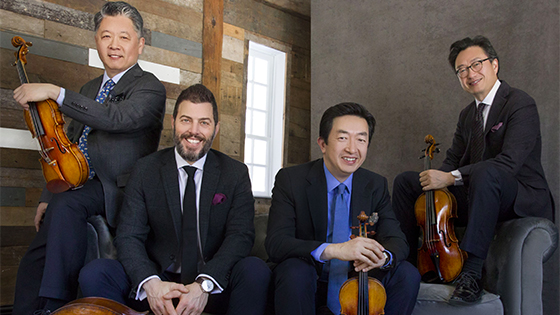 The Tianjin Juilliard Pre-College, for students ages eight through 18, welcomed its first class of students in fall 2019. The Graduate Studies program will open in the fall of 2020 as the first performing arts institution in China to offer U.S.-accredited Master of Music degree. The Tianjin campus will offer programs for a Master of Music degree from Juilliard in orchestral studies, chamber music, or collaborative piano. Applications are currently open. The campus also will offer an instrumental training program; adult education; and public performances. The school does not offer an undergraduate program.

Formed at the Shanghai Conservatory in 1983, the quartet regularly tours Europe, North America and Asia, with recent performances including the International Music Festivals of Seoul and Beijing, the Festival Pablo Casals in France and the Beethoven Festival in Poland, as well as numerous concerts in all regions of North America. Since 2002 the quartet has been Quartet-in-Residence at the John J. Cali School of Music at Montclair State University in New Jersey.

"All of us in the Quartet are extremely excited to join the resident faculty of The Tianjin Juilliard School and continue to bring chamber music to the forefront of music education in China," said cellist Tzavaras. "We look forward to working with the inaugural class of chamber music graduate students in 2020, and developing wonderful musical collaborations with our colleagues at The Tianjin Juilliard School."

Here are their brief bios:

A native of Shanghai, violinist Weigang Li began studying the violin at 5 and went on to attend the Shanghai Conservatory at age 14. In 1985, upon graduating from the Shanghai Conservatory, Li continued his studies at Northern Illinois University. He later studied and taught at The Juilliard School as teaching assistant to the Juilliard Quartet. He made his solo debut at 17 with the BBC Symphony Orchestra and has appeared as soloist with Shanghai Symphony, China Philharmonic, BBC Scottish Symphony, and Asian Youth Orchestra. Li is a founding member and first violinist of the Shanghai Quartet.

A native of Beijing, violinist Yi-Wen Jiang started his violin studies at age 6. Jiang made his concerto debut at the age of 17 with the Central Opera House Orchestra in Beijing. After winning top prize at the first China Youth Violin Competition in 1981, Jiang was accepted to study at the Central Conservatory of Music. In 1985, Jiang studied with Taras Gabora and Michael Tree in the U.S. He also worked with Arnold Steinhardt of the Guarneri Quartet at Rutgers University. As a composer, Jiang has arranged over 50 pieces for string quartet and other instruments, many pieces composed with Eastern repertoire and Western influence. Jiang joined the Shanghai Quarter in 1994.

A native of Shanghai, violist Honggang Li began violin studies with his parents at the age of 7. He co-founded the Shanghai Quartet with his brother Weigang Li while in his senior year in the Shanghai conservatory. The quartet became the first Chinese quartet to win a major international chamber music competition (1985 Portsmouth International String Quartet Competition) and came to the U.S. in 1985. He received a MM from Northern Illinois University and served as a teaching assistant at The Juilliard School in New York. In 1987, he won the special prize (a 1757 DeCable violin) given by Elisa Pegreffi of Quartetto Italiano at the First Paolo Borciani International Competition in Italy.

A native of New York City, cellist Nicholas Tzavaras began violin studies with his mother, renowned pedagogue Roberta Guaspari-Tzavaras, at age 2 and moved to the cello when he was 6 years old. He has toured the globe as a chamber musician, soloist and educator for the past two decades. Tzavaras is guest principal cellist of the Shanghai Symphony Orchestra since 2009. A graduate of the Bronx High School of Science, he went on to study at Tufts University, receiving degrees from the New England Conservatory and the State University of New York at Stony Brook before joining the Shanghai Quartet in 2000.