October 6, 2019, 11:00 PM · Violinist Joshua Bell and opera singer Larisa Martinez were married on Saturday in a ceremony at their private residence in Mount Kisco, N.Y. 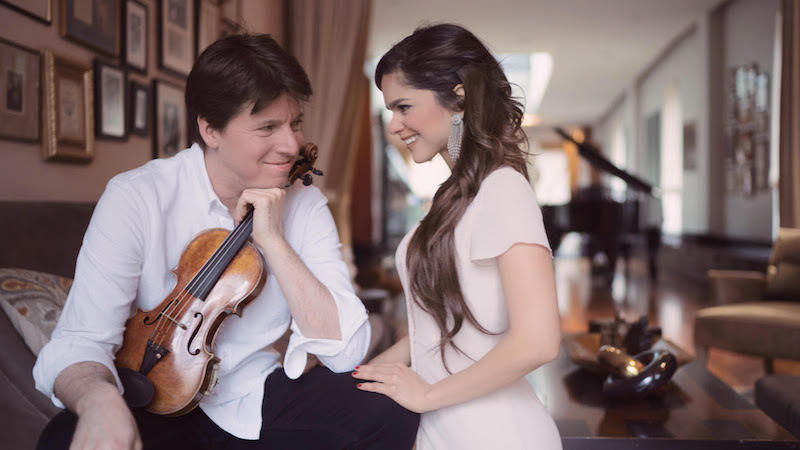 Congratulations to them both!

Martinez, 32, is an opera singer and frequent recital partner of Andrea Bocelli. She has performed at venues such as the Hollywood Bowl, Kennedy Center and Madison Square Garden and will make her Carnegie Hall debut October 10 with the Athens Philharmonic and New York Choral Society in a performance of Mahler's Symphony No. 2. Born and raised in Puerto Rico, she is the daughter of Dr. Daniel Martínez, who specializes in emergency room medicine and Luisa Torres, who is an occupational nurse. Martinez studied at the Music Conservatory of Puerto Rico while earning a bachelor’s degree in Environmental Sciences from the University of Puerto Rico. She holds a Master's degree from Mannes College the New School for Music.

Of course we know Bell, 51, as a superstar violinist, who performs as a soloist, chamber musician, recording artist and conductor -- not to mention that he was the incognito subway violinist featured in a 2007 Pulitzer Prize-winning Washington Post story, which later inspired a children's book. Since 2011 Bell has served as Music Director of the The Academy of St Martin in the Fields. Bell has made more than 40 recordings, winning numerous awards. He also serves on the board of the New York Philharmonic. Born and raised in Bloomington, Indiana, Bell is a graduate of Indiana University, where he studied with Josef Gingold. Bell is the son of the late Alan Bell, who was senior staff psychologist at the Indiana University's Kinsey Institute for Sex Research. His mother, Shirley, is a retired mental health professional.

As a couple, Bell and Martinez have advocated for classical music education and are affiliated with Turnaround Arts, All Our Kids, Education Through Music, and the Boys and Girls Club of Puerto Rico.

Many years ago, (forty),when i had invitation from Bloomington, Rostislav D. told me about Joshua: " HE is FANTASTIC BOY"!!!

And now i am Happy with NEWS!!! CONGRATULATIONS!!

THE BEST WISHES TO THEM BOTH!!!