October 3, 2019, 6:42 PM · Welcome to "For the Record," Violinist.com's weekly roundup of new releases of recordings by violinists, violists, cellists and other classical musicians. We hope it helps you keep track of your favorite artists, as well as find some new ones to add to your listening! 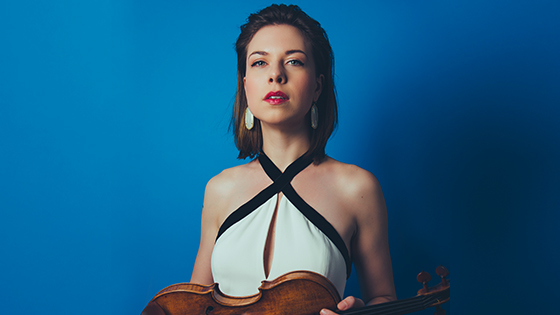 American violinist Tessa Lark has chosen a selection of some of her most cherished Fantasies and Rhapsodies for violin for her début album "Fantasy." The album includes works by Telemann, Schubert, Kreisler and Ravel, as well as Lark's own "Appalachian Fantasy" from 2016. Silver Medalist in the 2014 International Violin Competition of Indianapolis, recipient of a 2018 Borletti-Buitoni Trust Fellowship and a 2016 Avery Fisher Career Grant, and winner of the 2012 Naumburg International Violin Competition, Lark is also a highly acclaimed fiddler in the tradition of her native Kentucky. BELOW: Excerpts from "Fantasy," along with an interview with Tessa Lark:

During the mid-19th Century there was a debate as to who would in effect be the next Paganini. This album includes works by one of the major contenders - Heinrich Wilhelm Ernst - as well as Edson Scheid's own arrangement of Mozart's Rondo from Duo in G Major for violin and viola, KV 423. "This album presents some amazing virtuoso violin music by Ernst and it is the first recording ever of this repertoire on gut strings," Scheid said. "It has been an incredible journey to explore what it means to play this music on a period violin." BELOW: Paganini Caprice 5 on Baroque Violin, from Scheid's previous album.

"Her Voice" honors three distinguished women composers, including Louise Farrenc, Amy Beach and Rebecca Clarke. "There is so much great repertoire that is under-performed, especially from women composers, and we feel it is essential to program and record these masterworks alongside the more well-known catalogue of piano trio repertoire," said violinist Anna Williams. "These women really broke down barriers and paved the way for future generations and we are excited to honor their unique contributions and voices." The Neave Trio also includes cellist Mikhail Veselov and pianist Eri Nakamura. BELOW: Excerpts from "Her Voice."

"This album is an attempt to capture all of our musical influences in one cohesive body of work. In deciding what of our repertoire to record, we were looking for a solid concept that would anchor all of the musical selections," wrote Lark and Thurber. "Our minds immediately went to J.S. Bach. In particular, his Two-Part Inventions have occupied a central place in our hearts. These beautiful bite-sized works of counterpoint illuminate the full expressive possibility for two musical voices. You can hear these melodies laugh, mourn, swoon, and argue as they meticulously intertwine. In the spirit of these Inventions, we have 'invented' our own set of duos. Just as Bach's Inventions are explorations in counterpoint, our duos explore the full range of what is possible with our specific two voices: violin and bass. Both the violin and bass have played an integral role not only in European music but in all forms of American music, from Appalachia to New Orleans. In our compositions, we explore these different styles and dive into our own musical heritage - as Classical musicians, but also as Americans. BELOW: The making of Lark & Thurber's debut album "Invention."