October 3, 2019, 12:39 PM · When your performance receives vigorous applause and unanimous standing ovations with three callbacks until you play an encore, you can be pretty sure the audience enjoyed it.

On Saturday night violinist Paul Huang earned all that for his performance of Antonin Dvorák’s Violin Concerto in A minor with the Long Beach Symphony - but there was more.

In addition was the outright adoration of his colleagues in the orchestra, who stomped, applauded and waved their bows, then walked backstage shaking their heads, saying things such as, "Wow," and, "That was amazing," and, "Kill me now, these young artists are so dang good..." 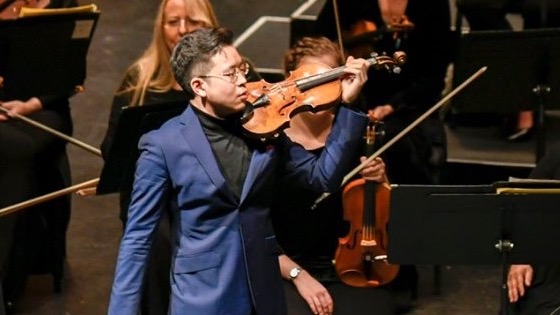 For Saturday's concert, I was actually playing in the violin section, so I witnessed his performance from the perspective of an orchestra player. But earlier in September I also saw Huang play and on that occasion I sat in the audience for a much more intimate chamber performance with Camerata Pacifica in San Marino, Calif.

For that performance, he played Lera Auerbach's 24 Preludes For Violin and Piano with pianist Gilles Vonsattel, as well as Beethoven's "Archduke" Trio, with cellist Ani Aznavoorian.

In contrast to the melodic Romanticism of the Dvorak concerto, the Auerbach Preludes were dark and dissonant, full of gesture and tricks for the violinist: double-stops, sul ponticello, endlessly sustained notes, flurries of fast notes, harmonics, sweet little melodies, noisy aggressive fast passages, a ghost-walk with no vibrato, muted glissandi, notes so high they seemed to defy pitch....

It was weird stuff, but I was mesmerized. Somewhere around the 20th prelude I wrote in my notes: "Possibly, P.H. could play any piece of any quality and make it very engaging."

That's because through all of it, he consistently played with precision, artistry and control, as well as a many-faceted vibrato and gift for timing. All of this was also true of his performance of the Dvorak Concerto - such a different piece, with its shimmering nostalgia and long musical lines.

As a participant in the Dvorák performance on Saturday, I witnessed both the rehearsals as well as the concert. Huang eased the way, in putting together a concerto that is less familiar than the "usual suspects." Huang knew what he wanted and stuck with it; conductor Eckart Preu was careful to keep the integrity of that. And he was a team player, aware of the larger picture, as well as which section of the orchestra took precedent when he didn't.

In both cases, Huang coaxed a remarkable variety of characters and colors from the 1742 Giuseppe Guarneri del Gesù that he plays, a violin once played by the great virtuoso Henryk Wieniawski. Huang has it on loan through the Stradivari Society.

This is no easy feat; del Gesù violins are notoriously difficult to play. (You can read about my 20-minute struggle with one here.) Del Gesùs tend to have deep, rich voices and strong personalities. But not all music is served by a deep, rich voice. It's a little like wearing a prom dress: it's fine if you are going to the dance but not if you are going to the grocery store. So the violinist better be able to tease out some different sounds and moods from such an instrument when the music demands it.

The good news is that, for those (such as Huang) who match well with del Gesùs, the violins tend to offer an enormous palette. What a pleasure to see all those possibilities brought to life. It's no wonder that, earlier this summer, Huang was called to fill in for Anne-Sophie Mutter at the opening performance for the Bravo! Vail Music Festival, earning a stellar review in The Strad.

So I offer you the following advice: Go see Huang perform, if he is anywhere near you. (Here's his schedule.) I found him to be a young artist very much worth seeing live - whether you wish to simply enjoy the music, find inspiration or show a student what is possible.

October 6, 2019 at 02:18 AM · Totally agree with you Laurie. Paul Huang is, in my opinion, one of the most compelling artists today. I've seen several of his performances on YouTube and am greatly impressed with his patrician elegance, uniquely personal style, impeccable technique, and exquisite musicality. I hope he makes it out to my neck of the woods in the Tampa/St. Petersburg area someday.

On a related note, I had the good fortune and honor to play the ex Wieniawski Guarnerius back in 1997 at Bein & Fushi in Chicago. It is a wonderful instrument and I'm so glad it is in the hands of a worthy violinist like Paul Huang today. Many thanks for your excellent review Laurie!