Dudamel's is the 2,654th star in a group that includes other classical luminaries such as Leonard Bernstein, Marian Anderson, Maria Callas, Arthur Rubinstein, Arturo Toscanini and Bruno Walter. The terrazzo and brass stars are embedded in the sidewalks along 15 blocks of Hollywood Boulevard and three blocks of Vine Street in Hollywood, Calif.. 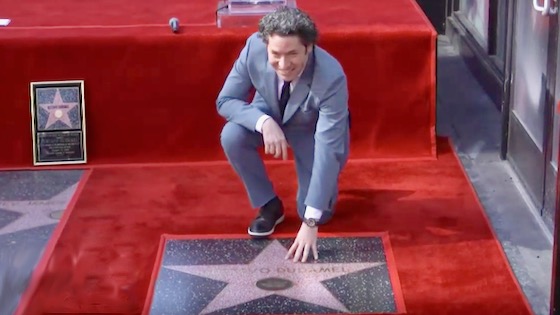 Gustavo Dudamel and his Hollywood star.
"Gustavo is a great educator, a great artist and communicator and an approachable, charismatic force that brings us all together," Williams said during the ceremony in Hollywood. "He loves every kind of music and every kind of people, and his is one of the most invaluable gifts that this city has ever received."

Dudamel's tenure with the Los Angeles Philharmonic began 10 years ago, and this year the orchestra celebrates its own centennial. "At the heart of our work is the message and the reality of inclusion: making sure that the music we present is not for the elite, but for the masses," Dudamel said during the ceremony. "It is for anyone in Los Angeles, and in the world, who loves music."

Born in 1981 in Barquisimeto, Venezuela, Dudamel grew up in El Sistema, Venezuela's musical training program created in 1975 by José Antonio Abreu with both an educational and social mission. Entering his 19th year as Music Director of Venezuela's Simón Bolívar Symphony Orchestra, Dudamel also carries on the work of his late mentor with his ongoing commitment to El Sistema, and by supporting numerous Sistema-inspired projects around the world. With the LA Phil he also continues to expand the reach of his signature Youth Orchestra Los Angeles (YOLA) initiative, including the 2019 opening of a new Frank Gehry-designed facility in Inglewood, California.

On Tuesday Dudamel concluded his speech in Spanish, saying: "We live in complex times, and these stars serve to remind us that art, beauty and inspiration are fundamental pillars in the construction of a better world."

January 23, 2019 at 03:16 PM · Dudamel is surely a brilliant maestro -- has he accomplished what Bernstein or Toscanini did? Maybe or maybe not. Surely he has accomplished as much as Helen Hunt.

January 23, 2019 at 05:38 PM · Dudamel is in his 30s and I imagine he will do more, but certainly his star already shines bright enough to stand in that company. He is an absolutely brilliant conductor, and even after 10 years the musicians who play for him express their gratitude for his genius. And he's been tireless in advocating for music education for all people, and creating institutions that will help accomplish that goal.

January 24, 2019 at 05:35 AM · There's no real "committee" for the walk of fame. You just need the right amount of support from the public, and then the approval of the organization that runs the thing. It's not like the SAG awards, which is peer-driven. Taking it for what it's worth, anytime the classical performing arts gets attention, it's a good thing.