January 18, 2019, 11:33 AM · Welcome to "For the Record," Violinist.com's weekly roundup of new releases of recordings by violinists, violists, cellists and other classical musicians. We hope it helps you keep track of your favorite artists, as well as find some new ones to add to your listening! 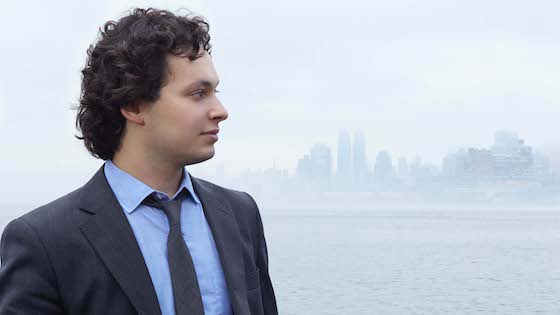 Today Russian-American violinist Yevgeny Kutik launches his latest project, "Meditations on Family," for which he commissioned eight composers to translate a personal family photo into a musical miniature for violin and ensemble. One track of the album will be released each week, starting today with "Daydreams" by Joseph Schwantner, until the full EP is released on March 8. Other pieces on the album are "Cadenza for the Once Young" by Gity Razaz (January 25); "Suitcased Dreams" by Paola Prestini (February 1); "Rima" by Kinan Azmeh (February 8); "How to Draw a Tree" by Gregory Vajda (February 15); "Litania" by Andreia Pinto-Correia (February 22); "See Above" by Timo Andres (March 1); and "Flight to Limbo" by Christopher Cerrone (March 8). This project began over the dinner table during Thanksgiving 2017, when Kutik’s grandmother, Baba Luba, recounted saying goodbye at the Minsk airport when Kutik and his parents set off for the U.S. and showed him a photo of the family, later reunited. “I asked composers I admire to choose their own family photo, a photo that conjures up memories of joy, sadness, unity, and longing, and to translate that photo into a short work for violin." Kutik describes each of those works at www.meditationsonfamily.com. BELOW: Yevgeny Kutik performs Joseph Schwantner's "Daydreams...'Reverie'" for violin, vocal quartet and glass harmonica.

Lebanese violinist and composer Layale Chaker's releases her debut album, "Inner Rhyme," composed between Beirut, Paris and London over the past two years and recorded in New York over the summer of 2018. The album explores aesthetics of Arabic classical, vernacular and free verse poetry, using a musical language at the intersections of contemporary, jazz and Arabic Maqam music. “Inner Rhyme” was awarded the Arab Fund for Arts and Culture 2018 Grant. "I spent hours listening deeply, meditating on material of different sources, and transcribing it in order to contemplate it in form of black ink on white paper. Soon, the extraordinary complexity revealed itself: counterpoint, rhythmical expansions and metric modulations, harmony patches and polyphony; all there, subtly suggested, left for imagination to discover," Chaker said. "Working on this repertoire revealed the ability of a simple melody to travel from region to region, all the way from the banks of the Euphrates to Mount Sinai. From the cradle to the grave, in nuptial festivals as in funerals, the very same rhythms and melodies trace and mark every stage of life for Assyrians, Syriacs, Kurds, Arabs and Gypsies. What could possibly transcend geopolitical deals and whirlwinds more than that thought?" BELOW: Excerpts from violinist Layale Chaker's, "Mkhammas," played live at Morgenland Festival Osnabruck, 2017 (violin solo is at 5:42):

Violinist Jennifer Pike explores her heritage through Polish music for the violin. This album features works by Mieczyslaw Karlowicz, Karol Szymanowski, Henryk Wieniawski, and Mieczyslaw Moszkowski, with pianist Petr Limonov, winner of the Nikolai Rubinstein International Piano Competition. BELOW: Jennifer Pike and pianist Petr Limonov perform one of the works that is on the album: "Impromptu" by Mieczyslaw Karlowicz.

Cellist Gautier Capuçon performs works by Schumann, including the Cello Concerto in a 2015 live performance with the Chamber Orchestra of Europe conducted by Bernard Haitink, at Amsterdam’s Concertgebouw. "The concerto displays all the different characters, atmospheres and tensions that can be found in Schumann’s music,” Capuçon said. "It is meditative and passionate and its finale is dazzlingly brilliant. In the slow movement there is a very gentle and romantic duet between two cellos – the soloist and a solo player from the orchestral section ... It is easy to imagine that they represent Robert and his wife Clara." BELOW: Excerpt from a performance by Gautier Capuçon of Schumann Cello Concerto Op. 129 with Bernard Haitink and the Chamber Orchestra of Europe:

January 18, 2019 at 07:34 PM · That Jennifer Pike album is going to be a whirlwind. I've never known a Polish composer to write timid stuff!