"It was an absolutely crazy discovery for me," said violinist Philippe Quint, who on Friday released Chaplin's Smile, a collection of 13 new arrangements of songs from Chaplin's films and his debut recording with Warner Classics, with pianist Marta Aznavoorian and a guest appearance by Joshua Bell.

The project -- three years in the making -- was a tremendous source of inspiration for Quint.

It all started when Quint was fishing around for what music to record next. He'd been recording an album every year until 2016; when he took a break to figure out what to record next. Some of his previous recordings included: the Kabalevsky, Khachaturian & Glazunov Concertos; the Tchaikovsky Concerto; Bruch and Mendelssohn; Opera Breve; Paganini works. At this point, he was ready for something different. 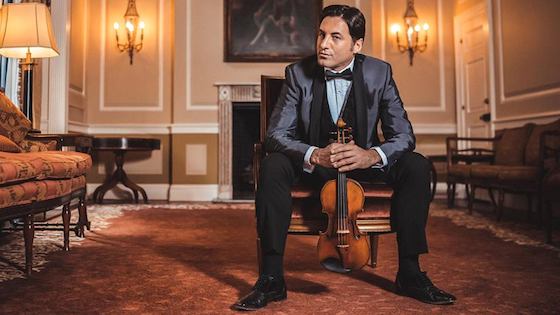 "I've recorded most of the major concertos; I've recorded standard repertoire, and I was thinking to myself, what else is out there that hasn't been done? With classical repertoire, any great repertoire, it's a little bit like looking for a needle in a haystack," Quint said. "Discovering the fact that Chaplin was a prolific composer with an enormous body of work and a lot of beautiful songs and tunes -- this was finding that needle in the most visible place possible. We're talking about the most iconic, legendary human being in the last century! He was the most well-known man during his lifetime and many years after his death, and he's still one of the most celebrated comedians, actors, directors. The fact that he was a composer somehow escaped everyone!"

Well maybe not everyone -- some of Chaplin's music has remained in the air. In particular, the song "Smile" made it into the popular vernacular in the mid 20th century and remains there today. So many artists of different eras and genres have created versions of "Smile" - Tony Bennett, Michael Jackson, Placido Domingo, and Anne Akiko Meyers on violin. But many don't realize the music was written by Charlie Chaplin. The music first appeared in purely instrumental form at the conclusion of Chaplin's 1936 movie "Modern Times," then in 1954 was turned into a song with lyrics, made famous by Nat King Cole.

"Growing up in the Soviet Union in the 1980s meant we had very little access to performers outside of the former USSR. However, Charlie Chaplin was an exception," Quint said. "Upon my arrival to the US in 1991, I finally was able to acquire Charlie’s films on VHS. I watched them hundreds of times, every time noticing something new – his comedy was brilliant and touching."

"A few years ago, while looking for a new project, I stumbled upon Chaplin’s Smile," he said. "It was a violin-piano arrangement," he said. "I listened to it and thought, 'This would be a great addition to my future album of film music...'"

Then he realized that, if he were to play it, he would want to make his own arrangement of the song. The only problem was that he hadn't ventured much into the world of arranging.

"I've composed music here and there, but doing an actual arrangement; that's a whole different story," Quint said. He was inspired for the challenge, though, and "so I started working on 'Smile.'"

Quint kept listening to different versions of "Smile" on YouTube, and "it's because of YouTube's automatic function, when one video goes straight to another video, that I was thrown to Limelight, another Chaplin film. I heard this glorious melody that was played by oboe, and I thought to myself, wait a minute, this would also sound really great on violin! Then I thought, 'This needs to be another arrangement...'"

Before he knew it, he was arranging two songs by Chaplin, "and then I thought to myself, 'What else is out there?' and I started digging."

He found more than he had imagined: Chaplin composed numerous scores for his own films. Chaplin had made his name in silent films, which typically were accompanied by a live pianist or theater organist. For those, Chaplin would choose the music to be played live during the showing of his films. When recorded sound became an option, Chaplin first resisted the idea of recorded dialogue but embraced the opportunity to create a musical soundtrack that he could completely control. When it came to composing those soundtracks, there was just one problem: he didn't read music. So he would go to a recording studio, where a team of musicians or a professional composer would help make his ideas come to life. Chaplin was an amateur violinist, cellist and pianist who apparently practiced long hours as a teenager. (An interesting note: Chaplin played the violin strung in reverse, on his right shoulder, because he felt his right hand was stronger for fingering.) Chaplin would convey his ideas by playing them, humming them, or pointing to the style of a known composer for what he wanted in a certain scene.

For Quint, this was a rich discovery - so much music! But there was just one problem: beyond "Smile," there were not any violin arrangements of this music.

"This is when I started hibernating for three years -- in my apartment, with help from two arrangers and my wonderful pianist Marta Aznavoorian -- the four of us have been working tirelessly for three years, trying to make something out of those beautiful tunes that Chaplin wrote." Those other arrangers included Charles Coleman and Leon Gurvitch. "We were all working on everything all the time. Sometimes it meant adjusting one note at a time, sometimes changing a chord, playing around with timing. I can't tell you how challenging all of this was."

"The violin parts were written almost entirely by me," Quint said. "I wanted to make it sound more virtuosic, sort of modeling after the Heifetz arrangements of Gershwin, and also paying homage to Fritz Kreisler and the bon-bons that he wrote. I felt that Chaplin's melodies had the same kind of charm, sort of a Mozartean grace and Kreislerian charm, that's the best way I could describe it. I wanted to preserve that."

"The biggest challenge was to keep the simplicity of the melodies. I didn't want to make Paganini Caprices out of them -- that wasn't the point," Quint said. "I wanted the Chaplin melodies to remain as close to the original as possible, yet make it sound more challenging for violin."

He expanded the structures of most of the songs: adding middle sections, playing around with themes and putting the music in various keys. "So there was a major composing effort on my part, and this was a whole new territory for me. It was challenging, but great fun." Quint did 11 arrangement this way, then found that he needed just a few more to create a complete, hour-long album.

That is when they added an arrangement by Gurvich called "The Kid Fantasy," using the best themes and songs of the movie, The Kid. "This was Chaplin's very first feature films in 1921, and considered to be one of the greatest films of that era," Quint said. "That's probably the longest piece on the CD. Then we also added a song that did not make it into 'City Lights,' called 'Beautiful Wonderful Eyes,' which is a tango."

In all, there are 13 arrangements, and "my dream is that one day these arrangements will make it into the violin repertoire, so that people can play these as encores or as part of their recitals. But that is a long-term goal." In the mean time he plans to perform them frequently, "then after I do that, I'm sure that I will make little tweaks and adjustments, then hopefully I'll be able to think about publishing them."

For two of the tracks on the album, Quint has a special guest: Joshua Bell.

"Josh has been a great friend of mine for about 10 years," Quint said. "We met at the Grammy's in 2002, then we crossed paths several times here and there and became very good friends." The two have performed together - counting each other among "friends" for concerts called "Joshua Bell and Friends" and then "Philippe Quint and Friends."

"We've also been competing regarding to whom the Red Violin Caprices really 'belong' to!" Quint said, laughing. Bell recorded the soundtrack to the movie The Red Violin in 1999, and in 2007, Bell made a recording of The Red Violin Concerto and Violin Sonata. However, in 2008, Quint was the first to record the Red Violin Caprices after John Corigliano developed them in to virtuoso violin works. "So we have this running joke: who do they really belong to? But joking aside, he's been extremely generous and supportive of this project," Quint said.

"Josh has an incredible sense of commitment when he does something," Quint said. "He's very intense, very passionate about what he does, and very serious. So he adds a lot; he immediately had a lot of ideas about how the phrase should flow, how the arrangement could be adjusted here and there."

For the album, "Smile" is a duet between Bell and Quint, and they also played a song called "Mandolin Serenade," which does not have an actual mandolin; "I actually figured out a way to pizz very fast with the index finger of my right hand, so it sounded like a mandolin," Quint said.

For Quint the process of uncovering and then working with Chaplin's musical output has been greatly rewarding.

"We're talking about one of the greatest geniuses of the last century," Quint said, "and so just coming up with this project, for me, was one of the most miraculous journeys of my musical life."

This month Quint, along with pianist Aznavoorian, will perform music from the album in a multimedia recital tour with concerts in Los Angeles, Chicago, New York, Washington DC, London, and Berlin. The recitals will also focus on Chaplin’s encounters with some of the greatest classical composers of his time, including Stravinsky, Rachmaninoff, Debussy, and Schoenberg, with narrations of those meetings from Chaplin’s My Autobiography. They will also include photos and clips from Chaplin's most famous films, including City Lights, The Great Dictator, The Kid, Limelight and Modern Times. Opening for Quint in New York, Los Angeles, and London is Chaplin’s granddaughter Kiera Chaplin. Here is Quint's concert schedule.

January 17, 2019 at 03:33 AM · Charlie Chaplin was so talented, and the Philippe Quint et.al. compilation sounds wonderful!