September 30, 2018, 10:14 PM · What an event! Not only was violinist Hilary Hahn playing the Bach Double and Bach Concerto in E major with the Los Angeles Chamber Orchestra on Saturday, but, surprise! She was signing copies of her hot-off-the-presses new solo Bach CD, which is not even officially released until Oct. 5. It's the CD that many of us have been waiting on for more than 20 years, the CD that completes her recordings of the Bach Sonatas and Partitas for solo violin, the latter three which she recorded back in 1997. 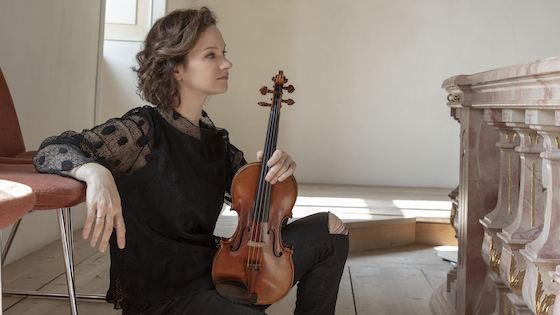 Here is our interview with Hilary about the solo Bach.

On Saturday evening, the Alex Theatre in Glendale, Calif. was packed with fans both young and old, and a whole lot of them were violinists.

Allow me to explain: many violinists are at least as obsessed with Bach as they are with Hilary Hahn, and especially with the "Bach Double," J.S. Bach's Concerto in D minor for Two Violins, which Hahn was playing with LACO concertmaster Margaret Batjer. (As she did for her recording of this piece with LACO, made some 15 years ago!)

If you need proof: Just last Sunday I attended a "Bach Double Party," in which 14 students, three teachers (including myself) and two pianists gathered in a large living room to play the first movement of the Bach Double, which these students had learned at the end of Suzuki Books 4 and 5. I was not a Suzuki student myself, but learning the first movement of this piece was one of my biggest goals as a youngster; I can still remember trying to pick it out by ear and get other students to teach it to me, before my teacher assigned it to me. At the Bach Double party, the youngest violinist in the room was six years old, and she could play both the first and second violin parts by memory, as could the teachers and many other students in the room. First we played through the movement slowly; then we played it again at about double speed. After that, we tried rotating around the room while playing it. We didn't get to the game where someone claps and those who know both parts switch parts -- now that is a fun challenge!

When a violinist of high stature such as Hilary Hahn comes to town and performs the Bach Double -- this creates an entirely different kind of Bach Double party. In Saturday's audience I chatted with elementary-age violin students, high school violin students, parents, one of my former violin students who graduated 10 years ago, violin teachers and professional players from all over Los Angeles, amateur violinists, and of course patrons and music lovers who regularly attend these concerts.

It's a special feeling to watch a famous violinist perform a piece so close to the heart -- and hands -- for so many people. And I'm always a little thrilled when a young student has the revelation, "What, there are three movements to the Bach Double?!" Yes!

On to the next question: how would Hilary Hahn play Bach? After that initial introduction to Bach, one learns that there is much more to it than slow or fast or remembering all the notes. Bach is a lifetime practice -- legendary cellist Pablo Casals famously said in his 90s that he continued to practice Bach daily because "I think I'm getting better."

It's music with great depth, and beyond that, it can be played in so very many different ways. Of late, many have adopted a light-and-airy approach to Bach, based on the study of Baroque-era period-performance, often electing to use a Baroque bow and/or gut strings when playing the music of Bach, to use open strings more and to use vibrato less. That approach can work well, and the study of period performance can be very inspiring to many artists. But it decidedly is not Hahn's approach.

Hahn mines the music of Bach for maximum effect with a post-Baroque sensibility and with modern equipment: a 1865 Strad model Vuillaume violin and a modern Tubbs bow. It is a tone-producing style -- even rather muscular at times. Her Bach has kick to it, rhythmic awareness, plenty of vibrato, and even the occasional glissando.

I'm not the Bach police -- I don't believe in the idea that there is any one way to play Bach "correctly." (I might add, nor do most period musicians that I know -- their historical search tends to be to find inspiration to create their own "right way.") I love any approach performed well, with conviction, vision and forethought. Hahn's Bach is all of that.

I wasn't entirely sure if Hahn and Batjer started out on the same page in their approach, but they seemed to tune into each other more and more as the Bach Double unfolded, producing good duet energy. They really hit their stride in the third movement -- a speedy ride through tricky terrain which was downright exciting to watch and hear.

During the Concerto in E major, Hahn was accompanied by a reduced LACO, about 14 members, with guest conductor Gemma New. The melodious second movement was a highlight, with moments of silence and tender playing.

The encore was a real delight, the "Gigue" from Bach's third solo partita in E major. This joyful and buoyant dance in 6/8 showed both Hahn's ability to illuminate very subtle details within this music and to play with spontaneity.

For me, hearing Hahn's performance of works by Bach awakened a yearning that I didn't know I had -- to hear Bach played beautifully, thoughtfully, unapologetically, with a modern set-up and mindset. Somehow, 300 years after Bach wrote these works, there is still much to hear anew in them. 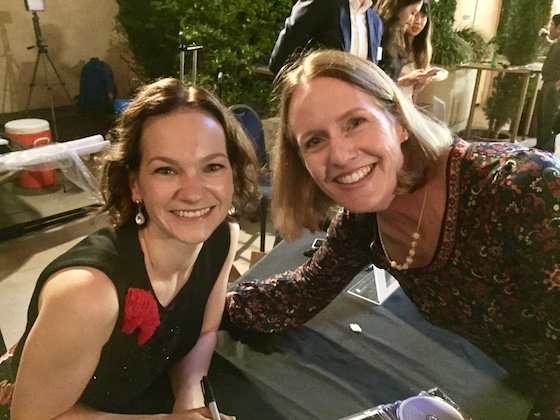 October 2, 2018 at 01:57 AM · She's so wonderful, definitely one of my favorite violinists of all time. I really hope to see/listen to her live soon.

October 2, 2018 at 06:03 AM · It was a wonderful concert to attend! Also because I had not read the handouts closely, I thought she was signing copies of the recently rereleased Bach concertos album with LACO. I saw later that it was infact the NEW Bach solos. Drat! Oh well, ordered through Amazon.

October 3, 2018 at 05:59 PM · Hi Steve, Oh that would be disappointing! I was also surprised that those not-yet-released solo Bach CDs were the ones being sold, since the release date is Friday!