September 27, 2018, 1:08 PM · Welcome to "For the Record," Violinist.com's weekly roundup of new releases of recordings by violinists, violists, cellists and other classical musicians. We hope it helps you keep track of your favorite artists, as well as find some new ones to add to your listening! 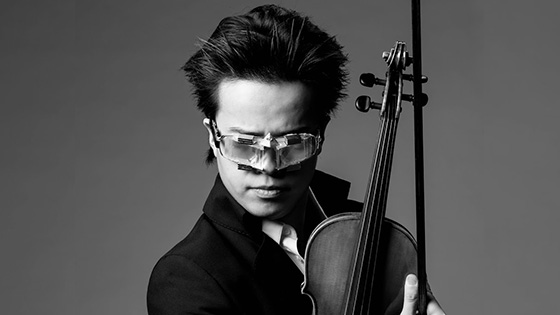 Roman Kim, whose version of Bach's "Air on a G String" made the rounds on Youtube in 2011 and was subsequently published by Bärenreiter, has just released his debut album of works by Paganini, Bach, Alexey Shor, and also several pieces written by himself, including three "Romances" and "Introduction, Theme & Variations on Dal tuo stellato soglio from Rossini's Mose in Egitto, Op. 3, 'I Brindisi'" (Dedicated to Niccolò Paganini). Beyond his violinistic feats and composition, Kim is known for the unusual prismatic glasses he wears to help him focus on the music. BELOW: Not on the album, but this gives you an idea of Kim's creativity and mad abilities: Here he plays Eine kleine Nachtmusik - a quartet - but he plays all the parts himself!

This album is devoted to the complete music for violin and orchestra by Arvo Pärt and includes Tabula Rasa, Fratres, Passacaglia, Darf ich, and Spiegel im Spiegel. Pärt's music for violin stem from the composer's study of medieval church music and are products of what Pärt describes as a 'tintinnabuli' style, developed by the composer in the 1970s. Pärt said of the style, "I have discovered that it is enough when a single note is beautifully played. This one note, or a silent beat, or a moment of silence, comforts me. I work with very few elements - with one voice, two voices. I build with primitive materials - with the triad, with one specific tonality. The three notes of a triad are like bells and that is why I call it tintinnabulation." This album was recorded in the presence of the composer.

For its third ECM release, the Danish String Quartet inaugurates a series of five albums with the overarching title of "Prism," in which the group will present one of Beethoven’s late string quartets in the context of a related fugue by J.S. Bach as well as a linked masterwork from the quartet literature. With Prism 1, it’s the first of Beethoven’s late quartets, op. 127 in E-flat Major, alongside Bach’s fugue in the same key (arranged by Mozart) and Dmitri Shostakovich’s final string quartet, the No. 15 in E-flat minor. BELOW: The DSQ plays "Elegie. Adagio" from Shostakovich Quartet No. 15.

Lucia Micarelli is a classically-trained violinist who has worked with pop artists such as Josh Groban, Chris Botti and Barbra Streisand and has released two solo albums, "Music From A Farther Room" and "Interlude." This album features a live performance with her band, with a range of music including classical, jazz, American and traditional fiddle music.