September 26, 2018, 1:28 PM · It's going to be a trip down memory lane this weekend for violinists Hilary Hahn, Margaret Batjer and the Los Angeles Chamber Orchestra as they perform repertoire from an album of Bach Concertos that they recorded together, 15 years ago. 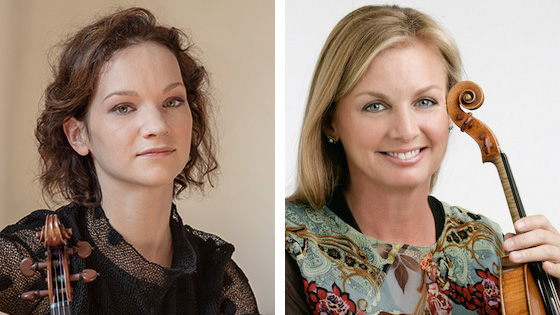 The concerts will take place Saturday and Sunday (click here for tickets and details) in Glendale and Los Angeles, with Hahn and Batjer performing Bach's Concerto for Two Violins, as they did on the album, and Hahn performing Bach's Violin Concerto in E Major. The Los Angeles Chamber Orchestra will be conducted by Gemma New, and other works on the program include Mendelssohn's Symphony No. 4, "Italian"; Andrew Norman's "Try"; and the U.S. premiere of Franco Donatoni's "Eco."

The Bach album was actually Hahn's very first recording in 2003 for Deutsche Grammophon, and it was re-released earlier this summer on vinyl. The album was praised by Classics Today for "the chamber-like interplay that produces a more ‘authentic’ impression than many performances using period instruments."

By now, Hilary Hahn has released 16 more albums on the Deutsche Grammophon and Sony labels, in addition to three DVDs, an Oscar-nominated movie soundtrack, an award-winning recording for children and various compilations. She's become very active on Instagram where lately you can find clips of her daily practice sessions as well as photos. As part of recent residencies at the Vienna Konzerthaus, Seattle Symphony, Philadelphia Orchestra and National Orchestra of Lyon, Hahn piloted free – and sometimes surprise – concerts for parents with their babies, as well as a knitting circle, a community dance workshop, a yoga class and art students. On Oct. 5 Hahn will release a recording of Bach's Partita No. 1 and Sonatas 1 and 2, completing the set that she started in 1997, when she recorded Sonata No. 3 and Partitas 2 and 3 for Sony. Check a week from Friday for our interview with Hilary Hahn about the solo Bach.

Margaret Batjer has been concertmaster of Los Angeles Chamber Orchestra since 1998 and developed LACO’s chamber music series In Focus. She is active in promoting the work of modern composers and last spring she performed the west coast premiere of Pierre Jalbert's Violin Concerto.

(Click here for information and tickets for this weekend's concerts.)