September 16, 2018, 2:46 PM · INDIANAPOLIS - Excitement was in the air on Saturday night at the Hilbert Circle Theatre downtown, where the last three of six Finalists in the International Violin Competition of Indianapolis would perform their Romantic and Post-Romantic Concertos in a concert that took place right before the judges were to announce the winners of the 17-day quadrennial competition. (Find that announcement and the final placement of the laureates here.)

Before the concert began, I chatted with a couple sitting next to me in the balcony, who had traveled from Los Angeles to attend the concerts. They were carefully scoring every violinist for every performance, and the margins in their programs were filled with handwritten notes and numbers. Another couple, behind me, had traveled from Fort Worth for some of the concerts and said that next time, they hoped to simply come for the entire competition. It would seem that "The Indianapolis" has become something of a pilgrimage for violin lovers in North America!

On Saturday audience members were treated to a second night of varied repertoire, with Shannon Lee playing the Walton Concerto for Violin; Luke Hsu the Tchaikovsky Violin Concerto and Anna Lee the Mendelssohn Violin Concerto, all with the Indianapolis Symphony Orchestra, conducted by Leonard Slatkin. The other finalists, Richard Lin; Risa Hokamura and Ioana Cristina Goicea, had performed on Friday, read the review and find the videos here. 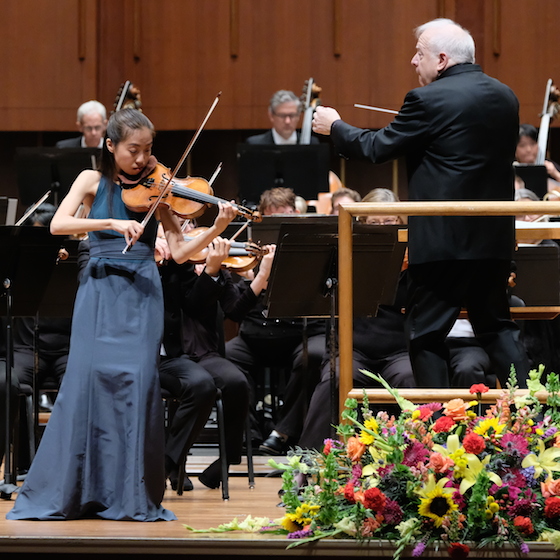 While William Walton's Viola Concerto has become a staple of the repertoire for that instrument, the Violin Concerto, written in the late 1930s for Jascha Heifetz, has not caught on in quite the same way. One explanation is the fact that we violinists already enjoy an embarrassment of riches in our concerto repertoire; another is simply its technical difficulty. Nonetheless it is a work of depth and melodic appeal, and to hear it played live by a thoughtful and accomplished young artist such as Shannon Lee, 26, of the U.S./Canada, is a real treat.

From opening melody, Shannon played with a rich and vigorous tone, making a bold statement of this music. Walton has the violinist shifting all over the fingerboard for his moody melodies, which leap high and dive low, and Shannon landed those leaps with impressive consistency (a few misses, with this many, did not trouble me). In the furious second movement she made fast runs flow musically, and a passage of artificial harmonics was especially well-executed. Her very rapid passagework was also very accurate. The third movement featured some nicely controlled double stops and melodies that sang expressively -- even wailed at times. There were quiet moments that were quite arresting. It was an impressive performance of this difficult concerto, very deserving of the three ovations she received from the audience. 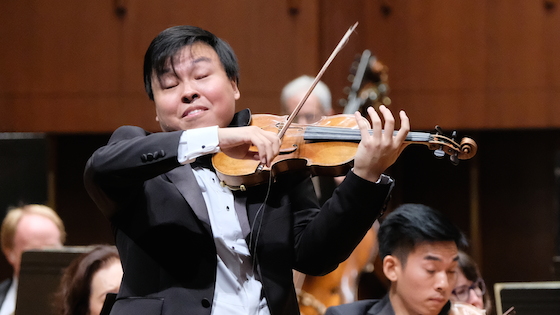 Next came Luke Hsu, 28, of the U.S., performing the Tchaikovsky Violin Concerto, which in contrast to the rarely-played Walton, is one of the most-performed and best-loved concerti in the violin repertoire. This concerto was a good choice for Hsu, fitting both his playing and his stage personality well.

I was enjoying his beautifully pure and well-played introduction -- when a cell phone went off in the audience, and it seemed to keep going forever! Luke did not seem fazed, if he noticed it at all. This was a solid performance, and also one in which he created the time and space to help us enjoy the expressive details. During the cadenza his quiet playing produced an attentive silence in the audience, and I found myself simply enjoying the music. Things did seem to spin close to out-of-control-fast toward the end of the (infernally long) first movement - the orchestra really took off and there were a few dropped notes. Nonetheless Luke mashed the throttle, powered through Turn 4 and didn't look back on his way to the checkered flag. (We needed an IndyCar metaphor, don't you think?)

During the second movement Luke chose not to use a mute; Tchaikovsky does request it, though it can sometimes make things a bit too quiet, depending on the hall. Luke played with complete commitment, though at times the pitch felt a bit sharp from the orchestra's pitch. There was some gorgeous melody-making during the slower parts of the third movement, and the way he revved into fast from slow was especially effective. There was a moment of misalignment between orchestra and soloist toward the very end of the piece -- not sure what happened there! Overall Luke gave an energetic and satisfying performance. 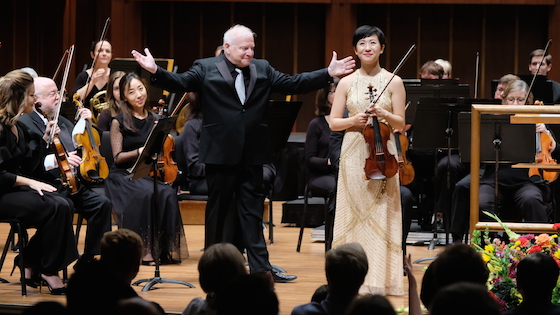 When it comes to Romantic concertos, the Mendelssohn Violin Concerto, written in 1844 leans toward the "Classical" period, and as such it leaves little room for error, rather like Mozart. It also tends to be one of the first "real concertos" that a violinist studies, thus anyone who is a violinist, amateur or professional, tends to know this piece inside and out.

Lee powered through the opening with a clean and clear sound, always an energetic presence on stage. When it came to the first-movement cadenza, she did not revel in the rolling bariolage, instead moving through it quickly. The second-movement melodies were fairly straightforward, moving through the long double-stop passages in a measured way. She seemed most in her element for the third movement, during which she played very fast, channelling the mirth and light-heartedness of this music, even smiling much of the time.

Following this last concert in the Finals, jurors announced the winners in the competition. Click here to read how the laureates were placed.