September 15, 2018, 2:39 AM · INDIANAPOLIS - Three very different major concertos were featured on the second-to-last night of Finals in the International Violin Competition of Indianapolis, which took place at the Hilbert Circle Theatre Friday.

If this variety of repertoire creates a interesting listening experience for the audience, it doesn't necessarily make the judging any easier. After all, this is a competition! When every violinist plays the exact same piece, the differences tend to stand out. With different pieces, one must make comparisons based on wholly different techniques and expressive possibilities that are inherent in each piece. And one must separate feelings about the piece from feelings about how someone played it.

The good news for me is that I love all of those pieces. How could any violinist not? But in such different ways!

First on the program was Richard Lin, 27, of of the U.S./Taiwan, who played Max Bruch's "Scottish Fantasy" for Violin and Orchestra, Op. 46, a four-movement piece based on Scottish folk songs. Here is a piece that revels in its own Romanticism, painting its sentimental picture with full orchestra and with the harp front and center (literally, tonight the harp sat in front of the violin section, right behind Lin!) 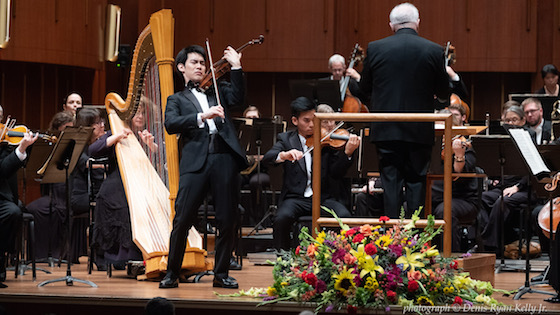 The opening melody immediately revealed Lin's pure sound, which continued to carry well and penetrate the orchestra's sound throughout the piece, including those moments when orchestration was quite full. Lin's playing was bold and assertive, and his pacing felt organic and inevitable. In the second movement, Lin was on top of the changeable moods and tempi.

If I had to choose just one word to describe Lin's playing it might be "clarity" - clarity of sound production, clarity of musical intention, clarity about the larger picture. When playing accompanying figures he finds that balance between being the soloist yet clearly supporting a melody in the orchestra. This is the kind of piece where the soloist really does set the pace, and his sense of pacing feels organic and inevitable.

The chords that opened the final movement were tidy and strong, without being overplayed. At one point during things seemed to go just slightly awry in this movement full of fast runs, double stops and I wondered if his fiddle had slipped out of tune. The simple statement right before the end of the piece was quite riveting. 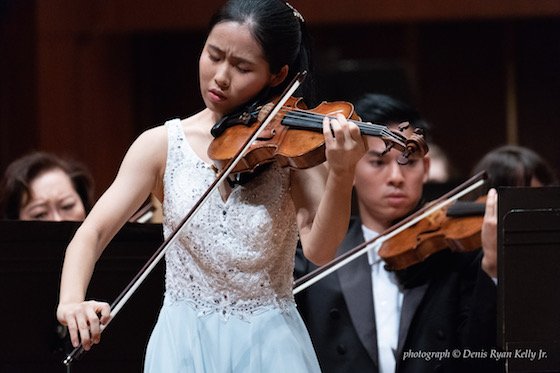 Whenever someone plays the Tchaikovsky Violin Concerto with the kind of ease that Risa Hokamura, 17, of Japan did on Friday, I have to remind myself that this warhorse of our repertoire was pronounced "unplayable" upon its arrival in the world. (What would Leopold Auer say now, if he were in the audience?)

The first movement of the Tchaikovsky is one of the longest first movements in the repertoire, and on Friday the ease didn't come right away for Hokamura. At first she seemed almost to be looking for her voice, wrestling a bit with the fiddle.

During the first movement, the violinist presents what feels like an entire concerto, then a cadenza, and that first part all again, in changed form. It was during the cadenza in the middle that Hokamura started to hit her stride -- she played the cadenza exceptionally well, with a natural sense of rubato. She pulled the tempo around in ways that I had not heard before, but she'd mastered it well and it worked.

For the second movement Hokamura used a mute, as requested by Tchaikovsky in the score. Of course a mute quiets the violin, and this detachable one did a very effective job, even changing the color of the instrument somewhat. On one hand it gave the music an intimate feeling, but on the other, the muted sections were just a little too quiet, at least from the balcony!

Starting the third movement, Hokamura dispensed with the usual drawing-out of the opening figure, and she set a tempo for the movement that was fast but reasonably so. She made good use of dynamics to vary the repeating figures and seemed very comfortable with all of these fast notes. Overall it was a solid performance. 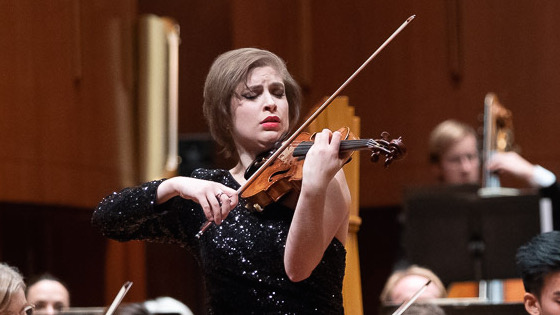 Shostakovich's heart-heavy Concerto No. 1 in A minor came next, featuring Ioana Cristina Goicea, 25, of Romania. This music does not begin with a flourish; it begins by dumping the violinist onto a haunted landscape to find its way alone. It is not atonal, yet it refuses to resolve or to go anywhere harmonically comfortable, and the violinist's notes lead the way, looking and looking. During this opening Goicea needed little more precision and solidity of finger placement to make those unexpected notes convincing. As the movement progressed Goicea warmed up and played with more accuracy and created a nice build up of energy, which is later released back into the gloom. By the end of the first movement she was channeling more of the beautiful pain of this music.

The second-movement is full of frenetic energy, and Goicea had these notes well in hand. I loved the orchestra's crazy-dance-with-tambourine outburst - there was some great playing going on in the orchestra throughout this piece and throughout the evening. Though she made an impressive display of getting these many and difficult notes, the orchestra needed a bit more time in between those notes to create its sarcastic effect. As such, the dark humor went missing in this "Scherzo" (a word that means "joke").

A "Passacaglia" is a form of music in three that is built over a bassline; in the case of the third movement of the Shostakovich Concerto it is built over an elephant walking (or at least its plodding figures bring that image to my mind). The opening is a great moment for the brass section; then the violinist must walk with the elephant, who is at times far away but then at other times grows scarily close, always walking steadily and predictably. Goicea needed to mind the elephant; the tremendous drama with which she was playing would have been all the more exciting, had it been in perfect step with the orchestra.

The highlight of Goicea's performance was the cadenza that grows out of the Passacaglia -- this is one of the great moments in violin literature and also one of the reasons people decide to play this piece, just to rock out on this cadenza. Goicea did, for sure. When the cadenza arrived, the volume of her violin bloomed and rang, her harmonics were accurate, her pacing was perfect. It was completely in tune, with the right dynamics. She created wonderful drama in the contrast between quite low pedaling notes and big outbursts, holding her own and creating a great deal of excitement, playing solo.

Her last movement was energetic, with more coordination with the orchestra than she had shown in the other movements.

The finals in the Indianapolis competition will conclude on Saturday, after which the placement of laureates will be announced. We will post the live-feed Saturday tomorrow on Violinist.com, and you can also find the live feed on the Indy Competition page as well as the archived videos.

September 15, 2018 at 06:01 PM · While a passacaglia is often in triple time, it is not a requirement of the form. Two familiar examples which are not: the finale of the Brahms St. Antoni variations, op. 56, and the Handel-Halvorsen Passacaglia.