September 14, 2018, 2:19 AM · INDIANAPOLIS - As a violinist playing a Mozart concerto with a conductor-less orchestra, one strategy for leading the group is to play along with the orchestra during their introduction, before it's time to enter as the soloist.

It's not necessary, but playing the "tutti" can help set the tempo, cure the awkward waiting time and also serve as a little warm-up.

This was one consideration for the six Finalists in the International Violin Competition of Indianapolis during Wednesday and Thursday's Classical Finals, when each was required to perform a full Mozart violin concerto, leading the East Coast Chamber Orchestra (ECCO) without a conductor. Each violinist also performed an encore piece by Fritz Kreisler, orchestrated by 1994 IVCI Laureate Jaakko Kuusisto.

While none of the three violinists who performed on Wednesday night chose to play the "tuttis," all the violinists on Thursday night chose to do so. In addition, Thursday's violinists -- Shannon Lee of the U.S./Canada; Luke Hsu and Anne Lee, both of the United States -- all wrote their own cadenzas, at least in part, for their Mozart performances. 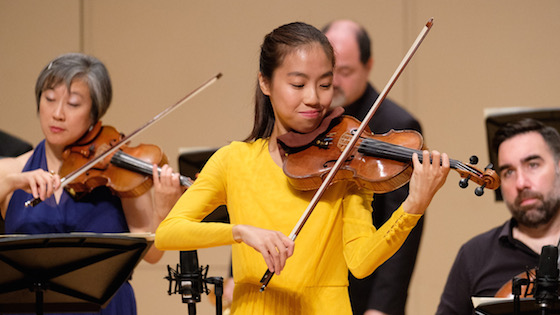 I have to confess that in the beginning, violinist Shannon Lee had me fooled, with her unassuming stage presence. Shannon, who is 26, studied at Columbia University and at the Curtis Institute and her past teachers include David Nadien, Arnold Steinhardt and Ida Kavafian. More than a decade ago she recorded an album of showpieces; and this fall she will begin studies at the Cleveland Institute.

Playing along with the "tutti" orchestra part, Shannon seemed to exhibit a shy personality, remaining in what I'd call "orchestra mode": playing along and fitting in.

But when she entered as the soloist, she was suddenly transformed, with utterly strong and assertive playing. This one, I realized, is not to be underestimated.

Everything coming from her violin seemed to contradict her stage persona, and I thought, wouldn't it be nice to get them to align? But in the end, that stopped mattering to me.

Shannon produced a sound that I would describe as "live," with a core to it and an energy within it. In her first-movement cadenza, which she composed, she used the first chord of the piece as a point of departure, going on to double stops and ending with a nice double-stop trill. In the second movement that sound was on display again - the opening melody had a certain kind of pull to it. In the development she built suspense, keeping the line going for a long time, drawing it out, never letting it go, and this was all very coordinated with the orchestra. For her second movement she used the Franko cadenza, giving it good direction in the double-stop accompaniment to the melody. The musicians of ECCO were very attentive throughout, and her last solo statement in this movement was downright poignant.

The third movement had that bubbly Mozart feel to it, clean passagework, and even more interaction on Shannon's part with the orchestra. She brought out the change in musical character in the many contrasting sections of this movement, and the brief cadenzas she played were her own variations on the Franko cadenzas.

Her performance of "La Gitana" brought out more of the strong character than the sultry character in the piece, yet she also played with tenderness when the music called for it.

After walking onto stage, violinist Luke Hsu turned around to conduct the beginning of Mozart's Concerto No. 3 in G major from the soloist's spot - a clear signal that he intended to fully take charge. He played with the orchestra for a while before dropping out to prepare for his solo entrance, all the time looking like he was thoroughly enjoying this music.

At age 28, Hsu has won top prizes at many competitions, including the Paganini, Wieniawski, Nielsen, Michael Hill, IsangYun, Singapore, Windsor and Montreal competitions. His former teachers are Cho-Liang Lin and Donald Weilerstein, and he currently studies with Rodney Friend.

In his performance of Mozart 3, Hsu started the opening chord (which is the same in both the tutti and solo parts) with an up-bow, creating a nice gesture for the orchestra to follow. He played with a great deal of energy and movement, performing cadenzas that he had written himself. Hsu's version of Mozart had more legato than bounce. On occasion, things felt a bit hurried toward the end of phrases.

During the second movement Hsu occasionally used fingerings that had employed one finger sliding from one note up to the next, and the resulting glissani created a slightly more Romantic feel than the more clean-cut separate-finger approach. Hsu wrung everything he could from each individual phrase, showing his good tone production. His second-movement cadenza used the opening phrase of the movement and branched out from there, again showcasing his fine tone.

Hsu is a player who never forgets he is on stage, creating excitement in every moment. It's a committed and generous approach, but sometimes the longer line is sacrificed in the drama of the smaller phrases and moments.

Hsu concluded his program with Kreisler's "Tambourin chinois." There were some minor struggles with double-stop intonation and rough bowing, but Hsu packed a ton of personality in every gesture and was rewarded afterwards with enthusiastic applause from the audience. 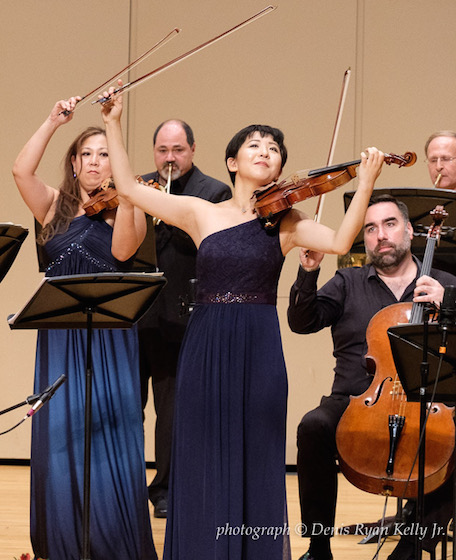 In the rarely-played first Mozart concerto, the soloist enters with a figure that feels a little bit like the opening solo in Mozart's third concerto. In fact, as the music unfolded it occurred to me that a number of the ideas throughout the first concerto appear in more fully-baked form in the later concertos. Still, this was a rare and welcome opportunity to hear this work, and to hear it live.

In the first movement, the concerto keeps the violinist busy with quite a lot of passagework, which Anna carried off industriously. Anna wrote all the cadenzas for her performance, and her first-movement cadenza showed off the way she can fill the room with tone, staying in the style of Mozart while also giving a nice tour of the fingerboard. In the second movement Lee connected with the orchestra by playing along until her solo entrance. The orchestration in this movement is a bit on the busy side, and there were a number of occasions when the orchestra covered Lee's sound: during a few sustained notes and at a few cadences. I longed for a wider dynamic to shape this music. The last movement went at a fast clip, and throughout Lee held a confident and comfortable stage presence, keeping connected with the orchestra.

For her Kreisler piece, Anna played "Caprice viennois" and from the beginning she had the spirit of that slide-filled slow part, followed by the faster sections, which she played with accuracy.

A shout-out to the musicians of the East Coast Chamber Orchestra, who treated each violinist with respect and sensitivity and brought a great spirit of collaboration to this part of the competition.

We will post the live-feed tonight and tomorrow on Violinist.com, with videos of individual performances to follow in the reviews. You can also find the live feed on the Indy Competition page as well as the archived videos.

September 14, 2018 at 10:17 PM · I love your comments! Translated to the violin competition world, they feel like sport comments - very well documented and accurate, they transport us straight to the center stage :-)