September 13, 2018, 1:51 AM · INDIANAPOLIS - Playing Mozart exposes a violinist's ability to bring accuracy and style to music that forgives nothing; doing so without a conductor adds yet another layer to the challenge.

This was (and is) the test for the six violinists that remain in the International Violin Competition of Indianapolis, where the Classical Finals started on Wednesday night at Butler University's Schrott Center for the Arts. For this session, violinists are required to play a full Mozart violin concerto of their choice with the East Coast Chamber Orchestra, and they must demonstrate their leadership abilities by doing so without a conductor. They must also perform an encore piece by Fritz Kreisler, choosing from among six that were orchestrated by 1994 IVCI Laureate Jaakko Kuusisto. (Those included Liebesfreud, Liebesleid, Schön Rosmarin, Tambourin Chinois, Caprice Viennois or La Gitana.) Wednesday's performers included Richard Lin of Taiwan/United States; Risa Kokamura of Japan; and Ioana Cristina Goicea of Romania. Thursday night's finalists will include Shannon Lee of the United States/Canada; Luke Hsu of the United States; and Anna Lee of the United States. Click here to watch the live stream for any of those performances and to catch up on any performances you missed, see the video below in this article or click here for the archived videos.

It was clear from the beginning that playing with the East Coast Chamber Orchestra (ECCO) would be different from playing with a typical ensemble. Warming up the evening with two movements from Tchaikovsky's "Serenade for Strings," members of the group stood (as they always do) while performing, moving to the music with abandon and projecting a friendly aura of camaraderie.

Richard Lin, 27, of Taiwan/U.S. was the first IVCI violinist of the evening, starting with a performance of Mozart Violin Concerto No. 5 that featured confident leadership and solid playing. Lin, whose former teachers are Lewis Kaplan and Aaron Rosand, is a graduate of both the Curtis Institute and Juilliard, and in the past he's garnered top prizes in the Hannover, Sendai, Singapore, Wieniawski, Shanghai and Michael Hill International Violin Competitions. 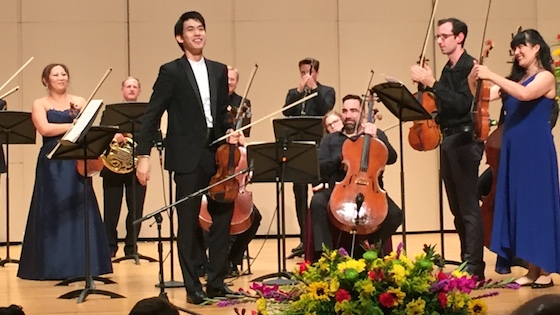 Immediately Lin established good communication with the orchestra, looking to concertmaster Susie Park to coordinate entrances and other musical details. Lin's stage demeanor was good-natured, matching the mood of the piece, and his pacing worked well throughout. His cadenzas -- those improvised-feeling show-off solo spots that occur at major cadences throughout the piece -- were well-crafted and elegantly played. Since I'd never heard those particular cadenzas I asked him afterwards who had composed them. Lin said that he had composed them himself for the most part, deriving inspiration for the first-movement cadenza from Ernst Hess; for the second-movement cadenza from G. Carmignola; and composing the third movement cadenzas completely himself. In the second movement Lin's opening melodic statement was sweet, simple and well-shaped, and he and ECCO created some nice drama together, as well as some truly poignant moments of music-making. The third movement was very articulate, and Lin's cadenzas were simple and fitting.

For his Kreisler piece Lin played "Tambourin Chinois," and I'll note that after hearing this piece so many times with piano, I really enjoyed Kuusisto's arrangement for orchestra, which changed the textures and allowed for more variation. Lin showed excellent control, and his well-executed glissandi (slides) brought out the sultry feeling in the slow part, followed by an energetic and downright cute ending.

Lin's Mozart 5 was not the only one of the evening -- all three candidates played the same Mozart concerto! So next was Mozart 5...

At age 17, Risa Hokamura of Japan is the youngest of all the Finalists, by six years or more. She studies with Oguri Machie, Kobayashi Kenji and Harada Koichiro at the Tokyo College of Music High School and in 2017 won second prize in the Music Competition of Japan. 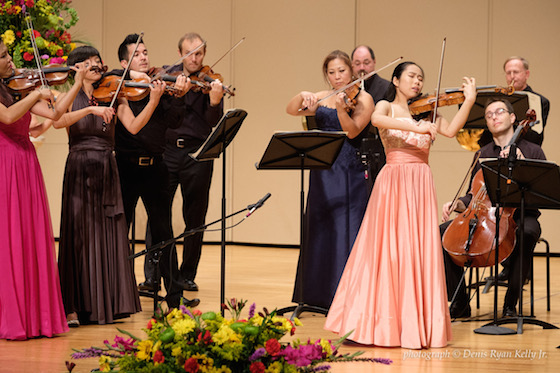 It was clear from her performance that Hokamura is a hugely accomplished player with a fine sense of musicality, but she had a rough night.

A highlight of her performance was the way she played her cadenzas, which were written by Joseph Joachim and have been the go-to cadenzas for Mozart concerti since the 19th century, played by students all over the world. In fact, I would recommend that students watch her performance of the cadenzas, which were well-paced, accurate and quite enjoyable.

During the second movement Hokamura seemed a little detached, playing with eyes closed, and then a major memory slip injected a feeling of unease into her performance. This movement is full of repeated sections, weaving into one thing and then another, and she simply took the wrong exit, then had to back-track. The third movement she played also with eyes closed, brightening a bit for the "Turkish" section.

For her Kreisler piece, Risa also played "Tambourin Chinois," finding a sense of the gestures in this piece and also getting those very fast notes.

Ioana Cristina Goicea, 25, of Romania was assertive and strong in the first movement of Mozart 5, and her collaboration with ECCO felt a little like a happy party. Goicea, who has studied with Petru Munteanu, Mariana Sirbu and Krzysztof Wegrzyn, is a veteran of the competition scene who in 2017 won First Prize in the Michael Hill International Violin Competition in New Zealand. 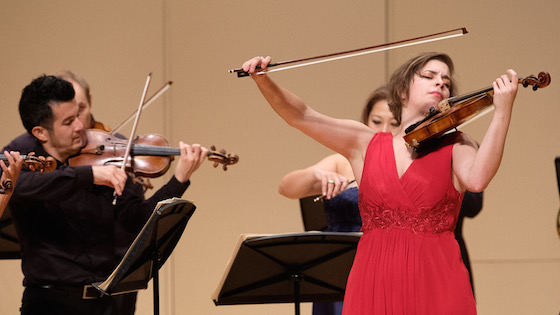 Goicea played with intention and a good sense of Mozart style, using the Joachim cadenzas, which at times felt a bit measured, but her presence with every note brought things off. In the second movement her opening melody was carefully shaped and attended to, without feeling overwrought. She had a moment when the bow when off-track, but on the whole this was a clean and solid performance. In the third movement she was able to inhabit the various characters and gestures within the music and bring them to life.

For her Kreisler piece, Goicea played "La Gitana," starting with a great Gypsy beginning. With its many and varying tempi, this piece seemed a challenge to lead, but as it unfolded both orchestra and soloist were increasingly on the same page, and the ending was extremely well-coordinated and satisfying.

Throughout the evening, the musicians of ECCO accompanied each violinist with sensitivity, earnest effort and a lot of energy.

Classical Finals continue at 8 p.m. EST tonight at Butler University. Click here to watch the live stream for any of those performances and to catch up on any performances you missed click here for the archived videos.

September 14, 2018 at 08:27 PM · Conductors are an obstruction and a hindrance. I can count to four without someone "swatting flies" in front of my face when I am reading the music. If music is only something you can hear, then conductors are non-musicians because they are not making any sound as they wave the baton. Get rid of conductors and give their salary to the musicians!