September 12, 2018, 12:07 PM · This morning I visited the 1683 Stradivari violin once played by the late violinist and pedagogue Josef Gingold and found it waiting in suspense for the outcome of the International Violin Competition of Indianapolis, which will determine its next home, with its next violinist.

Literally, the fiddle was suspended in a plexiglass case as part of an exhibition about the competition at the Indiana State Museum, located along a beautiful canal walkway in downtown Indianapolis. 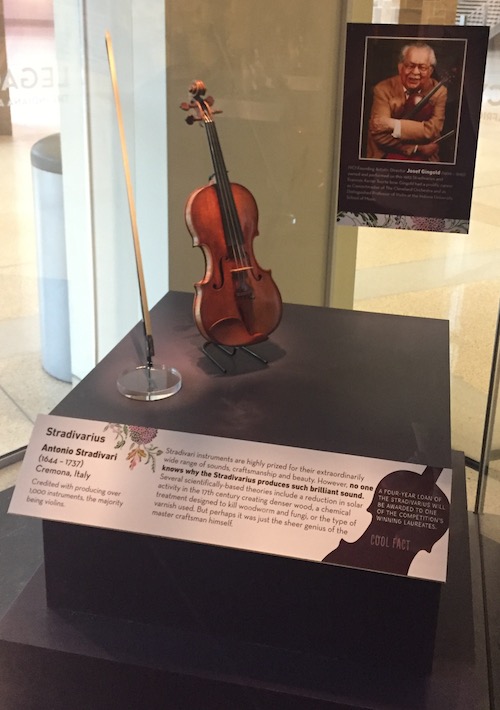 The 1683 "ex-Gingold" Stradivari, at the Indiana State History Museum.

The giant entry invited me in, and I found not only the Gingold Strad, but some thoughtful and educational displays (see pictures below): one inviting the viewer to try a violin; another showing a video documentary about the last competition; another offering a headset to listen to various violin pieces; and another with a display of a partly-made violin in the white that described how these instruments are made. Not only that, but the wall behind the exhibit was lined with the top work chosen from the art of more than 26,000 Indiana schoolchildren, who had been prompted to draw violin art after listening to violin music.

Back to the Strad, I'm happy to say that this instrument visits the museum only occasionally; it normally lives in the hands of violinists, thanks to the wishes of Gingold (1909-1995), the longtime Cleveland Orchestra concertmaster and Indiana University violin professor who helped found the quadrennial competition in 1984. Since that time, the competition has named 54 laureates representing 22 countries, and the Strad has passed through the hands of violinists Judith Ingolffsson, Barnabás Kelemen, Augustin Hadelich, Clara-Jumi Kang and most recently, Tessa Lark, who was the second-place laureate in the 2014 Indianapolis competition. Once the laureates are named on Saturday, the Strad will be made available to one of the laureates for the four years following the Competition.

Over the years those violinists have described the violin as having one of the sweetest sounds imaginable, but also rather finicky.

"The stories are true: it is a very temperamental instrument and it is difficult to play," said Lark, speaking to Violinist.com earlier this year. "I feel that Miriam Fried, who was one of my teachers during my college years, described this particular instrument best. When she was describing Josef Gingold's violin playing, she said, 'It wasn't a big sound, but it was a glorious sound.' I feel like that captures very well the strengths of this violin. The fact that Josef Gingold owned it, played it and cared for it with so much love -- it's all still in the instrument. So it's been an honor, every single day, despite the difficulties of playing it, to play it, explore it and to have that sound under my ear for a few years."

2006 Indianapolis laureate Augustin Hadelich, who played the instrument from 2006 to 2010, said that "Wherever I went, in every orchestra, every place, there was a student of Joseph Gingold who came up and wanted to see the violin. Gingold was so loved by everybody, and the violin really does sound the way he did. It's a really beautiful instrument, and I have to say, I learned a lot about playing on this violin."

This year's Finals will resume at 8 p.m. EST tonight, taking place in two parts. For the Classical Finals Wednesday and Thursday, Finalists are required to each play one classical concert (choosing from among Mozart's five violin concerto or Haydn Violin Concerto No. 1) with the East Coast Chamber Orchestra (ECCO). On Thursday and Friday, each Finalist must play a major violin concerto with the Indianapolis Symphony Orchestra. Click here to watch the live stream for any of those performances and to catch up on any performances you missed click here for the archived videos. Check back with Violinist.com for news and nightly reviews of the Finals.

Here are pictures from my visit to the museum: 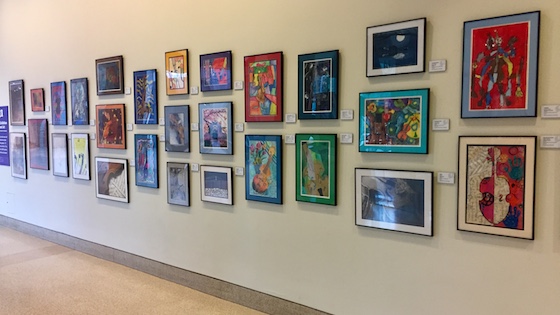 Artwork chosen from submissions by more than 26,000 Indiana schoolchildren, who had been prompted to draw violin art after listening to violin music. 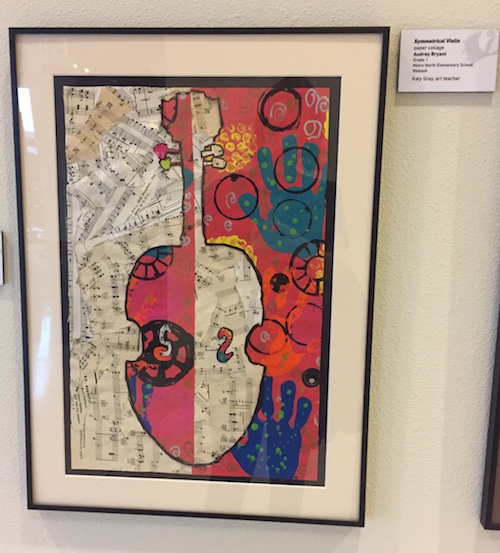 This art was created by a first-grader! "Symmetrical Violin" by Audrey Bryant of Wabash. 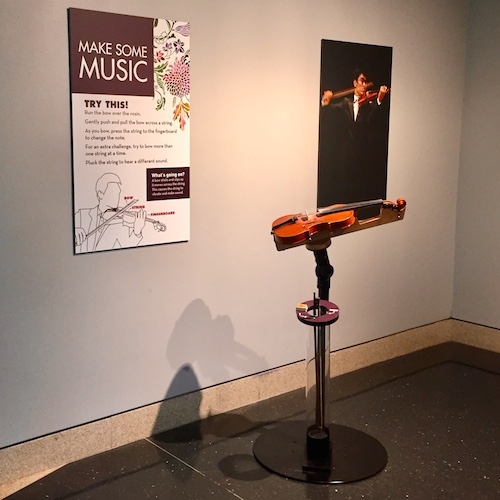 This display allows people to pick up a violin and bow, and give it a try. Prediction: they will not find it easy! 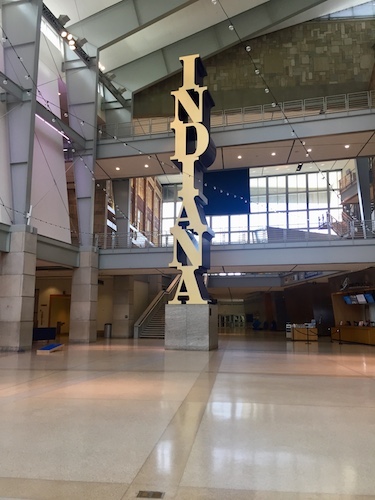 The bold entry, lest you forget your bearings! 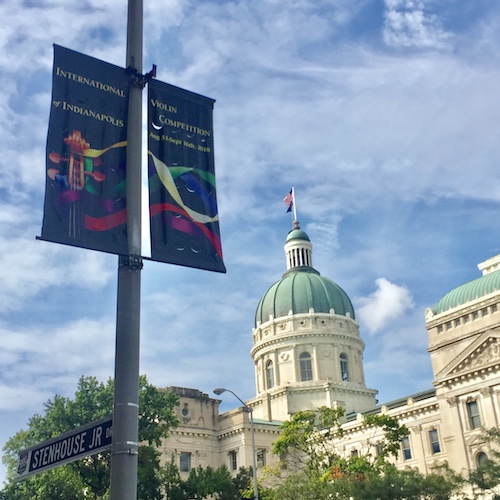 Out and about in Indy, signs of the competition are everywhere!

September 12, 2018 at 10:59 PM · A few years ago Miriam Fried spoke along with a number of other Gingold students at a program here in Indy that was a sort of celebration of Gingold’s life. I remember her describing how, at her first meeting with him, he cradled his Strad lovingly and said “Isn’t she beautiful?” At her tender age she was a bit taken aback by what she perceived as a bit too anthropomorphic, perhaps even lascivious fondness for his fiddle.

September 13, 2018 at 12:33 PM · I got to hear that violin up close when Lark played Saint-Saens #3 with our orchestra a few years ago. It is truly a lovely instrument and she played it well. Hopefully, the next musician will enjoy it as much as she did.

September 13, 2018 at 04:00 PM · Ms Lark will be one of the artists in the Seattle Chamber Music Society's winter festival in a few months. These festivals are always fantastic.

Every violin is beautiful.

September 16, 2018 at 09:11 PM · Thanks, Ms. Niles for the beautiful article. Though only an adult student of the instrument, I agree, we all DO love our fiddles. It’s hard not to look at a master’s work and not see the romance when you are passionate about it.

It was also good to read an article with a Cleveland Concert Master who had a positive influence. Unfortunately the headlines with our orchestra and it’s concert master have been disheartening, to understate the shame. I believe we are here to help each other along to the best that each of us can be, no matter your background, especially a teacher. When I am on site teaching my apprentice’s my trade, I am aware that I influence our collective future. Each person fits into the grand mosaic we live in. I wish everyone held that philosophy and treated each person in their sphere with respect and compassion.

Thanks again for sharing this article.