September 7, 2018, 12:01 PM · Welcome to "For the Record," Violinist.com's weekly roundup of new releases of recordings by violinists, violists, cellists and other classical musicians. We hope it helps you keep track of your favorite artists, as well as find some new ones to add to your listening! 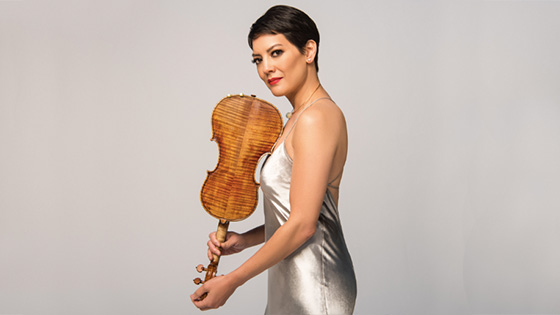 Ahead of the composer’s 85th birthday this fall, Deutsche Grammophon releases a double album of works for the violin by Krzysztof Penderecki in celebration of his longtime collaboration with violinist Anne-Sophie Mutter. Performed by Mutter, the double album features a number of the composer’s works for violin and piano or violin and orchestra, including La Follia, Duo concertante, Sonata No. 2 (dedicated to Mutter) and Metamorphosen. BELOW: Anne-Sophie Mutter speaks Krzysztof Penderecki about his Violin Sonata No. 2.

The great inventor and futurist Nikola Tesla, from whom the Tesla Quartet takes its name, talked of the invisible yet inseparable ties which bind people together. Through performance, teaching and outreach, the Tesla Quartet has for ten years strived to tap into this palpable feeling, using music to create meaningful connections with their audiences. Celebrating this first decade together, the quartets debut album draws upon the need for reflection, and to look upon the familiar in a new light. None did this more effectively than Igor Stravinsky, two centuries after Haydn pioneered the string quartet, and Ravels masterful contribution takes its place as a staple of the repertoire. The Tesla Quartet formed in 2008 at The Juilliard School, with violinists Ross Snyder and Michelle Lie, violist Edwin Kaplan and cellist Serafim Smigelskiy. BELOW: The Tesla Quartet plays Ravel.

A century after his death on March 25, 1918, Quatuor Debussy wished to honor a composer as who, long before Louis Armstrong and Bill Evans, was one of the creative artists who influenced the harmonic colors of jazz. Recorded in early 2018, this collaboration between Quatuor Debussy and leading jazz artists - accordionist Vincent Peirani, pianist Jacky Terrasson, percussionist Franck Tortiller, Belgian duo Jean-Philippe Collard-Neven on piano and Jean-Louis Rassinfosse on double bass - revisits Debussy's Préludes in a whole new way. BELOW: Excerpts from the album.

Learning How To Stay
Gaelynn Lea, violin and vocals

When Gaelynn Lea won NPR Music’s 2016 Tiny Desk Contest, her two decades as a hardworking and talented musician finally crystallized in a beautiful moment of national recognition. It was also just the beginning of a grand adventure. With the wind of her award at their backs, Gaelynn and her husband Paul sold their house in Northern Minnesota, quit their jobs, bought a van, and hit the road. Since then, Gaelynn has played over 250 shows in 42 states and seven countries, adding nearly 100,000 miles to their Ford Econoline’s odometer. "Learning How To Stay" is an 11-song collection ranging from folk to pop, as well as a couple of traditional fiddle tunes. In addition to performing and recording, Gaelynn Lea speaks publicly about disability awareness, inclusion in the arts, and leading an enriching life. Gaelynn has a disability called Osteogenesis Imperfecta (Brittle Bones Disease) and believes society must prioritize accessibility so that people with disabilities can participate in their communities and use their gifts without barriers or discrimination. BELOW: Gaelynn Lea's appearance on NPR Desk Concerts from 2016.