September 5, 2018, 8:09 PM · Sixteen semi-finalists have been named in the International Violin Competition of Indianapolis, which began Sunday in Indiana. They are: 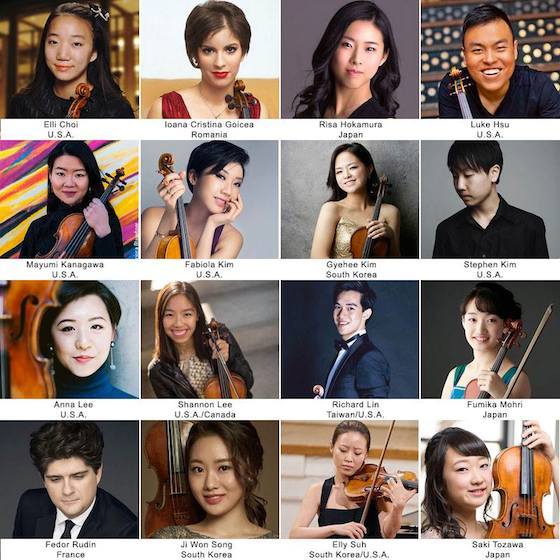 Semi-finals will take place Friday through Monday, with each of the 16 semi-finalists required to present a full recital showcasing 19th and 20th century works from the standard repertoire. This round also includes the World Premiere of the Suite No. 3 for Solo Violin by American composer William Bolcom. Here is the page for watching the live stream and catch up on any performances you missed on this page of archived videos.

Founded in 1982 by Josef Gingold, Indianapolis has hosted nine competitions, occurring every every four years, naming a total of 54 laureates from 22 countries. This year's preliminaries began with 38 violinists from 13 countries, ranging in age from 16 to 29. For the 2018 Competition, the IVCI received 123 applications from 25 countries.

September 6, 2018 at 03:36 PM · Quite a busy violin competition season! We just had Shanghai, now Indy, and next year in May the Queen Elisabeth competition in Brussels...

By the way Fumika Mohri is wonderful. She already reached 6th place in the Queen Elisabeth four years ago.

September 6, 2018 at 08:58 PM · Indeed! I will be in Indy starting on Monday, to see the finals and all the activities around the competition. Looking forward to it!

September 9, 2018 at 07:57 PM · I wish there were a better way of enhancing the careers of all these wonderful young violinists without the crassness of competition, which is better suited for the world of business or survival in the jungle. Heifetz would forbid his students from entering competitions. Look what happened to Erick Friedman at the Tchaikovsky Competition! Another hero of mine, Aaron Rosand, refused to enter competitions and still managed to obtain a formidable career for himself. And can you imagine how judges today would consider a unique and idiosyncratic talent like Ivry Gitlis? As Bartok once said, "competitions are for horses, not for artists."

September 12, 2018 at 10:12 PM · On the negative side, all the things you are saying, Alexander. On the positive side, though, it is a way to showcase many talented musicians and get them in front of an audience. Many of the participants that I speak to say that it is very motivating, that doing a competition gives them a goal that helps them learn a lot of repertoire and have a chance to perform it under pressure, which if they continue, is something they will have to be able to do well.