When Olga Šroubková, 25, of Czechia walked out on stage Saturday with no sheet music for Qigang Chen's "La joie de la souffrance" on the last day of the Finals of the Shanghai Isaac Stern International Violin Competition, everything got just a little more interesting. 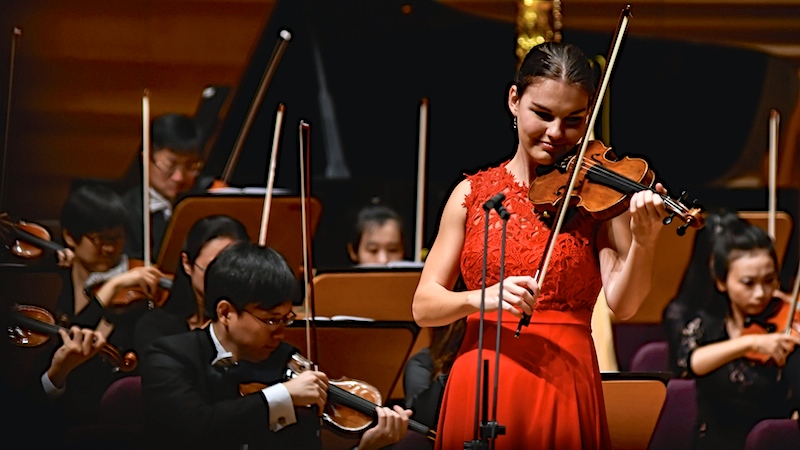 Playing with the Shanghai Symphony Orchestra conducted by Michael Stern, Šroubková was the last to perform, but she was the only one of the six finalists to play this 15-page piece without the music. (I learned later that she had shown up to the rehearsal with it memorized, so it was clearly her plan from the start.) The 25-minute concerto was commissioned by the competition as the required Chinese work that the contestants would have to learn from scratch. The sheet music had required a major extension of the music stand, with multiple pages taped together so that several pages could be turned at once -- just one more logistical challenge in an already rather challenging piece.

The payoff in memorizing the piece was a degree of mastery that put Šroubková at one with the music and the present moment; throughout the piece she gave the sense that she was both enjoying the music at hand and also looking forward to revealing what was next. The tricky passages came off as showy but not difficult for her; during moments of repose she was a commanding presence that held the audience still and quiet. She also interacted well with orchestra and conductor, demonstrating the dialogue between the two. On the whole she showed tremendous commitment to the piece and its performance (for which, later in the evening, she was awarded "Best Performance of the Chinese Work").

For her major concerto, Šroubková chose to play Tchaikovsky's Violin Concerto in D major, Op. 35, which she performed in a way that felt unhurried, and conductor Stern and the orchestra responded well when she took extra time or sped up. Šroubková seems to be a big-picture musician who understands that mastery is a prerequisite to making music while also meeting the considerable demands of a piece such as the Tchaikovsky. That said, there were a flew glitches, a few misses here and there. Throughout, she took care to create special moments. The rapid last movement had joy, wit, and also a clear line running through all those notes. At the conclusion and amidst the applause, she turned around and applauded the orchestra herself, and shook hands with the concertmaster. 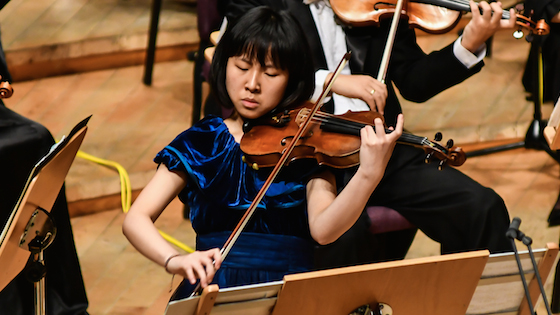 Before Šroubková, the evening began with a performance by Chang Yuan Ting, 18, of Canada, who played Qigang Chen's "La joie de la souffrance" as well as the Brahms Concerto (Ting was the only one to play Brahms for her major concerto -- there were three Tchaikovskys and two Dvoraks during the finals!)

Ting began Chen's piece with energy and intensity in every gesture, and for the first time in all the performances, the slides in the melody felt a little jazzy. (On the whole, the piece has sounded like six different concertos, and it has been interesting to see what ideas each young artist has found within it.) Ting has a very beautiful sound, but at times it did not penetrate the orchestra's sound. Ting leaned into the slower and more melodic parts of the music, creating some beautiful lines. But during the faster and more rhythmically tricky parts, her dependence on the sheet music created the sense that her concentration was fully locked on getting rhythms and notes correct, rather than a more outgoing sense of delivering the music to an audience. Toward the end of the piece she and the orchestra built some real excitement, and the quiet melody after that climax seemed especially heartfelt. High marks for the final, way-up-on-the-E-string melody, which she played very well in tune.

The Brahms violin concerto has one of the longer introductions in the literature; the soloist must wait for an entire symphonic exposition before finally entering. For Ting, things got off to a rough start, her considerable energy causing her to overplay the opening chords of the solo part. The first statement of the melody was quite lovely, as was much of her very high playing. She gained more control as the movement progressed but still had issues with managing energy for chords. There were moments of excellent control and mastery, and other moments where the need to concentrate on notes kept her from fully making music with those notes. During the second movement she went on a run where she seemed to really forget herself and create beautiful music, especially toward the end. The final movement, though, again presented problems with overplaying, keeping up with the fast tempo she set, and at the very end, some intonation issues. On the whole, Ting, who was the youngest of the finalists (by four years or more), showed great promise and I look forward to watching her progress.

September 4, 2018 at 06:43 AM · Nice read! It was also interesting to find out, only 1 point separate the first two :) so close it was. Thanks for all this writing, enjoyed following!!

September 4, 2018 at 02:44 PM · I can attest that it was very close! Here also is more about the Shanghai competition's philosophy about 'radical transparency' in dealing with juror/student conflicts