August 31, 2018, 9:31 PM · SHANGHAI -- One of the highlights on Day 2 of the Finals for the Shanghai Isaac Stern International Violin Competition was a standout performance by Jia Yi Chen, 22, of China of Qigang Chen's "La joie de la souffrance" with the Shanghai Symphony Orchestra, conducted by Michael Stern.

Chen was one of two violinists performing both the Chinese work and a major concerto on Friday night; the other was Diana Tishchenko, 28, of Ukraine.

Jia Yi Chen had a very good night, with strong playing that helped dispel doubts that may have been fueled by the fact that her teacher, violin professor Lina Yu of the Shanghai Conservatory, is a member of the competition's jury.

From the beginning notes, it was clear that Chen had taken "La joie de la souffrance" to heart and learned it well. She played it with confidence and control. In the Chinese melody that is threaded throughout the piece, her ornaments did not sound like accidents; they were intentional and well-dramatized to illustrate a style. 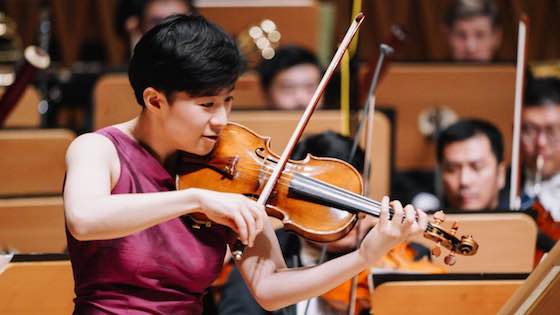 She was confident in passages that posed both technical and rhythmic challenges, and her assured and relaxed playing promoted a sense of ease for the listener. When she played the very high melody that ends the piece, it sounded like she was making music, not just trying to survive at altitude. On the whole her performance felt like it conveyed much of the emotional range that composer Qigang Chen, who was sitting in the audience, said that he intended.

In her performance of the Dvorak Concerto in A minor, Op. 53, Chen showed that she does indeed have strong chops for Romantic music, and here there were no general problems staying synchronized with the orchestra. She made very few mistakes (though for one, she made a face -- don't do that!) In the second movement she showed muscle where needed, but also finesse. At a certain point she seemed to be genuinely enjoying herself, which made it all the more easier for the audience to do so. Toward the end of the piece there was a moment of misalignment between orchestra and soloist but on the whole there was rhythmic clarity in both orchestra and soloist throughout the piece, which can so easily get muddy. Her performance was met with enthusiastic applause from the audience, many of which were Shanghai-based, as is she. 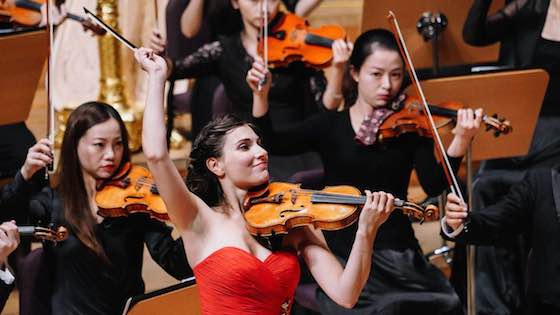 Before Chen's performance, the evening began with Diana Tishchenko, 28, of Ukraine, who also started with "La joie de la souffrance." She played with a rich and beautiful tone, though at times her sound needed more presence to be heard over the orchestra. The piece goes through episodes of emotion, starting low and slow, and in rather dark place. Toward the beginning is an extended passage with quite a lot of ricochet - in the context of a competition, it kind of over-emphasizes this skill, which caused some struggles for Tishchenko. Though I'd already heard this new piece a number of times, this was the first time that I noticed an episode that sounds a little bit "French," like a little wash of pointillism, the soloist a bright dot in a sea of color. (Olivier Messiaen was Qigang Chen's mentor, after all, and Chen does live in France).

For her major concerto, Tishchenko played the Tchaikovsky, and she had a clear sense of making the music breathe, allowing it to ebb and flow in a natural way, with unflappable stage presence throughout. One of the best parts of her performance was the interaction that the violin has with the woodwinds in the second movement -- she showed that chamber music sensibility that was in such evidence in earlier rounds and it was quite satisfying to listen to. She launched into the third movement very quickly, and the brisk tempo became somewhat frantic as the movement progressed. I think nothing would have been lost and a lot may have been gained from taking it just a bit slower. Tishchenko possesses a mature sense of musicality, great stage presence and beauty of sound, but on Friday a lot of little glitches piled up to cast some discomfort on her performance.

On Saturday night the Finals will conclude with performances by finalists Chang Yuan Ting, 18, of Canada and Olga Šroubková, 25, of Czechia, the other two finalists, Nancy Zhou, 25, of the United States and Yun Tang, 26, of China having performed on Thursday. Winners in this year's competition will be announced Saturday with a first prize of $100,000; second prize of $50,000 and third prize of $25,000. A prize of $10,000 will be awarded for the best performance of "La joie de la souffrance."