August 25, 2018, 8:54 AM · On Friday the semi-finals concluded in the Shanghai Isaac Stern International Violin Competition with six of the 12 semi-finalists performing Mozart's Concerto No. 5 in A minor with the Shanghai Symphony Orchestra, conducted by Zhang Jiemin. Six finalists were named afterwards (Click here to read more) -- an all-female lineup including Jia Yi Chen of China; Olga Šroubková of Czech Republic; Diana Tishchenko of Ukraine; Chang Yuan Ting of Canada; Nancy Zhou of the United States and Yun Tang of China.

Nonetheless, here are some thoughts and observations about the violinists who played Mozart on Friday, including videos of their performances. The performers included Quanshuai Li of China, Jiayi Chen of China, Sophia Su of the U.S., Yige Chen of China, Yurina Arai of Japan and Yun Tang of China. (Click here to read about and see videos of the first day of Mozart Concertos, with Diana Tishchenko of Ukraine; Alex Zhou of the U.S.; Arsenis Selalmazidis of Greece; Chang Yuan Tin of Canada; Nancy Zhou of the U.S. and Olga Šroubková of the Czech Republic.)

During the Mozart concerto, the violinists were required to perform their own cadenzas, which they submitted in writing five days before their performances. 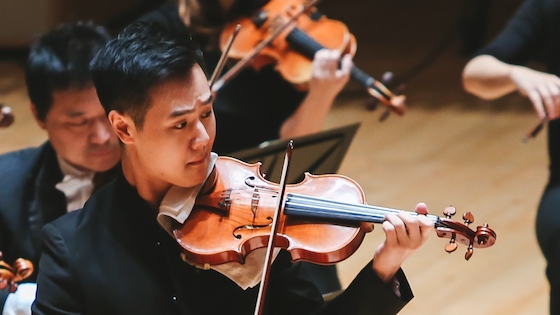 As I mentioned yesterday, Mozart 5 begins with a long orchestral introduction, and some performers choose to play along with the orchestra while others await their entrance as the soloist. Quanshuai Li of China opted to wait, then when he entered for the opening "Adagio" he produced that kind of violin sound with just the right tone and vibrato that makes people want to cry -- in a good way, of course!

Taking off for the faster "Allegro aperto," his playing was sensitive and gentle in approach. His passagework was pretty solid, which was welcome after quite a lot of fumbling from other candidates during Thursday's Mozart sessions. His cadenza began with a chord and then proceeded in what felt like a little mini-drama based on the movement's themes. For the second movement's opening, again he showed that heartstrings sound, connecting the notes in the theme rather than segmenting them, as many players did. The cadenza brought some good changes of mood and contrast in techniques. The third movement was spritely and nicely accurate, with brief and tidy cadenzas that fit well with the music. He was assured in his passagework and remained connected with the conductor. 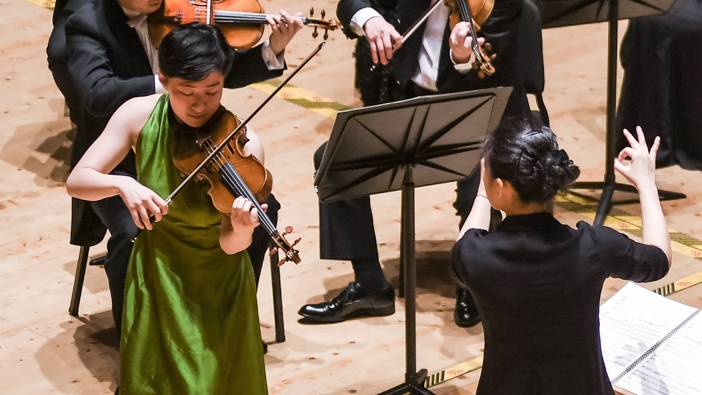 Jiayi Chen of China gave a clean performance, with clear contrasts and that Mozartian sense of question and response in certain parts of the opening movement. She put shape into her passagework and also stepped aside when the orchestra was featured.

Her first-movement cadenza began slowly, proceeding with moments of both stillness and movement. At times it seemed a bit disjointed. During the second movement theme Chen played the theme with commas: a decay on every second note. Here she showed that she does have a nice, full vibrato. (Throughout the semi-finals I noticed Chen's penchant for pure, non-vibrated notes, as well as open strings and decorations -- it made me wonder if she might make a very fine Baroque period performer!) In the development she created long phrases, and toward the end she added a few ornaments. The second-movement cadenza stayed pretty close to the basic themes of the movement. In the third movement she did some nice styling with these phrases. The "Turkish" section could have been a little more outgoing. At the end of Chen's performance, her teacher, Lina Yu, who was sitting in the jury, called out, "Happy birthday!" to her as she left the stage. A little jarring to be sure; and the topic of much conversation after the performance. Please see this article about the Shanghai competition's philosophy about jurors having students in the competition. 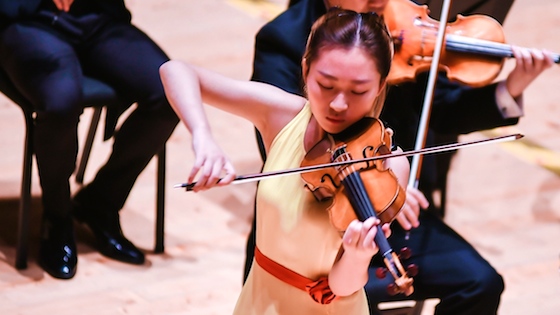 After playing the opening Adagio, Sophia Su of the U.S. added a little decoration to ease into the faster Allegro aperto.

On this day Su's fingers were simply not falling into the right places for the fast passagework that runs throughout this movement, and a fast narrow vibrato added to a sense of agitation. For the second movement her sound was clear, always making itself heard over the orchestra. For the moving notes in this movement she tended to use portato in the bow stroke, enunciating each note with the bow. The third movement was quite fast, sometimes putting her slightly ahead of the orchestra. 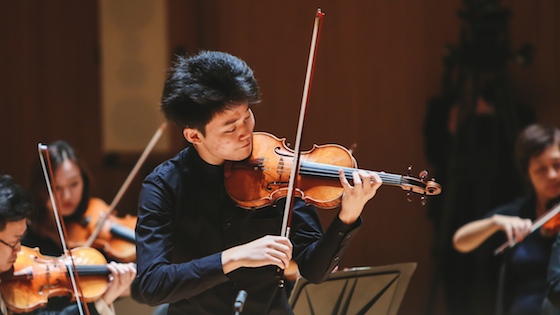 A number of trials awaited Yige Chen of China for his performance, including a cell phone ringing during the Adagio and a string snapping during the third movement. Chen handled it with grace and seemed completely unshaken, performing with steady confidence throughout. With Chen there is not a lot of physical movement; the key is the sound, and at the start of the concerto people seemed to lean in to hear it. He began the Allegro aperto with decisive energy, notes popping like bright colors.

His cadenza was elegant in the way it transitioned from one idea to the next -- and there were many ideas. It was quite creative, with some satisfying fireworks, played with polish. It ran long; I'm not sure if it exceeded the competition's limit of five minutes for each cadenza, which would have spelled trouble for him when it came to scoring. To me, though, it was interesting to the end and showed that he'd gone the extra mile, and then some. In the second movement opening I noticed a detail about the fingering Chen used; there were no slides; each note had an individual finger assigned to it, which added to the clarity. One oddity was a large down-bow retake within that phrase, which interrupted the flow. Toward the end of the second movement it grew clear that he was having issues with a string; I was seated next to the competition's luthier and we started wondering if his A string had slipped. Somehow he compensated and continued to play in tune, even during the double stops in his cadenza. (The second movement cadenza seemed to use a few themes actually from the third movement -- this was not against any of the competition's rules, but to me it seemed against the logic of improvising on an unfolding concerto; those ideas are yet to come.) The reason for the string-struggle emerged in a dramatic fashion when his E string simply popped during the beginning of the third movement. As it turned out, a fine tuner actually had broken. At this point he left the stage to rectify the situation (the person next to me running back stage as well). One of the first violinists went back and gave him the E string off his own violin, and thus sat out the rest of the session. After all this drama, Chen played the last movement with polish and energy; it was a pleasure to hear him play. 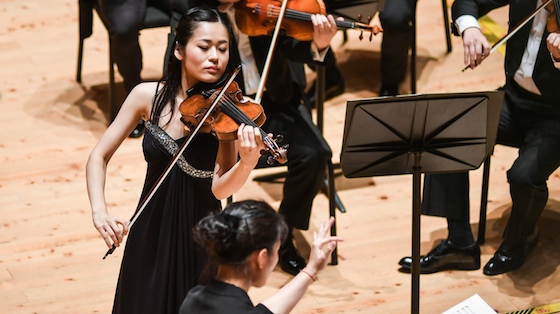 Yurina Arai of Japan made a good start with the "Adagio" and then played with animation in the "Allegro aperto."

She used harmonics fairly frequently for the many E's in this first movement, and that fingering is not always the safest bet; though the E's tend to come at important junctures, they did not always sound properly when played as a harmonic. As a number of other candidates did, Arai introduced some unrelated musical ideas in her first and second-movement cadenzas; I think there must always be a relation, even if it's a relation that you create within the cadenza; otherwise it can seems more like an interruption of the musical ideas than an enhancement of them. It occurred to me that candidates might need a set of rather specific guidelines for the way that they compose their cadenzas; not to dampen their creativity but just to provide some context for their work. 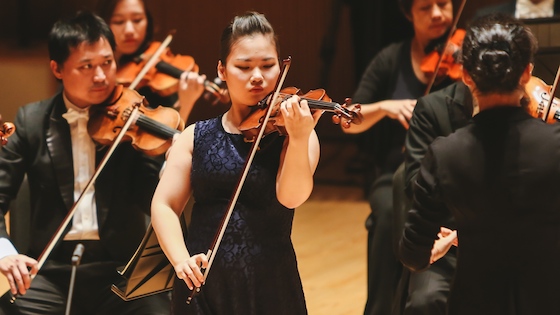 Yun Tang of China exuded comfort onstage, even before she played a note. The audience did not have to suffer any pangs of low-grade despair over flubby passagework because Tang resolutely nailed it. Her cadenza had a logic to it, leading easily from one musical idea to the next.

The slow-moving themes of the second movement can sometimes get fragmented along the way, but Tang made the entire movement feel like one long line. The second movement cadenza was a little weak; rather slow and seeming to introduce a different melody. The cadenzas worked well in the third movement, where they were short and clever, serving as a bridge between sections when needed. For the very last cadenza of the piece she actually threw in the opening notes of the first-movement "Adagio" -- a clever idea to come full circle, though I'm not sure it completely worked. She ended the piece by playing along with the last orchestral tutti until her closing figures as a soloist. An exciting performance!

After a few days of rehearsals, the final round of the Shanghai competition begins Thursday, with finalists required to perform "La joie de la souffrance," written by Chinese composer Qigang Chen; as well as a major violin concerto (Tchaikovsky, Brahms, Mendelssohn, Beethoven, Glazunov, Prokofiev 1, Dvorak or Bernstein Serenade). Winners will be announced Sept. 1.

I doubt it is a good idea to ask competitors to come with an original cadenza. It adds another element to an already complicated scoring task, thus rendering the ranking at the end even more arbitrary. Anyway: Who guarantees that all of those cadenzas were indeed composed by the competitors themselves?

On the other hand: To introduce elements of the last movement in the cadenza to the second movement strikes me as a rather clever joke: a nod at the fact that not only does the soloist know what follows, the entire audience does too and everybody knows that everybody else knows. If this should become routine I'd start objecting though.