How can this possibly work?

Several days ago I spoke with jury co-chair David Stern, who is the son of the late Isaac Stern, and I asked him just that. His answer: radical transparency.

Jurors' scores will be posted to the public, and during the competition Stern said he reminds jurors daily of this fact. (To see the scores, visit the competition website.) Not only that, after every round is complete, the competition holds a two-hour session in which each juror sits at a separate table and violinists who have been eliminated in that round can go around and speak personally, one-on-one and face-to-face, with each jury member. 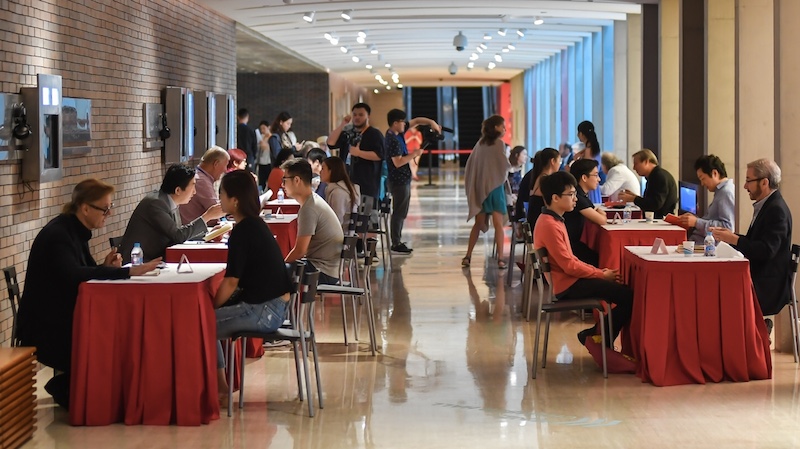 Jury members speak face-to-face with contestants that did not move on to the semi-finals in the Shanghai competition.

Stern's idea is to simply put it all out in the open, and then to put heavy incentives on voting honestly.

"We've decided to allow them to vote for their own students, but they have to claim that they are their students, so we know it's their students, and we see their scores," Stern said. In the program, contestants' biographies list their teachers. "Ultimately, and this is what I'm saying to the members of the jury: every vote is going to be scrutinized. What you write is going to be public, and you cannot erase it. So if you mess up, you will be taken to task."

Stern said that co-chair, Vera Tsu Weiling, a violin teacher herself, told the jury members, "Do not fear voting badly for your student, if that student did not do well. And do not feel badly for for voting badly for a student of a colleague."

When it comes to the finalists who were announced on Friday, some have connections with jury members and some do not. Also, some jurors' students did not advance, such as Bron's, whose former student won first place in the 2016 Shanghai competition.

In the interest of transparency, here is a run-down of the finalists in the Shanghai competition, their teachers and whether they are on the jury:

Contestants in the semi-finals who did not move on to the finals had the chance to speak face-to-face with jury members on Saturday morning.

"I take my role on the jury and other people's role on the jury very seriously. We have a responsibility, not just to give a number, it's to be there for each one; really to listen, really to consider their performances," Stern said. "We hold the talk-back sessions, and the points are posted on the Internet. Every point we write down, we have to be able to defend, discuss or just be responsible for. We're not just giving numbers; we have to stand behind those numbers. I don't think it should be easy for the jury. It is the responsibility of any musician who has had a career, that in the face of helping young artists, we have to be at the level. We cannot compromise, we cannot play games. And if you say that you like somebody, you have to say why. And if you don't like someone, you can't just say, 'for whatever reason,' you have to have reasons."

David Stern speaks with great sincerity about this system, and though it is a departure from the elaborate and mathematical models that other competitions have designed to deal with conflicts of interest between jury and contestants, there are certain benefits to this novel solution of public scrutiny and face-to-face meetings between jury members and contestants. Time will tell, if it is a system that the public and our community comes to trust.

When it comes to whether the jury "got it right" and whether the finalists in this particular competition deserve to be the finalists, this is always a matter of opinion. All the violinists in the competition played at a high level, some more than others. I was not here for the quarter-finals, but I was here for the three arduous rounds of the semi-finals and heard every single one of the 36 performances. See my blogs about those sessions for my specific observations; I will not pick favorites or treat this like a horse race and predict winners. But I will say this: the violinists who gave what I would consider the obvious top three or so performances in terms of technique, musicality and stage presence, were selected for the finals, and to me that mattered most.

The scoresheet of the ones eliminated after the quarter final reveals a lot about different tastes...

Runyin Zhang had had the highest score that Vera Tsu gave (90) and the lowest that Daniel Heifetz and Setzer gave (10). Quite a difference.

If you do a bit of searching, you’d see that this Chinese student is a student of Vera Tsu

August 25, 2018 at 11:38 AM · I read this with interest because of its analogy to my experience in an unrelated world - that of oral specialty Board examinations in ophthalmology. Ophthalmology too is a very small world, and many candidates that are known to examiners through residency or fellowship must qualify for Board certification. The practice of the American Board of Ophthalmology has been to send examiners the names and photos of all candidates prior to the examination. If an examiner knows a candidate, they must declare it, and recuse from all aspects of that individual’s examination. I’ll leave it to the professional violinists to determine if this is a valid comparison or not, but it struck me as a similar, and equally difficult issue for violin competitions.

August 26, 2018 at 10:54 PM · As someone who is doing some statistical analysis on the scores, I'd really like to know how the YES's and NO's are assigned. If you do it by straight score value, I don't think it's fair because the judges don't give scores in any standardized way that I can see.

Also, thinking about it from a psychological point of view, different judges probably have slightly different criteria for how much they like a contestant. Given that, you might expect a contestant's teacher to rate them higher simply based on the teacher's esthetic values, which they undoubtedly would have passed on to their student.