August 23, 2018, 10:25 AM · In some ways, performing a Mozart concerto can be more difficult than performing a Paganini caprice.

Don't get me wrong - certainly the acrobatics required for Paganini are more difficult than for Mozart, and mastering such a work requires a much higher level of straight-up technical skill. But performing Mozart? Even with a complete mastery of the notes, it can still feel like one of those dreams in which one has forgotten to wear clothing. There is nowhere to hide in Mozart - it is simple, yet it absolutely does not play itself. It's up to the performer to inject it with a sense of style and personality. And because of its simplicity, every tiny blunder is extra-conspicuous.

This challenge is one of the reasons why an entire session of the semi-finals at the Shanghai Isaac Stern International Violin Competition is devoted to the performance of a Mozart concerto. Thus on Wednesday (and Thursday) violinists were required to play Mozart Concerto No. 5 in A major with the Shanghai Symphony Orchestra. Adding to the challenge, each of them had to write his or her own cadenzas, which are improvisations played at various cadences throughout the piece.

If you wish to see the performances: unfortunately the Shanghai competition had to cut its Facebook live video feed due to mistaken rights management copyright claims, so upcoming performances will not be live-streamed on FB. However we will continue to provide the videos as they become available after the performances, in this blog and on the Violinist.com Facebook page.

These performances with the Shanghai Symphony Orchestra were led by conductor Zhang Jiemin, but for context, it is not unusual for a soloist to lead the ensemble, without a conductor, in Mozart. Either way, the soloist must show a degree of leadership, to keep things together. 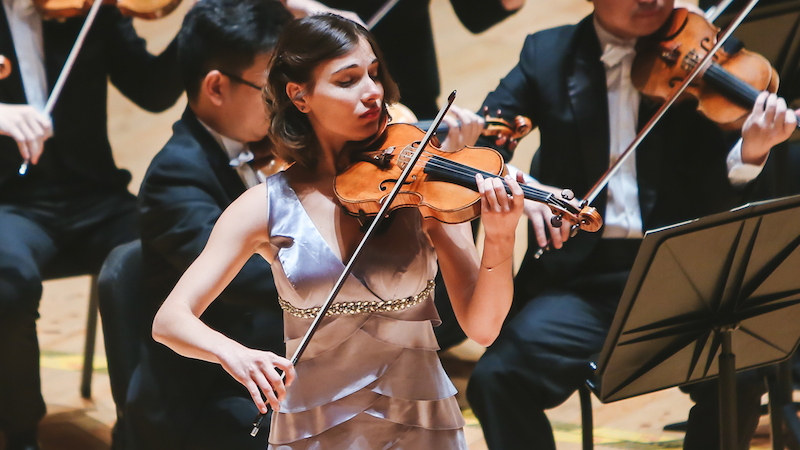 The first performer of the morning, Diana Tishchenko of Ukraine, chose to wait and enter as soloist. The soloist actually begins not with something flashy, but with a kind of dreamy "Adagio" (I see it as a loving ode to how beautiful A major sounds on the violin.) Then it launches into a jaunty and more up-tempo "Allegro aperto." Tishchenko immediately injected personality into her performance with little cadenza at the end of that Adagio, a sort of good-natured flourish to lead into the Allegro aperto. Soloists don't always improvise here, but this worked nicely. Tishchenko seemed like the kind of performer who would have thrived just as well without a conductor; she was well aware of the orchestra part, turning toward the horns when they entered, then toward the violins as if to cue them. Her playing was light and elegant.

Her first-movement cadenza was a mix of many styles, including some clips of Chinese music - I'm pretty sure I heard a quote of the Butterfly Lover's Concerto! There were many, many ideas in this cadenza, and I don't think she was quite finished playing through them when the orchestra came in, rather awkwardly interrupting her cadenza! No doubt, with 12 all-new cadenzas that are not familiar to the orchestra or to conductor, this is one of the risks! Tishchenko smiled at the mistake and handled it with grace. The melodious second movement was satisfying in Tishchenko's hands, with plenty of beautiful tone on display, and this time the end of her cadenza dovetailed nicely with the orchestra part. The last movement is a rondo - a minuet theme (a dance in three) that repeats many times in different forms, which is interrupted by a raucous "Turkish" melody, before returning to the minuet melody at the end. There are about a half-dozen places where a short cadenza is appropriate. Tishchenko made the rhythmic variations clear for the changing minuet, and the "Turkish" theme was well-articulated. 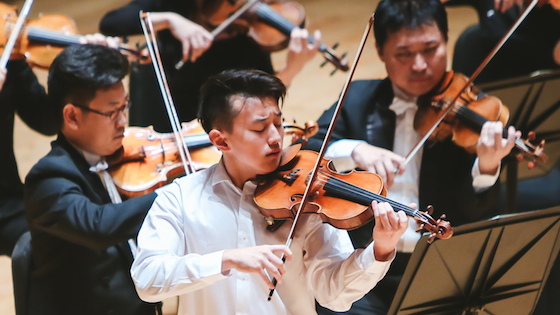 Violinist Alex Zhou of the United States chose to begin the concerto by playing along with the orchestra part for its long introduction -- this can actually be a nice strategy for connecting with the orchestra and keeping warmed up. His opening line was nice and pure, then he began to have some troubles with a whistling E string, which returned for the double-stops at the beginning of his cadenzas.

Some tiny misses also made for a mild sense of insecurity. The second movement showed his excellent vibrato and ability to spin a beautiful line, particularly in the development. His second movement cadenza filled the hall with nice sound and seemed to capture the audience's attention well. The third movement felt the most comfortable - with more polish and better connection to the orchestra. His cadenzas were graceful, especially one that used the octave and seconds from the Turkish theme and slid back into the Rondo.

During Zhou's performance orchestra seemed to go a bit out of tune; the extreme humidity here (and attendant extreme air conditioning) could be a factor, but the strings seemed flat to the horns, with the oboes a bit higher than that. This disparity seemed to be remedied for the afternoon performances. Unfortunately, throughout the day the horn section sounded strained on high notes, with garbled entrances marring parts of every performance. 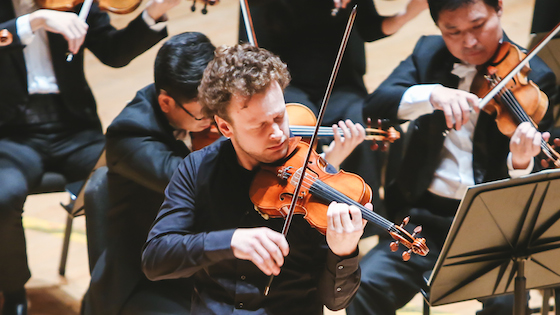 Arsenis Selalmazidis of Greece delivered nice punchy start to the Allegro aperto, with exciting energy. Overall his bowing was decisive, and at one point he added some delightful ornaments where no one else did. But little imperfections started to add up -- a missed shift here, a missed note, a part of a passage. His first-movement cadenza was creative and well-performed.

In the second movement his sound had good presence and he seemed committed with every phrase and gesture. Again, though, there were some shifts missed. The cadenza started where the orchestra ended then went into some chords and double-stops - very inventive but at times straying rather far from the themes in the movement. There were aspects of his third movement performance that were quite polished, and then there was some confusion during his final cadenza that caused him to simply stop and skip to the end of it. Whether there might have been some confusion with an orchestra entrance that caused this problem, I'm not sure. 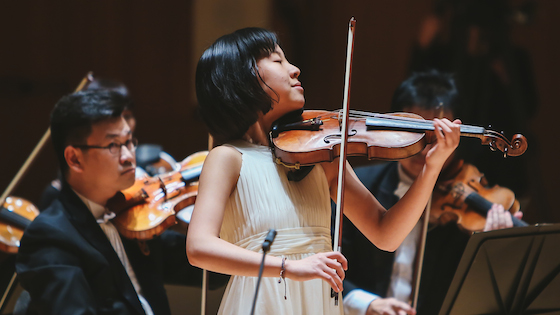 Chang Yuan Ting of Canada had a slightly more legato approach to her first movement; still good-natured but not in a bouncy way. Her sense of musical decay was in line with Mozart style, but at times her sound disappeared after a note was initiated. Her cadenza used themes from the movement.

She showed beautiful tone and vibrato in the second movement, fitting into the orchestra and closing her eyes. Her cadenza harmonized melodies from the movement with double stops. The third movement was straightforward and well-played, if a little on the careful side. I longed for a little more bite in the "Turkish" melody, which also had a few flubs. The cadenzas in this movement at times seemed out of context, but the last one especially had a lovely ending. 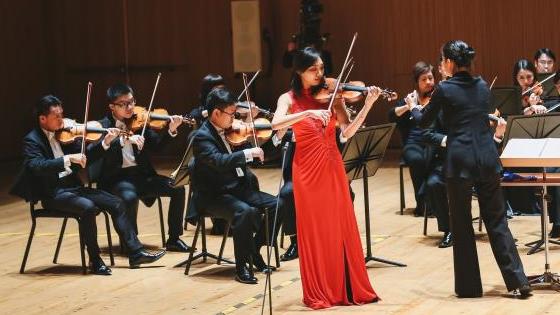 Starting by playing the introduction with the orchestra, Nancy Zhou of the United States seemed determined to ensure no lagging in the up-tempo speed she had chosen for the first movement - clearly the fastest of the day. She waited for silence before playing a beautiful Adagio, to which she had appended a clever accelerating cadenza that led into the Allegro aperto.

Though this was a fast tempo, it was a steady one, thus it felt settled most of the time, with room to breathe. Again, this may have been a situation where the violinist could have led without a conductor; it was clear that all were following Zhou. For the most part her passagework was in very good order, but for one brief but total flub, which seemed to shake her a bit. Her cadenza started as the Allegro aperto does, using figures from the movement such as a descending scale pattern. The cadenza's relationship to the movement was clear; it seemed an organic improvisation. The second movement was quite beautifully played, with long lines and phrases sustaining the musical interest, with a cadenza that was tasteful and well-executed. During the last movement her cadenzas were just right, serving as a nice bridge from one part of the music to another, rather than a confusing interruption. In the "Turkish" section Zhou called for a quirky all-down-bow bowing in both the orchestra and solo part. Overall, Zhou's cadenzas were very effective and stood out for being organic and well-written. 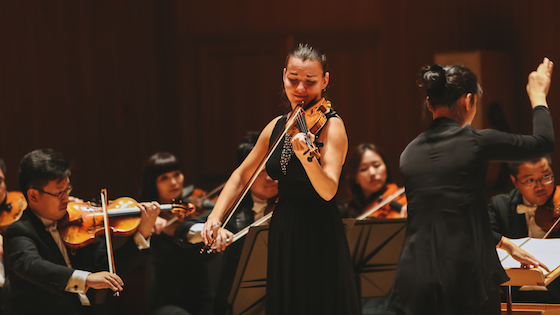 Placing herself where the conductor could see her well, Olga Šroubková of the Czech Republic did not play with the orchestral introduction but waited to come in as the soloist. Her adagio was simple and satisfying, relishing in the "A" trill at the end; then her playing was clean for the Allegro aperto.

She did not escape some fumbling (no one did, today), but it was minimal. The first-movement cadenza was a well-played multiple-voice invention. Her second movement theme was played with more connectedness, and the development was effective in the way the music grew more and more insistent. During the third movement she communicated with the conductor exactly when her cadenza was ending and the orchestra should enter. Though she had not done so in the beginning, at the end she played the tutti (with the orchestra) and helped lead the music to an elegant conclusion.

Friday the Mozart semi-finals will continue with performances by Quanshuai Li of China; Jiayi Chen of China; Sophia Su of the U.S.; Yige Chen of China; Yurina Arai of Japan and Yun Tang of China. There will be no live-feed on Facebook but we will post videos, both here and on the on the Violinist.com Facebook page, as they become available. Finalists will be announced and posted here Friday, upon the conclusion of the semi-finals.

August 24, 2018 at 07:43 AM · Diana Tishchenko is making a great impression throughout this competition, she is definitely in the running to win this.