August 21, 2018, 9:24 AM · The level is high and the playing is worth hearing this week at the Shanghai Isaac Stern International Violin Competition in China, and after watching all the semi-final rounds (so far!) I've put together some commentary and context, along with links to the videos for each individual performance, so that you can watch yourself and show to students and others who may be interested.

Later this week, the last of the semi-final sessions, a Mozart round with original cadenzas, will begin. You can find the video and live feed starting Thursday and Friday for these performances on Violinist.com's Facebook page (click here), as well as more blogs on Violinist.com following the performances.

On Monday, there were three sessions at Shanghai Symphony Chamber Music Hall that featured performances from six of the 12 violinists in the semi-finals: Quanshuai Li of China; Jiayi Chen of China; Sophia Su of the U.S.; Yige Chen of China; Yurina Arai of Japan and Yun Tang of China. The other six semifinalists performed Sunday (click here to see that blog). For these sessions contestants had to choose between two sonatas for violin and piano: either Beethoven's Sonata No. 3 in E major, Op. 12 or Brahms' Sonata No. 2 in A major, Op. 100. They also were required to play a piece by Fritz Kreisler, with 10 specific pieces from which to choose. 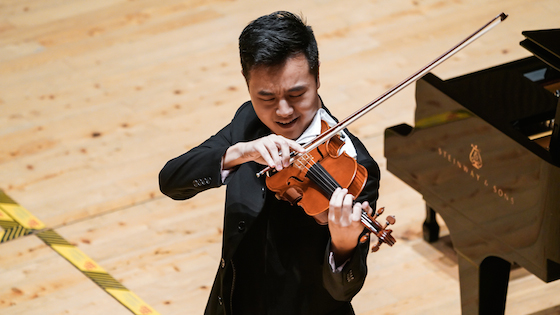 The first session of the day started in a rather unexpected way -- violinist Quanshuai Li was just about to lift his bow to the strings when a loud cell phone jolted everyone in the room. (This happened despite an elaborate system for leaving cell phones and purses outside the hall; thankfully it didn't happen again.) Li handled it with grace, starting the day with Beethoven's Sonata No. 3 in E flat major. (click here to hear his Beethoven and click here to hear his Kreisler). Li studied with Vera-Tsu Weiling at the Central Conservatory of Music in Beijing, with Kurt Sassmannshaus at the University of Cincinnati College-Conservatory of Music and with Linda Wang at the University of Denver's Lamont School of Music. The Beethoven strongly features piano, and pianist Jonie Huang had some clear difficulties in this performance. Nonetheless when the piano was featured Li demonstrated a quality of supporting without disappearing into the background and of placing accompanying figures with precision. Some of his strongest playing came in the second movement, where his excellent use of dynamics created a beautiful long crescendo. A few notes fell by the wayside in the last movement, as well as in his Kreisler piece, "Recitativo and Scherzo-Caprice." 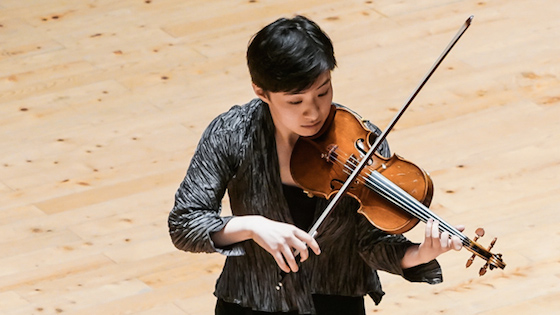 Next was another performance of the Beethoven sonata, with violinist Jiayi Chen of China and pianist Yingjia Xue. (Click here to hear her Beethoven and click here to hear her Kreisler performance) Chen currently studies at the Shanghai Conservatory of Music with Lina Yu. Chen is a highly competent player, though her sound was occasionally drowned by the piano in the first movement of the Beethoven. The opening solo in the second movement would have benefitted from a more active left hand; Chen simply did not use much vibrato, which could have been either a technical issue or an aesthetic decision, but the effect was one of lower energy. The punchy and active last movement seemed to suit her much better; she seemed to enjoy it and come alive. She also seemed more committed to Kreisler's "Tambourin Chinois," which highlighted her muscle and speed and showed a strong musical side. 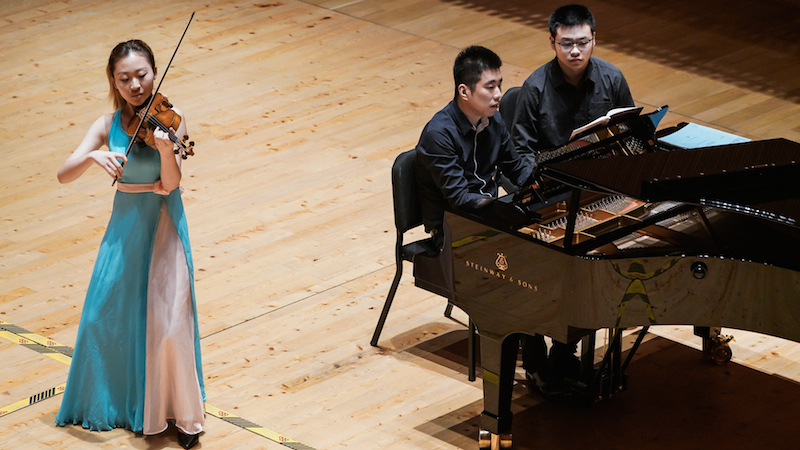 Sophia Su of the U.S. Photo courtesy of SISIVC.

Sophia Su of the United States was the only violinist of the semi-finalists who chose "Syncopation" to play as her Kreisler piece, and she started her performance with it. (Click here to hear her performance of both works.) Su, 17, studies at Juilliard Pre-College with Cho-Liang Lin and Masao Kawasaki. "Syncopation" was a delightful choice and Su tossed it off with humor and convincing affect. Su also played the Brahms sonata, and it was obvious from the beginning that she was well-aware of the piano part, played by pianist Yingjia Xue. Su played generally with a fast and narrow vibrato and a clear sound that projected well, with every phrase carefully sculpted. Her tempo in the third movement did not leave the pianist much room to maneuver or to be expansive, but Xue managed to get all the notes in with grace and precision. 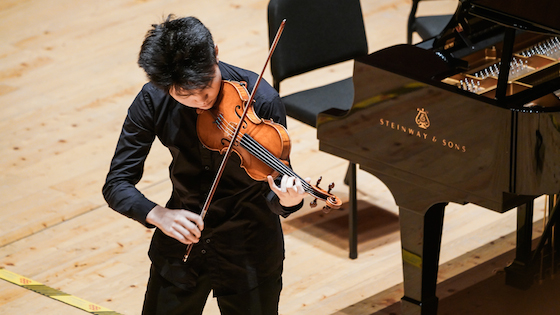 As he did in the Haydn quartet round earlier this week, Yige Chen of China warmed up the more he played, performing the Beethoven Sonata and then Kreisler's "Recitativo and Scherzo-Caprice" Op. 6 for solo violin. (Click here to hear his Beethoven and click here to hear his Kreisler performance.) Chen studies with Liu Xiao at the Central Conservatory of Music in Beijing. I immediately noticed Chen's excellent playing position -- students take note! Chen actually played with fairly minimal physical motion, but he was quite effective in cuing and communicating his rhythmic and musical intentions with pianist Yingjia Xue, and their performance was impressively coordinated. During the second movement he showed a special ability to remain still but draw the audience in with his sound, creating a sense of energy during a slow passage. When he had accompanying figures, Chen gave the pianist room to be musical. His fast notes "popped out" nicely during the third movement. His Kreisler performance was polished, with Chen again drawing the audience into silences during calm passages and then showing control and clarity during more virtuoso passages. 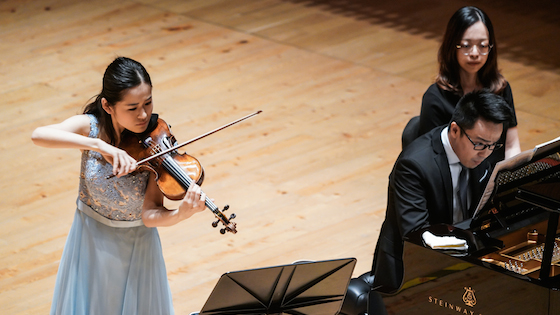 Yurina Arai of Japan played the Brahms sonata, followed by Kreisler's "Recitativo and Scherzo-Caprice" Op 6. (Click here to hear her performance.) A graduate of the Tokyo University of the Arts, Arai currently studies with Dora Schwarzberg and Lothar Straub at the University of Music and Performing Arts Vienna. Arai made generous use of her bow and was somewhat soft on articulations in places. Phrases in the second movement tended to be continuous, with a bit less ebb and more flow. Her "Recitativo and Scherzo Caprice" was full of very impressive playing, though in the thicket of fast notes I didn't always hear clarity in the musical ideas. 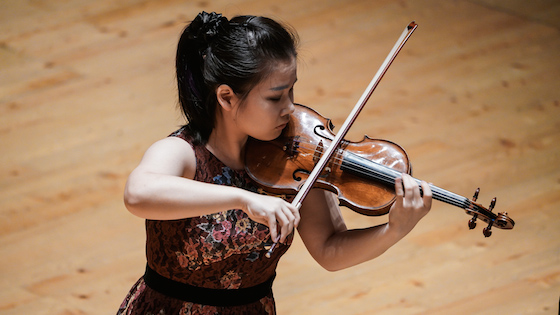 For her performance of the Brahms Sonata and Kreisler's "Tambourin Chinois, Op. 3," Yun Tang of China had a pianist she had brought along, Yu Nitahara. Click here to hear her performance of both works.) Tang was the only contestant with a "personal pianist," and this made me wonder why she was allowed what seemed like a privilege - after all it's likely easier to play with a longtime chamber partner than to put things together with one rehearsal with the competition's designated pianists, as good as they are. As it turns out, all contestants had the option of bringing along a pianist, as long as they applied in advance, and the competition even arranged the hotel. Tang studies with Pierre Amoyal at the Mozarteum University Salzburg, having previously studied at the Shanghai Conservatory of Music with Lina Yu. As it turned out, her choice to bring along her own pianist was a good one; they played with impressive synchronicity that allowed a rare chance to truly discern exactly the way Brahms juxtaposed certain rhythms - putting three against two, creating interesting hemiolas, etc. Through her performance I came to absolutely trust her judgment, even when she did things a bit different from my personal preference, because she did them with conviction, musical integrity and complete commitment. Kreisler's "Tambourin Chinois" Op. 3, with its rapid notes and exotic but maybe-not-quite-Chinese feel, was a light and even cute way to end a long day.

Later this week the semi-finals will continue with each contestant playing Mozart Concerto No. 5 -- with their own cadenzas -- with the Shanghai Symphony Orchestra. Find the video and live feed for these performances on Violinist.com's Facebook page (click here).