August 18, 2018, 8:26 AM · Today was my first day in Shanghai, and I arrived just in time to miss the monsoon that blew through earlier in the week but to catch quite a lot of Haydn quartet-playing for the first day of the semi-finals at the Shanghai Isaac Stern International Violin Competition! I'll writing a diary from China for the next two weeks, until the winner of the competition (who will receive that record-breaking $100,000 prize) is announced on Sept. 1.

For today's performances, each of the 12 semi-finalists served as the first violinist in a performance of the first movement of Haydn's Quartet No. 2 in D minor, Op. 76 with members of the New-York based Shanghai Quartet, including violinist Yi-Wen Jiang, violist Honggong Li and cellist Nicholas Tzavaras. (The usual first violinist for group is Weigang Li, who is serving as a member of the jury for the competition. Li also was featured in the 1980 documentary film From Mao to Mozart: Isaac Stern in China.)

The quartet took great pains to allow each of the 12 violinists to put their own stamp on his or her performance, even creating 12 separate versions of the sheet music. I spoke to them about that afterwards. 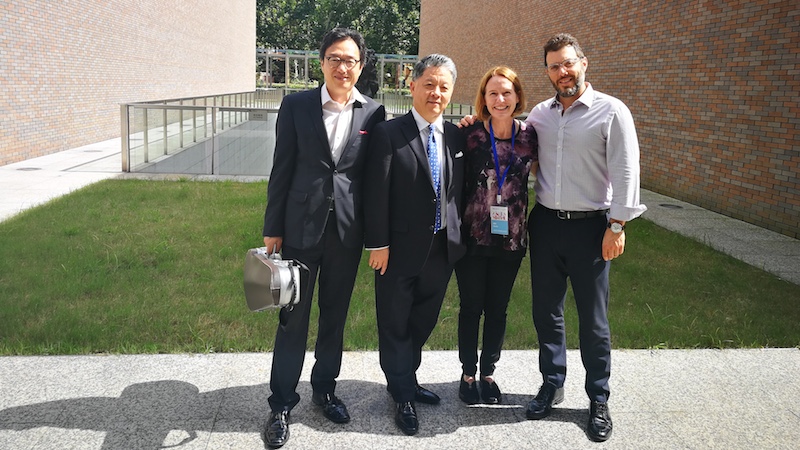 "Everyone had different stylistic interpretations, so we had the idea that we would ask the competition to print music for each player, for each part for us, so each of us had 12 parts," cellist Tzavaras said. "That way we could be more precise with following their desires."

"It could be the opposite, that we would turn everybody into our own first violinist!" violinist Jiang said, laughing. But in all seriousness, "I think that would be unfair to the contestants because they are so different. Some of them already had a great deal of chamber music experience, you could tell from the first bar. And some not as much. Either way, we didn't want to influence them; we let them decide what they wanted to do."

To that end, each contestant had a 45-minute rehearsal with the group before the performance, and the quartet allowed each contestant to completely run that rehearsal. During each rehearsal they marked the special version for that particular violinist, taking note of tempos, articulations, phrases and bowings that they needed to adjust for each player. "They all had different timings, they took different liberties, different bow strokes," Tzavaras said. Using the individual parts that they created, "we could be free with them, but we could also anticipate what they wanted to do."

"Sometimes there were very different interpretations," Tzavaras said. "Our job was not to instruct, our job was try to enhance their idea, to make it even more obvious to the judges and to the audience. We wanted to follow their lead and make sure that they were the interpreter, and we're supporting them."

Was it boring to play the same movement of the same quartet, 12 times in a row?

"It's like having 12 different chefs prepare the same dish," Tzavaras said, and the others agreed. "It's kind of fun because you think it's going to come out the same, but actually it can be quite, quite different. Some of them did backwards phrasing but my hat went off to them because actually the more unique the interpretation, the more vivid the performance for the audience, whether you agree or disagree."

To that end, I was a member of the audience and saw each performance. Overall, the violinists showed an excellent understanding of the style of Haydn, had a good sense of ensemble and had notes well in hand. It's no easy task to distinguish oneself in this good company, but they definitely showed personality and different strengths. Here are some of my impressions of the individual performances:

The first performer of the morning was Diana Tishchenko of Ukraine, who showed buoyant leadership, playing with accuracy and elegance, as well as a balanced sense of when to emerge and when to back off within the ensemble. She was definitely a team player, looking at and coordinating well with other members of the quartet. Alex Zhou of the United States had everything well in hand; for the most part he led well but on occasion seemed to be riding the car rather than driving it. Arsenis Selalmazidis of Greece had strong energy and was very articulate in his bowing. The last passage, which is quite fast and has some tricky entrances, veered a little toward danger but that sense of risk also made it quite exciting. The first thing that was noticeable about the playing of Chang Yuan Ting of Canada was her exquisite sound. She kept a great sense of rhythmic coordination through the movement, though at times her playing was ever-so-slightly sharp in pitch to the rest of the group. Nancy Zhou of the United States gave a performance that was simply pleasurable and interesting to watch. Her sense of rhythm was a bit more spacious, with more rubato throughout, which gave it an overall sense of good pacing. Her fast passages flowed and did not feel hurried. Olga Šroubková of the Czech Republic played with an excellent sense of dynamics with well-graded crescendos and decrescendos and a strong ending. 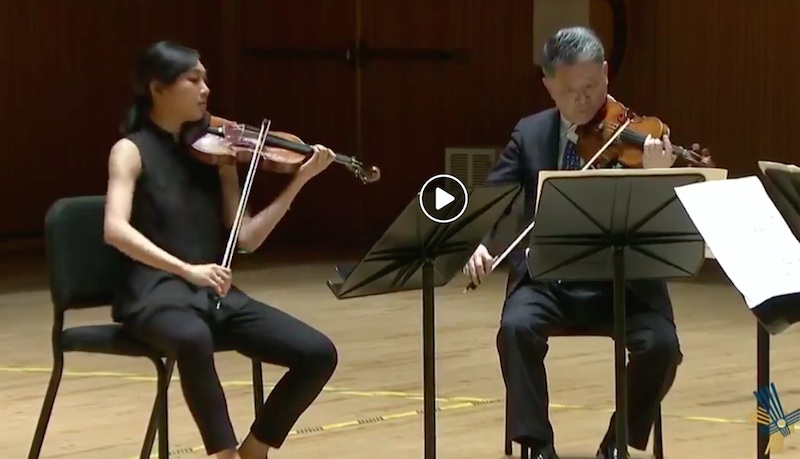 Nancy Zhou and Shanghai String Quartet member Yi-Wen Jiang in the semi-finals of the 2018 SISIVC.

Starting off the second session in the afternoon was Quanshuai Li of China, who had a special clarity to his sound. He seemed a bit deferential to the other members in the beginning but then led an exciting ending to the movement. Jiayi Chen of China was very animated and had excellent stage presence. Her violin had a darker color in its sound, which was sometimes a bit contained. Sophia Su of the United States sometimes edged forward with her tempos, with fast passages dispatched readily. Slower sections had a slightly Romantic flavor, still well within proper style for Haydn. A nice sense of musicality emerged as Yige Chen of China warmed up as he went along. He created some special moments, leading the group into an effective slow-down or a decrescendo. Yurina Arai of Japan played accurately and with good sound. A nice sense of ebb and flow came from Yun Tang of China's performance. Her sound was very clear and well-articulated, with individual notes popping out when needed. She also exuded a sense of being happy to be onstage.

Semi-finals will continue Sunday and Monday, with competitors playing a sonata and Kreisler piece; then resume Thursday and Friday with Mozart Concerto No. 5 performances with original cadenzas. Six finalists will be named on Friday. Check the Violinist.com Facebook page tomorrow for the live feed, and find more blogs here on Violinist.com!

On Saturday, the Shanghai competition announced that Augustin Dumay would not be able to continue as a member the jury, due to medical advice after a minor injury suffered from a fall on Friday. Replacing him for the semi-finals is Guillaume Molko, concertmaster of Shanghai Symphony Orchestra. An announcement is pending, regarding who will replace Dumay during final round, which involves performances with the Shanghai Symphony Orchestra.