The quarter-finals, which began Friday, will continue tonight, Monday and Tuesday. To watch the current and previous live-feeds, check the Violinist.com Facebook page each day (click here). Semi-finalists will be announced Tuesday (night in Shanghai, early morning in the U.S.) 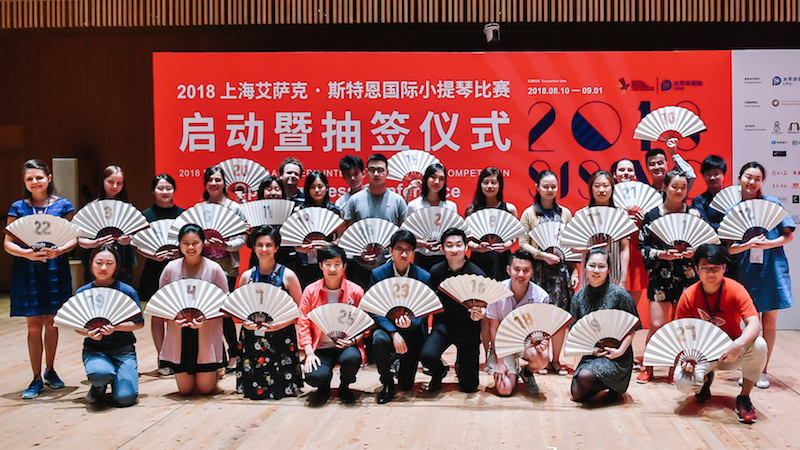 Quarter-finalists in the Shanghai Isaac Stern International VIolin Competition include 27 violinists from 11 countries and regions.

Later this week I'll be traveling to China to write about the competition on Violinist.com, as I did two years ago for the inaugural competition in 2016. The competition was named after violinist Isaac Stern, whose 1979 visit to China was a great source of hope and inspiration for violinists and musicians in China, following that country's "Cultural Revolution," during which western music had been banned. While I was there last time, I learned much more about what that meant for Western music during this period when I interviewed violinist Vera Tsu Weiling. She described practicing the violin a dark basement, using sheets of music copied out in pencil; learning in an environment of constant fear of being discovered and gravely punished. Weiling is now one of China's leading violin professors and co-chair of the jury for this year's Shanghai competition. (You can also read that interview in our latest book, Violinist.com Interviews, Vol. 2.)

I also learned more about why Stern's legacy was so important to those in Shanghai, both from Weiling and also from these young violinists from all over the world (click here to see all names) as well as a jury well-known leaders the the field (see below), all in Shanghai's modern symphony hall that opened in 2014, is a sign of progress to those who want to see this music thrive all over the world.

Six finalists will be announced Aug. 24, after semi-final rounds Aug. 18-20 during which participants will perform a Haydn quartet movement with the Shanghai Quartet; a sonata and a Fritz Kreisler piece; followed by a further semi-final round Aug. 23-24, during which they must each perform Mozart Concerto No. 5, with cadenzas they have written themselves. The final rounds, Aug. 30 through Sept. 1, require the performance of a work written by Chinese composer Qigang Chen, "La joie de la souffrance," as well as a major violin concerto (Tchaikovsky, Brahms, Mendelssohn, Beethoven, Glazunov, Prokofiev 1, Dvorak or Bernstein Serenade). Winners will be announced Sept. 1.