August 3, 2018, 1:03 PM · Welcome to "For the Record," Violinist.com's weekly roundup of new releases of recordings by violinists, violists, cellists and other classical musicians. We hope it helps you keep track of your favorite artists, as well as find some new ones to add to your listening! 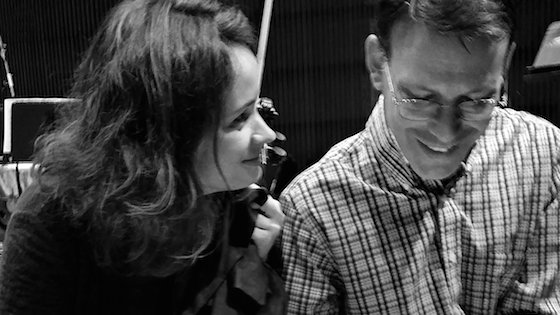 Violinist Patricia Kopatchinskaja performs Michael Hersch's "Violin Concerto" with the International Contemporary Ensemble (ICE) in a recording that also includes Hersch's "End Stages," performed by the Orpheus Chamber Orchestra. According to violinist Kopatchinskaja, for whom the Violin Concerto was written, the formidably difficult work is as raw as an "an open wound." She said the music "moves me so deeply, makes me speechless, tolerates neither doubt nor objection. It is like a mountain one can’t ignore....Everything is crystal clear, there is no decoration, no superficial beauty, no compromises. Everything is exactly in place, has found its perfect form." Kopatchinskaja premiered the concerto in Saint Paul, Minnesota then gave its West Coast premiere at the 2018 Ojai Music Festival, where Kopatchinskaja was Music Director and Hersch was composer-in-residence. BELOW: Patricia Kopatchinskaja performs Michael Hersch's Violin Concerto (first movement) at the Lucerne Festival.

Violinist Mario Hossen plays rare and unpublished works by Nicolo Paganini, completing a project to record the great violinist's entire output. Among the pieces on the recording are: Sonata Napoleon MS. 5; Maestosa Sonata Sentimentale MS. 51; Sonata movimento perpetuo M.S 66; and La Primavera MS. 73, all performed following Paganini's original manuscripts. It also includes the Concerto No. 3 and a version of Caprice No. 24 with piano accompaniment. Hossen's musicological and artistic endeavors are focused among other things on source research on Niccolo Paganini. Mario Hossen plays a violin by Giovanni Battista Guadagnini, 1749, on loan from the Austrian National Bank collection. BELOW: Mario Hossen performs an excerpt from Paganini's "Maestosa Sonata Sentimentale M.S. 51."

From the album notes: "Robin Holloway (b. 1943) is renowned as a composer, essayist and teacher. A chorister at St. Paul's Cathedral, he subsequently took private lessons with Alexander Goehr while studying initially English and then Music at Cambridge. His doctoral thesis at Oxford became the book Debussy and Wagner. Returning to lecture at Cambridge, he was later appointed Professor of Composition before retiring in 2011. His many students include Judith Weir, Huw Watkins, Thomas Ades, George Benjamin, Peter Seabourne, and David Collins. Holloway's early works were complex and modernist. What followed, namely his "Scenes from Schumann," caused much controversy for its radical reengagement with Romanticism, both in gesture and use of tonality. His mature style could be said to forge a path between the two, with excursions more fully into each. This refusal to be constrained is a feature of his musical thinking. On this release we hear two trios and a sonata, performed by the Rest Ensemble. BELOW: Interview with Robin Holloway at age 75, who talks about his life and about this new recording.