July 27, 2018, 5:04 PM · When I returned to Los Angeles from the Aspen Music Festival last week, I was somewhat surprised to learn that the featured violinist at the Hollywood Bowl on Tuesday was Augustin Hadelich, playing the Sibelius Concerto.

Didn't I just see Hadelich play the Ligeti Violin Concerto in Aspen? Didn't he then play the Mendelssohn concerto days after?

How on Earth does he do this? Incidentally, Hadelich went on to perform the Barber Concerto on Thursday at the Colorado Music Festival in Boulder. Four concertos, in one week!

Certainly few mortals can keep up with Hadelich, but I did at least go see him play the Sibelius Tuesday at the Hollywood Bowl with the LA Phil and conductor Stéphane Denève. This evening happened to come after a day in which temperatures in Los Angeles soared past 100 degrees, with everyone hunkering inside, as close to an AC vent as possible all day. Of course, Hadelich and members of the LA Phil did not get to do so -- they held their dress rehearsal outdoors, in the heat of the day! 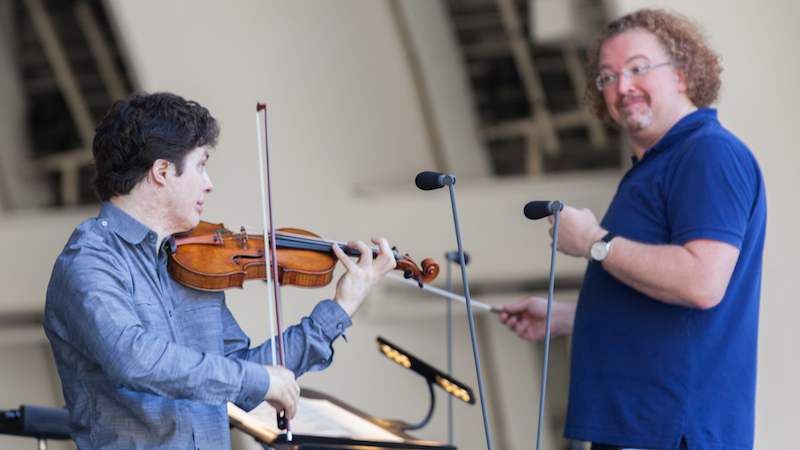 Violinist Augustin Hadelich and Stéphane Denève rehearse at the Hollywood Bowl with the LA Phil on Tuesday. Photo by Suxiao Yang, with permission from Los Angeles Philharmonic/Hollywood Bowl.

The evening was a welcome contrast, the air rapidly cooling on the hillside where the Hollywood Bowl sits. The concert began with the LA Phil playing Sibelius's "Valse Triste." A bird glided overhead, the flags on either side of the stage waved gently and a waxing moon hung in the early evening sky, and somehow the soothing, lilting nature of this music was the perfect mood-setter for the Sibelius Concerto. (The occasional interruption from a helicopter notwithstanding.)

The Sibelius Concerto starts with stillness and grows from there, and Hadelich conveyed that quiet opening in a way that drew together the far-flung audience members in this enormous venue. 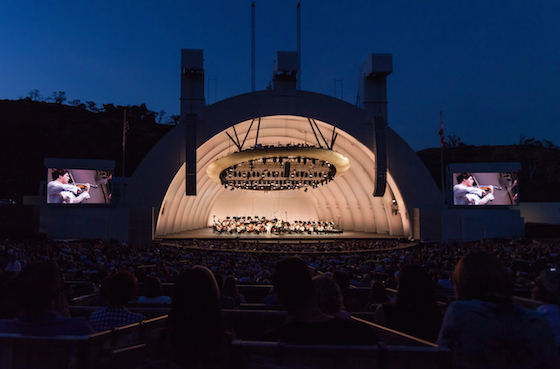 With Hadelich, everything is placed just so, and a thicket of notes becomes something clear, with the musical idea emerging in an obvious, seemingly inevitable way. The end of the first movement drew enthusiastic applause from the audience, which in LA seldom hesitates to clap between movements, God love us all. As a well-trained classical musician I know better of course, yet there I was, absent-mindedly clapping like crazy. It felt impossible not to.

The second movement showed off some of the LA Phil's fine woodwind playing (from clarinetist Burt Hara, flutist Catherine Ransom Karoly and others). In parts of this movement there is such thick orchestration, and yet Hadelich placed things so precisely that I realized how seldom I've actually heard every note fall so well into place in this piece. The last movement was a wild, catchy and satisfying ride on Sibelius's lopsided roller coaster.

For an encore Hadelich played the 21st Caprice by Paganini, emphasizing the nuance and the music over the pyrotechnics while still giving us plenty of breathtaking virtuosity, for example: some wicked-impressive flying staccato.

Loving this "Monument" for Violin and Orchestra (Violin Concerto), from the text of Laurie's review of Augustin Hadelich and the LA Philharmonic Tuesday performance at the (yes) famed

humongous Hollywood Bowl, I noted the 2 Huge Screens on either side of the Football Field

sized stage featuring the violin soloist! If one must stare at a huge screen (hardening back to the LA Drive-In Movies Era of the 1950's & 60's, this violinist wonders how the amplified sound affected the actual onstage performance?? (& not to mention such excessive heat!) ??

To be sure, Augustin Hadelich is carrying at least 4 but I'll guess 8 major Violin Concerti per concert season, which is par for the course of any major touring concert artist ~ The rigour's of concert touring life are well known amongst those who have done this and are doing so now! I

know that one must have the Brahms, Beethoven, Mendelssohn & (now) the Sibelius in one's

front pocket plus the Tchaikovsky & possibly Korngold within the past 15 years for important international soloist with orchestra bookings!! The other possible "Must Have" would now be the Shostakovich Violin Concerto No. 1 in a minor, Op 99!!! I can attest to both my Master Mentor's, Jascha Heifetz and Nathan Milstein, carrying at least 15 to 20 major Violin Concerti & pieces (i.e., Chausson's Poeme, Ravel's Tzigane & Saint Saen's Introduction & Rondo Capriccioso) in concert form whilst on tour per season, and easily so!! Even a Ready to Play Repertoire List of 12 Violin Concerti was preferred when this contributor was touring full time!!

The point I guess one is attempting to make, is the old adage, "Less is More"!!! It seems to me

the quality and complete immersion of violinist & violin-self, is the most important of any concert artist's 'Mantra' ~

If I may, and with all due respect to Laurie Niles' vivid critique-narrative of Hadelich's Sibelius, it is a near 'War Dance' 3rd movement 'Allegro ma non tanto' score of Sibelius' genius creation & challenge for whomever attempting to climb Jean Sibelius' deliberate Violin Mountain finale!! I

know, from the (horse's) aka, Heifetz' synced lips, that 'no one should really try playing the Sibelius' then finger pointing to himself with gleaming eyes!! This profound unusually expressed

advice to the 7 of us - original pupil's of Jascha Heifetz's 1st International USC Violin Master Class, was revelatory in the sense of the humbled person of Jascha Heifetz (most don't know)

was in such musical - technical wondrous respect of Sibelius' Violin Concerto, & shortly after his second timed recording of the Masterpiece, with the Chicago Symphony Orchestra/Walter Hendl conducting (Reiner was taken ill just prior to the recording here in Chicago), saying this!!!

Stilled to utter silence upon hearing and seeing Mr. Heifetz's proclamation in Class, it seemed all were astonished because we had all heard Mr. Heifetz's 'other world' non stop performed Sibelius recorded as it was on the 1960 recording w/ the Chicago Symphony Orchestra/Hendl conducting, which we knew as does the World of Concert Violin know, set the Bar so High for the Standard of Sibelius Mastery, few would dare walk onstage to try!!! Tbc ~

July 29, 2018 at 10:18 PM · Always heard of the Hollywood Bowl, never saw a picture of it until this article, so thanks for the pic AND the review giving insight into the demands placed on a touring violin soloist. The Sibelius concerto has always been one of my favorites.

Here on the east coast a venue somewhat comparable might be Tanglewood in western Massachusetts, complete with very large screens and, of course amplifiers, with a similar open-faced shed for the musicians (and some premium seats). Probably Hollywood Bowl doesn't have a large area of lawn for picknickers, which makes for enjoyable group outings, but ultimately for classical music I prefer fine concert halls with good acoustics and no amplifiers.

July 30, 2018 at 04:07 AM · This was a fabulous concert (hi Laurie, my family was sitting in section G1 not too far behind you!). We also brought a few of our private students with us, as some of them have never made it up to LA to hear the Phil yet.

The Hollywood Bowl actually has tons of space for all kinds of concert-goers, from the fancy tables/chairs up front with catering, the semi-private boxes behind them, the nice standard rows of chairs behind those, and then further up a large lawn seating for picnickers. Once one gets past the standard rows of chairs, the secondary amplification system kicks in (more on that later).

After a somewhat tepid performance the previous week with a clearly unprepared conductor and questionable amplification, this Tuesday concert with Hadelich was a breath of fresh air. The LA Phil shone in the orchestral works of Sibelius and Ravel, and Hadelich and Deneve had remarkable communication throughout the concerto. The sound engineers in the booth accomplished that rare balance of preserving the quality of the sound of the soloist and orchestra while amplifying it to fill the entire venue. For a venue of this size (capacity ~17,500), there's no reasonable way for anyone sitting all the way in the back to hear what's on stage so the speaker system has been designed to provide amplification without wrecking the original source completely. The colossal dynamic range of ensemble colors of the orchestra were demonstrated fully in this program, and we were thrilled with the concert.

It's not the Walt Disney Concert Hall, but for warm summer evenings I enjoy hauling my basket up the hill filled with goodies to enjoy the programs. And it's easier to find a place to sit than the scant lawn area around the Aspen Music Festival tent. :) Lots of wonderful concerts every night there too though, if one has time to get out to Colorado! Hadelich was there the previous night performing Ligeti...these soloists have chops of steel. To fly in that day and deliver such a polished, expressive, performance!