July 22, 2018, 3:38 PM · "I got the last ticket!" said a young man excitedly as he and his friends scurried downstairs into the Aspen Music Festival's subterranean Harris Concert Hall for a recital Wednesday night by violinist Augustin Hadelich.

One might not think that an 8:30 p.m. concert featuring challenging contemporary works by György Ligeti, Toru Takemitsu, Francisco Coll and Stephen Hartke would be such a hot-ticket item, filling this 500-seat venue to capacity. (Add to this the fact that the same evening, a 6:30 p.m. concert at the tent next door featured ever-popular and easier-to-listen-to works such as Stravinsky's "Firebird," and Saint-Saen's Violin Concerto No. 3.)

But the concert hall was packed with enthusiastic students, teachers and music fans, and the reason is not difficult to fathom: a chance to see one of the most accomplished violinists of our age, Augustin Hadelich, push the boundaries of violin-playing to the far reaches of anyone's abilities or imagination. Particularly of interest was his performance of the Ligeti Violin Concerto, featuring a new cadenza by Thomas Adés (read more in our interview with Hadelich several days before). 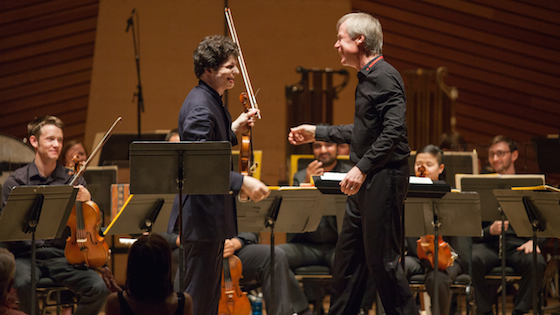 All week people had been listening in on rehearsals, and the buzz was good. Earlier that day I heard violin professor Paul Kantor urge a student to attend, adding, "This will re-define your entire concept of what is difficult on the violin!"

Frankly, the entire program was fascinating, featuring not just Hadelich but also pianist Conor Hanick; plus students in the Aspen Contemporary Ensemble; and the Aspen Festival Ensemble, conducted by David Robertson.

The concert opened with Hadelich alone, starting from near-silence -- an incredible, arresting quiet -- at the beginning of "Hyperlude V," from Francisco Coll's 2014 series for solo violin, "Hyperludes." The piece grew, with chords, exciting vibrato, harmonics -- then it waned again, with Hadelich somehow able to draw this entire hall full of people into utter silence and stillness, even well after he stopped playing.

For the second piece Hadelich was joined by pianist Hanick for American composer Stephen Hartke's wildly creative "Netsuke," written in 2011. Its six movements were inspired by six "netsuke," Japanese miniature sculptures from the Los Angeles County Museum of Art. One of the most novel movements was the third, "Tanuki playing the samisen," in which Hadelich explored a range of pizzicato techniques (from a normal pizz to the twangy "Bartok" pizz to something that seemed to involve more fingernail) while the pianist actually struck the inside of the piano using the handle of a bass drum mallet, creating an echo-ey "plunk." 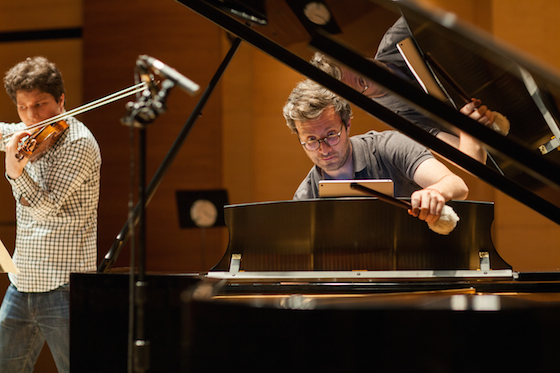 This certainly had the effect of sounding like another instrument. Almost humorous was the fourth movement "Baku, the monster that devours nightmares," which alternated between almost "chopping" effects in the violin, and high squeals of glissandi. The fifth movement indeed evoked its inspiration "Demons carrying a rich man to hell" -- with a low drumbeat march in the piano growing in volume and speed, even getting a little jazzy, as the party reached its destination -- the ending of this movement was absolutely masterful in its precision-timing. After the grand and shimmery "Jewel of Wisdom with mountain pavilions" movement, composer Stephen Hartke, who was in the audience, joined both musicians onstage for an enthusiastic reception from the audience. 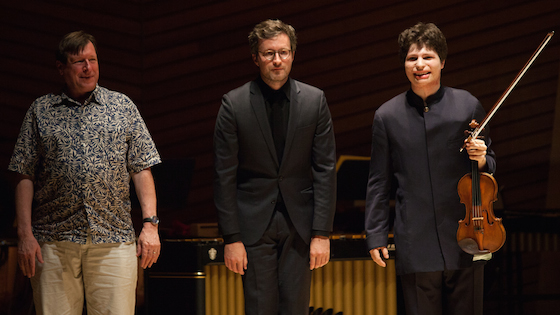 By the evening's new-music standards, Takemitsu's 1978 "Water Ways," performed by eight students from the Aspen Contemporary Ensemble, was an old standard. The physical set-up for the performance was attractive and symmetrical, with a lid-less piano facing forward in the center, flanked by two vibraphones and framed by two harps, one on either side. A violinist, cellist and clarinetist took the space in front of the vibraphones. It's a ghostly, spooky piece that unfolds at the pace of perhaps a very tentative walk through a haunted forest. There is a pulse, but the overall feel is static and dreamy, becoming almost hypnotic and peaceful toward the end before it disintegrates harmonically and moves into stillness.

The evening culminated in Hadelich's performance of Ligeti's Violin Concerto, composed in 1992, with with the Aspen Festival Orchestra, conducted by David Robertson. This performance featured the Adés cadenza, which Hadelich first premiered in January 2018, with the composer conducting the Boston Symphony. As Hadelich said of the piece several days before the performance, "there's nothing else like it....everyone should hear this piece, at least once!"

It's not easy listening, but it engages the imagination. The first movement opened with the soloist playing rapid alternation of open strings, then adding some dissonant notes and harmonics, then adding bursts from the soloist, underlined by marimba. The second movement had the solo violin in a lyrical, melodic role: one person singing against a background that was sometimes consonant and other times in loud opposition. The violin part changed to very rapid repeated notes, to almost neurotic effect. A choir of ocarinas joined, adding a very different character to the orchestra. (Don't tell anyone but the dissonant flute-like clash made me imagine a group of earnest beginners in an elementary school recorder class!) The lyrical violin returned, now in double stops, and I was impressed by a well-played low-register flute solo as the movement waned.

The "Intermezzo" that followed was high and urgent in the solo violin, with the whole orchestra then crescendoing in a flurry of anxiety. The "Passacaglia" that followed started with calmer waters but then had quite a lot of rather piercing static, reminding me of an alarm for an electronic device. The whole movement ended in a high, piercing shimmer.

The final movement recalled the beginning, with bursts, gestures and paroxysms from the solo violin. At this point my imagination took over and I just heard things as images: an alarm bell for the entire subway system, with everyone scampering away, followed by a unique clarinet solo, then Darth Vader walking in via the brass and the strings, afraid, shaking in their boots. The violin played a soft lament recalling the second movement, but then chaos grew. The ocarinas flew overhead...and then the cadenza.

The cadenza grew organically, becoming impossibly fast at times, with chords and tremolo, wild technical tricks and arpeggiated figures that jumped frenetically all over the fingerboard. Hadelich negotiated it with incredible agility, a broken bow hair waving from the tip of his bow for the entire ride. With so much activity, change, and technical wizardry, it could have sounded like so many notes, yet Hadelich also brought a musical sensitivity that created context. The cadenza segued straight into a quirky and very short ending to the entire piece, after which came an immediate and universal standing ovation from the audience. Even the notoriously critical Juilliard violin professor Sylvia Rosenberg, sitting at the end of my row, stood. Hadelich returned to the stage numerous times (I lost count) as the applause persisted.

For an encore, Hadelich played the "Sarabande" from Bach's Partita No. 2 for solo violin. Somehow after the thorny and dissonant music of Ligeti, the beauty and purity of this music -- of both Bach and of Hadelich's way of playing it -- felt like a cleanse. No one seemed to move or breathe, and the music flowed as inevitably as water. What an artist.