Interview in Aspen with Augustin Hadelich: the Ligeti Violin Concerto

July 17, 2018, 12:25 PM · ASPEN, Colo. -- During the last few days I've been visiting Aspen, a place where many musicians have spent their summers studying, performing and teaching. In the winter the main attraction is skiing, but in the summer, it's classical music, in the form of Aspen Music Festival, which was founded in 1949.

What this means is that during the summer, this small ski resort town suddenly bursts with a population of classical music lovers and musicians. Music is everywhere. There are newspaper reviews of classical concerts every day, and copies of the festival schedule lying around everywhere. Yesterday I encountered a college-age couple talking over coffee about the merits of various violin players, while at the next table sat young man who sang a lead part in a performance of Rossini's "Barber of Seville," which I'd seen on Saturday. And there are also things like a bluegrass festival atop the mountain -- you have to ride a gondola up to see it.

It's that kind of place -- just walking down the streets, you might run into any number of people who are celebrities in our classical music world -- this summer you might pass artists such as Augustin Hadelich, Daniel Hope, Midori, Sarah Chang, Gil Shaham. Or you just might bump into one of the world's finest violin or viola teachers such as Paul Kantor, Robert Lipsett, Sylvia Rosenberg, Almita Vamos, Bing Wang, Masao Kawasaki -- the list goes on and on.

Over a period eight weeks, the Aspen Music Festival attracts a staggering number of top-flight musicians, playing host to more than 130 artists and faculty members who represent nearly every major conservatory, music school, and orchestra in the United States. During that period, more than 600 young musicians between the ages of 10 and 37 study at the Aspen Music School, from about 40 states and 40 countries. And there are some 300 performances, master classes, lectures, and panels, many of them open to the public as well as the students.

It's actually a little overwhelming.

I'm fortunate enough to be here while several violinists are visiting, including Grammy award-winning Augustin Hadelich, who is giving a recital Wednesday night, playing the highly unusual Violin Concerto by György Ligeti -- a piece that I must admit, I have never heard -- but I will! A few days later, on Sunday, Hadelich will perform the Mendelssohn Violin Concerto in a 4 p.m. concert with the the Aspen Festival Orchestra. 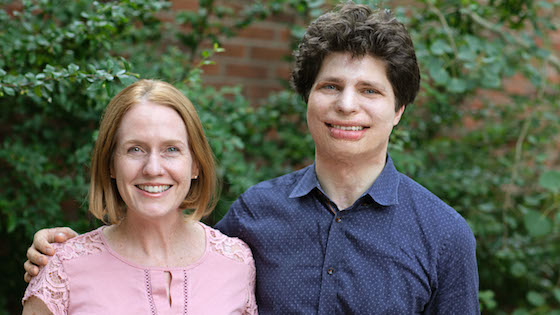 On Monday I spoke with Augustin about Aspen and about this unique and interesting concerto, for which he has become a champion. The Ligeti concerto, written in 1992, requires several of the orchestra players to tune their instruments to unconventional pitches ("scordatura" tuning, but to microtonal pitches), while the soloist tunes to conventional pitches. The music also requires four wind players to play the ocarina, an ancient kind of clay flute. At Aspen Hadelich will play a new cadenza by Thomas Adés, which he first premiered in January with the composer conducting the Boston Symphony (a performance that received glowing reviews).

Laurie: Tell me about the first time you played at Aspen, and what your impressions were then and now.

Augustin: Aspen is a very beautiful place, first of all. The first time I came to Aspen was in 2011, to play a performance with Julia Fischer of double concertos -- the Bach Double Concerto and the Schnittke Concerto Grosso No. 1, which is also a wonderful double concerto. It was unforgettable, it was one of my favorite performances that year.

One thing that is special in Aspen is the students and their enthusiasm. The Festival Orchestra, for example, is composed of students, and the principals are faculty, well-respected orchestral musicians and teachers who teach here in the summer. With so many young people playing, there is a kind of special spark, a freshness and a joy when they are playing some of this music for the first time.

Laurie: I bet the Ligeti will be a first-time performance for many of them!

Augustin: I'm sure. That piece doesn't come around so often!

This is an unusual piece because it has a very small orchestration for the strings, just a handful of string players. The concertmaster and the principal viola have solo parts which are played in a microtonal scordatura - so the concertmaster tunes a little flatter than a half-step higher, and the violist tunes a little bit more than a half-step down. They take the pitches from harmonics of the bass. It's based on the overtone scale, where certain notes are flat. So some of the the intervals that are created sound strangely consonant because it's based on physics. What's incredibly hard for them is that they have to play on these instruments that are tuned "wrong" - without adjusting. Everything they hear from me and from the others is at normal pitches.

Laurie: So you're not scordatura.

Augustin: I'm not scordatura. Occasionally I have certain notes that have to be in tune with the scordatura instruments, and those notes are marked.

Laurie: How do you make it so it doesn't sound simply out of tune?

Augustin: Well, this is a challenge with much new music, but when it's well-tuned and when everything aligns perfectly and falls into place, it actually makes a lot of sense.

Music by Ligeti is very, very complex, and music that is complex, different and new, can sound like cacophony when it's out-of-tune and not together. Ligeti especially wrote music that is very, very complicated rhythmically. Often there are three or four things going on at the same time, in different meters. Not in different tempi, but one person is counting 4/4, the other person is counting 3/4 -- people are doing completely separate things, but it all fits together. It aligns in a way that is beautiful because you can sense, when you listen to it, that it has to be just this way and that there is some kind of order to it.

Of course, it takes very little to turn that order into chaos! 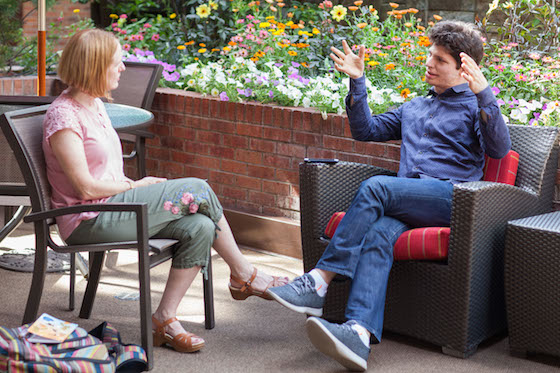 Laurie: What made you fall in love with a piece like this? Because it sounds very difficult, both to play and interpret.

Augustin: I first heard it in 2003, when I was a student. I heard a recording that Frank Peter Zimmermann had made, an extremely good recording in which they did a wonderful job, working out these details.

Ligeti went through different stylistic phases in his life, and by the time he got to the Violin Concerto, he had actually turned away a little bit from the avant garde. He still used some of the experimental techniques that he had developed, but now he wrote music that was very lyrical. There are many places in this piece that have traditional elements -- the second movement ends on a C major chord, for example. Ligeti kind of became an outcast among his former friends, who were avant guardists who didn't like that sort of thing.

It's almost a synthesis of everything Ligeti had done before in his life, all these styles coming together, and he wrote some of his most beautiful music during this period. Each one of the movements in the Violin Concerto is very beautiful and expressive. When I first heard it, I was really drawn to this music and to its lyricism.

The second movement is one of the main reasons why I really love this piece. All the great concertos have slow movements that somehow effect us emotionally, and I feel that very much in the second movement of this piece. It sounds a little bit like a medieval chant, with modal harmonies. Then this melancholic melody of the violin is interrupted by four ocarinas that are played by four of the wind players, who then play this theme. It sounds kind of like a lamentation.

There are great places in the other movements as well. The way the piece starts is quite amazing, alternating open A and D strings, very fast. The whole first movement is in perpetual motion, with harmonic glissandos and open strings. The concertmaster and principal violist are tuned microtonally differently, and as they join in, it creates an ethereal, almost shimmering effect.

In the last movement there is a bit of Hungarian folk music -- it gets a little folksy at the end.

It's a crazy piece, but there's nothing else like it. And it's certainly the opposite of a boring piece, it's unbelievably exciting. Everyone should hear this piece, at least once!

Laurie: Tell me about the new Thomas Adès cadenza that you'll be playing. Where is it in the piece, and how did you come to play this one?

Augustin: It's right at the end of the piece. After the cadenza, the orchestra plays about four more bars -- they come in and finish the piece. Adés wrote this because Ligeti did not write his own cadenza. Ligeti wrote this concerto for a violinist named Saschko Gawriloff, who wrote the cadenza. It's a pretty good cadenza, but when you finish this very virtuosic cadenza, the orchestra comes in and the piece ends quite suddenly. It feels a little bit like, "What just happened?" Thomas Adès took on this challenge. He loves the piece -- he studied it a lot and his own concerto was influenced by it. I even got to (premiere the cadenza), with him conducting recently in Boston.

Also, Adés really writes the cadenza in Ligeti's style. Just looking at it, you would think that it was written by Ligeti, it's just completely in the style of the piece.

Laurie: Is it a lot different from the original cadenza?

Augustin: It's very different. The other one is a little more violinistic, it lies better. In fact, the Gawriloff cadenza is by far the easiest part of the piece, if you play that cadenza. It's written by a violinist, lies well on the violin. But sometimes it doesn't make a lot of sense.

The Adès cadenza, it's really difficult. If you play the Adès cadenza then that's definitely the hardest part of the piece! But Adès basically composed it by taking all the themes and elements of the whole piece, which was Ligeti's instruction. At the end of the score Ligeti writes how he wants the cadenza to be: the idea is that the themes all come back and it just gets more and more and more frantic until the end.

Laurie: Are you planning to record the Ligeti?

Augustin: I am recording it in the fall, so next year there's going to be a recording of the Brahms and Ligeti concertos together, with the Norwegian Radio Orchestra and Miguel Harth-Bedoya.

Laurie: You are also playing Mendelssohn later in the week -- a very different from the Ligeti, and much more familiar to most people.

Augustin: When I go back to Mendelssohn after doing something like the Ligeti, there's something refreshing about its simple beauty. Somehow the contrast keeps it very fresh for me.

Here is Hadelich performing the Adès cadenza for the Ligeti concerto:

July 21, 2018 at 04:34 AM · Laurie, thanks for the interview. It really made me anxious to hear the concerto. And Katarina, thanks for the youtube link. I think I heard some folk music in the cadenza at one point.

The Aspen Festival is always in my consciousness because my luthier is the festival luthier. This summer I heard there was a wildfire near Aspen. I hope the festival wasn't in jeopardy because of it.

July 21, 2018 at 05:58 PM · Hi Francesca, the wildfire was in Basalt, which is reasonably far from Aspen, though close enough that you could smell the smoke. Of concern, though, is the fact that Aspen Music Festival president Alan Fletcher was evacuated from his home for a while! I believe the home is okay, though.