July 9, 2018, 11:19 AM · Rachel Barton Pine is determined to make it easier for performers, conductors, and concert programmers to find the music of black composers, and today her foundation launched a free online directory of living black composers called the Music By Black Composers: Living Composers Directory (click here).

The directory is part of the Music By Black Composers (MBC) project, an initiative developed by the Rachel Barton Pine Foundation that aims to bring greater diversity to the ranks of classical music performers, composers, and audiences by making the music of black composers easily available to all.

The directory is meant to be a perpetual work-in-progress, inviting the public to continually ad to the list, which currently contains the names of 170 living black composers from North and South America, the Caribbean, Europe, Africa, and Asia. (New names can be proposed by e-mailing Megan E. Hill, Ph.D., Managing Editor for MBC, who is an Adjunct Professor of Ethnomusicology at the University of Michigan. 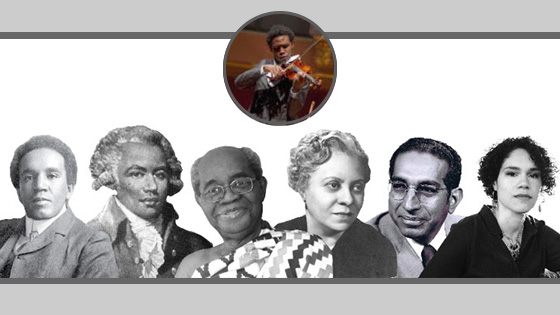 "Composers of African descent have created masterful classical music for centuries, yet they continue to be underrepresented in concert programming and in classical music education. This absence silences a rich vein of works from global consciousness and obscures the true face of classical music," Rachel Barton Pine said. "Young musicians seldom have the opportunity to study and perform classical music by black composers. It’s a struggle for artists and enthusiasts of color to participate in an art form in which they do not appear to belong, perpetuating a lack of diversity on stage and among audiences. This online directory is one of the ways the Rachel Barton Pine Foundation is working to spread awareness of and access to music by black composers."

This directory is just one part of the Music by Black Composers project. In the works are several other projects, including the publication of series of violin books; a comprehensive online database of all composers of African descent, living and deceased; as well as the publication of a pedagogical series of books of music exclusively by black classical composers from around the world, for a variety of orchestral instruments.

The first book in the violin series is expected in October 2018, called MBC Violin Volume I and published by LudwigMasters. The books will be graded by difficulty from beginner to advanced concerto-level playing and will include biographies for every composer, profiles of black classical music role models, and feature articles about black participation in classical music past and present.

The comprehensive database is being developed by the RBP Foundation, in collaboration with the Orchestral Music by Black Composers (OMBC) project, founded by scholar-harpist Dr. Ashley Jackson and conductor James Blachly. That database will feature information about numerous individual works for solo instruments, chamber ensembles, and orchestra, including instrumentation, length, descriptions, difficulty level, where to find the music, links to recordings, and programming suggestions.

Subsequent publications will include works for school orchestra and chamber ensembles. In addition, MBC is also developing a coloring book of the 40 most prominent Black composers throughout history as well as a timeline poster featuring more than 300 Black composers.

The idea for MBC started began for Rachel Barton Pine with her 1997 recording Violin Concertos by Black Composers of the 18th and 19th Centuries, an album containing compositions by Afro-Caribbean and Afro-European composers from the Classical and Romantic eras. After its release Pine found herself sitting on diversity panels and fielding questions from students, parents, teachers, and colleagues about where to find more works by Black composers. She quickly discovered that most repertoire by Black composers is out of print or only exists in manuscript. So, in 2001, her not-for-profit Rachel Barton Pine (RBP) Foundation committed to the Music by Black Composers (MBC) project. Over the past two decades, MBC has uncovered 900+ works by more than 300 Black composers from North and South America, the Caribbean, Europe, Africa, and Asia, from the 18th to the 21st centuries.