December 21, 2018, 2:29 PM · Welcome to "For the Record," Violinist.com's weekly roundup of new releases of recordings by violinists, violists, cellists and other classical musicians. We hope it helps you keep track of your favorite artists, as well as find some new ones to add to your listening! 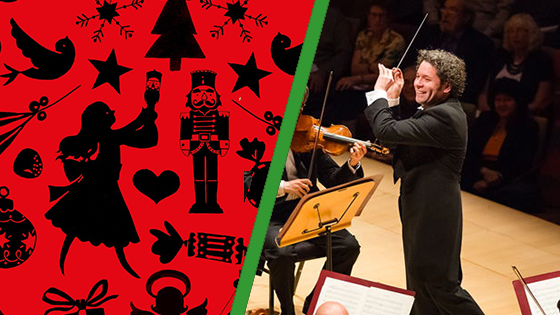 Here is something for your holiday listening: a newly-released recording of the full Nutcracker Ballet, which was recorded live at Walt Disney Concert Hall in 2013. I can't really say it better than this review from Scott Freije on Amazon: "This is an important recording to document one of the most extraordinary things in classical music today - Dudamel’s partnership with the LA Philharmonic. Those of us here in LA have seen Dudamel mature from a conducting wunderkind to a deep musical force breathing fresh life not just in LA but Venezuela and the most established musical institutions in Europe. This recording has everything you would want from Tchaikovsky’s famous ballet, all the big tunes are given a full bodied performance from an engaged virtuosic orchestra aided with the glorious acoustic of their famous hall in a live recording. This is the full score, not the truncated suite most often heard. Dudamel treats this as serious orchestral music, not a facile series of pleasant melodies." BELOW: Waltz of the Snowflakes, featuring the LA Children's Chorus.

The Neave Trio performs arrangements by one of Piazzolla’s long time colleagues, José Bragato (Las Cuatro Estaciones Porteñas) and by a younger protégé, Leonardo Suárez Paz (select songs). Mezzo-soprano Carla Jablonski joins the trio for the Piazzolla songs as well as an original work by Paz. Piazzolla’s original score for Las Cuatro Estaciones Porteñas matched his quintet: bandoneón, piano, guitar, bass, and violin. José Bragato, who worked with Piazzolla for many years and arranged many of his works, created this version for piano trio. In the tradition of tango spontaneity and flexibility, he takes liberties with textures, ornamentation, and other details of Piazzolla’s themes. "Bragato’s wonderful arrangement provided a great canvas for us to improvise, adding colors and timbres," said violinist Anna Williams. "All three of us wear many musical hats, emulating other sounds and instruments. Sometimes we provide percussion. At times, we were inspired by the sounds of bandoneón, accordion, guitar, viola, and double bass." BELOW: Neave Trio performs Astor Piazzolla's "Otoño Porteño" (Autumn)

In this first volume of Mozart's duos, Isabelle Faust and Alexander Melnikov, performing on period instruments, revive the tradition of the sonata for keyboard with violin accompaniment. Born in the middle of the Age of Enlightenment, this rather unusual concept continued to thrive in the era of Viennese Classicism. Mozart swiftly sealed its fate by instigating (or, in a sense, restoring) an increasingly lively conversation between the two instruments.