December 19, 2018, 12:48 PM · After receiving a MacArthur fellowship in October, violinist Vijay Gupta has chosen to give up his position in the first violin section of the Los Angeles Philharmonic to focus his efforts on social justice work and his nonprofit Street Symphony.

Gupta's last concert as a full-time member of the LA Phil was Sunday, performing Brahms Symphony No. 2 with Zubin Mehta. 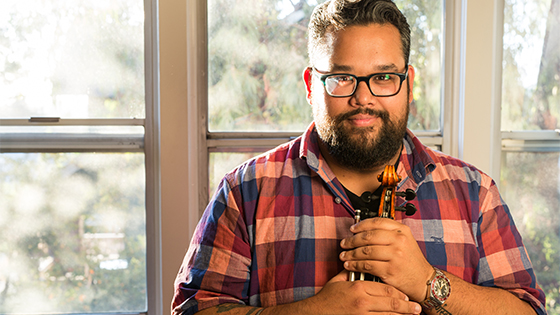 Gupta, 31, joined the Los Angeles Philharmonic in 2007 at the age of 19, becoming the orchestra's youngest member. His advocacy efforts began shortly after that, when he gave lessons to Nathaniel Ayers, the Juilliard-trained violinist whose spiral into mental illness and homelessness became the subject of a series of Los Angeles Times columns by Steve Lopez, which inspired a book, and then a movie called "The Soloist."

In 2011, Gupta co-founded the Street Symphony, which pools the talents of local musicians to provide live concerts at shelters, county jails, and treatment and transitional housing facilities. Every year the Street Symphony performs Handel’s "Messiah" on Skid Row in conjunction with a series of free community workshops that encourage residents to perform or create their own pieces.

Street Symphony is now planning to move into its first office in downtown LA, and Gupta told the LA Times he hopes to expand its fellows program, which pairs skid row musicians to study for up to a year with professional musicians. Gupta also plans to continue lecturing at the Juilliard School in New York and the Colburn School in Los Angeles.

December 20, 2018 at 11:55 AM · Playing in the LA Phil is obviously a huge commitment, there's probably no way he can do all that other stuff besides. But that's what the MacArthur Fellowship is for -- to allow him to free himself from his day job and explore his true dream.