October 29, 2018, 1:30 PM · In an effort to promote the coverage of live violin performance, Violinist.com each week presents links to reviews of notable concerts and recitals around the world. 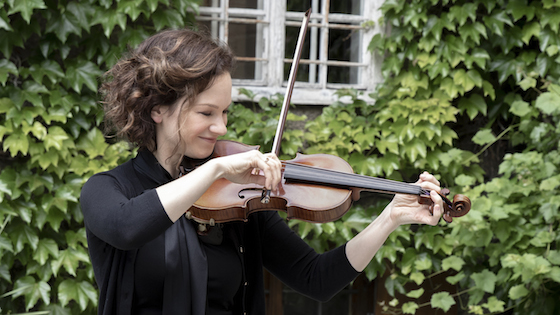 Hilary Hahn performed a recital of solo Bach at the Kennedy Center Terrace Theater in D.C.

October 30, 2018 at 02:34 PM · The Hahn concert in DC was wonderful, held in a small venue which was quite intimate. I had only one problem and that was her interpretation of the first movement of the Second Partita, which was definitely idiosyncratic. She held many of the notes longer than written or than one normally would, and I would not say that that really added much. One really nice thing she did at the end was to give a shoutout to her first teacher Klara Bercovich, who was in the audience.

Paul, Hilary Hahn studied with Jascha Brodsky, representative of the St. Petersburg Leopold Auer Idea on making Music, and Thank Gosh!!! She is on Musical Terra Firma, yet many H. H. contemporaries seem confused ~ As is stated in The Good Book ~ 'God is not the Author of Confusion.' With all said, I'm sincerely grateful that Hilary Hahn is true to Bach and all the composer's works she performs ... The main theme here is for second or third generation artists exposed to Violin Great's, Heifetz, Milstein, David Oistrakh, Kreisler, et al, stay truly close to Grand Tradition of The Master's yet step forward in their own generational fidel to beauty shoes ~

Whatever HIP is, I do not wish to know as one's strength is in & from 2 of those Icon's mentioned just above! How fortunate I feel ...

October 30, 2018 at 09:25 PM · HIP is historically informed practice, and it can mean a number of things, but in general it hearkens back to the way things were done in a given era, such as the Baroque era, with Baroque bows, gut strings, etc. This movement has been very inspiring to many people and produced some wonderful and fascinating performances of Baroque-era and Classical-era music. Violinist Rachel Podger is a proponent with some really wonderful insights, and her Vivaldi recordings with Brecon Baroque are wonderful. I've also enjoyed the highly creative performances by Tafelmusik as well as the Handel and Haydn Society. I am definitely one who would defend HIP. But I also very much enjoy Hilary's solo Bach. We don't all need to have the same approach, nor does one approach negate another, in my view!

October 31, 2018 at 07:58 PM · Well said Laurie. I think the ultimate test of an interpretation is how it works for you. HIP is fine and you can get insight from it, but, if it does not appeal to you, that's the test. I have listened to a number of period performances of the Bach S&Ps and still like Szeryng the best. However, I also like Lucy van Dael's on Naxos. As a relative of Wanda Landowska, the harpsichordist who basically popularized period performance, I feel that some aspects of HIP and period performance, such as use of the harpsichord where that is the keyboard instrument for which a piece was written, are particularly important. Indeed, even someone as non-HIP as Oistrakh was accompanied by a harpsichordist when he recorded the Bach sonatas for violin and continuo. As Wanda famously said to Casals when they were having an argument over how to play something Bach wrote: "That's fine dear. You play Bach your way and I will play Bach his way."