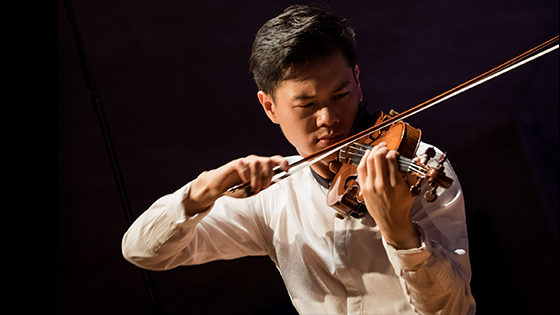 Here is the order for the six prize winners: 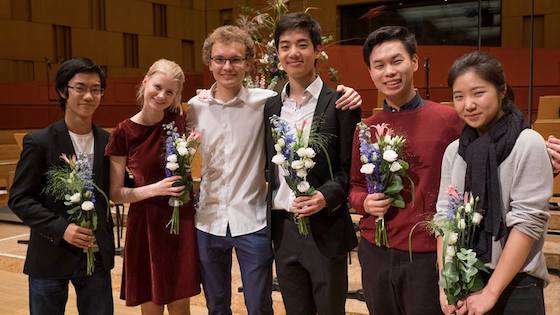 Chooi also will receive the opportunity to make a CD recording, as well as the three-year loan of a G.B. Guadagnini violin. All six winners will perform on Saturday at Prize Winners' Gala, during which prizes will be awarded and the two audience awards and the award for best interpretation of the commissioned work will be announced.

(BELOW: Timothy Chooi performs the Tchaikovsky Violin Concerto in the Finals of the Joachim Competition.)

Chooi was born in Victoria, British Columbia, Canada and started violin at the age of three with the Suzuki method at the Victoria Conservatory of Music with Esther Tsang. He then started studying at Mount Royal University Conservatory, and at age 16 he went to Philadelphia to study with Ida Kavafian at the Curtis Institute of Music, where he also studied with Pamela Frank. Currently enrolled at the Juilliard School, Chooi studies with Catherine Cho. Timothy frequently performs with his older brother, violinist Nikki Chooi, in a touring ensemble called The Chooi Brothers.

A veteran of the competition scene, Chooi also won First Prize and was the Audience Choice Winner in the 2018 Schadt String Competition. Last summer he was awarded the 2018 Verbier Festival Academy Prix Yves Paternot, for the "Most Accomplished Young Musician." He is also the Bronze Medal winner of New Zealand’s 2015 Michael Hill International Violin Competition and the Grand Prize winner of the 2010 Montreal Symphony Manulife Competition

October 27, 2018 at 06:19 PM · It’s funny, another well-known music-related website I won’t dignify by naming has a number of posts by the site’s editor railing about the corrupt jury there, and how one of the jury president’s students is sure to win again. I’m sure the fact that my comments gleefully pointing out Timothy’s win, as a competitor with no ties to the jury, being stuck in moderation is just a coincidence, right/? ??

Happy to say that I’ve never seen any evidence of such bias here!

October 28, 2018 at 01:40 PM · Congratulations to Timothy Chooi! Really talented violinist and musician, and super nice guy; great to see him have that recognition.

October 28, 2018 at 03:43 PM · congratulations to all winners!! aww fukuda got fourth. he is my favorite and until now i still hear his performance playing the Carmen fantasy by Waxman (i don't know but, i think he played the arrangement of Heifetz)

sorry for my bad English

October 28, 2018 at 11:52 PM · I also really like the conductor in the above video - how he has eye contact with the soloist, guides the orchestra to be exactly with him, and how he and the soloist create the music together.

October 29, 2018 at 05:42 PM · To 24.4.6.157 - It looks like there was indeed something fishy with the finalists selection since Krzysztof Wegrzyn was apparently asked to leave his position at the Joachim competition today. And his "protegee" shouldn't have gotten third prize after playing that sub-par Sibelius. This was not fair to those who places 4 and 5 and should have been above her. IMHO.

we haven’t seen (I haven’t at least) anything official about why Wegrzyn was asked to leave, so I would be a little cautious about concluding it was related to the selection of the finalists. But regardless of the reason, if you don’t wish to see KW as jury chairman at future Hannover Comp. events, it looks like your wish will come true.

As for the argument that “with a performance like that, 3rd place is unfair” this is an example of where seeing the judges’ marks would be interesting. I have not watched any of the playing in this competition, but I can imagine scenarios where a player of sufficiently compelling artistry held on, despite an allegedly poor performance in one of the works, to win one of the lesser prizes over players who did not make any big mistakes, but perhaps failed to inspire. You might still argue that the judges gave too much of a “gift” but we aren’t talking about an audience prize here, we are talking about one given by the jury.. Different jury members have different reactions to performances, just as you and I will almost certainly have differing opinions of any performance we both see, even though there is no puppet master telling us how to respond/vote. We may also have differing views about whether we think a competition should reward consistency, individuality, adherence to our personal views about how such and such a piece should be played, etc. Technical standards continue to improve over time, which makes a handful of wrong notes, a smeared passage, or a memory slip not so interesting as a means of judging a performer as their musicality. No one would ever listen to the recordings of Arthur Schnabel playing the Beethoven piano sonatas if we tossed them on the trash heap of history due to the frequent untidy playing in fast passages, when conservatories are now full of young kids who can rip through the notes with ease, but might as well be a MIDI sequencer. As Schnabel so aptly put it “the notes I handle no better than many others, but the pauses between the notes, ah, that is where the art resides.”

Again, I am not defending the specific placement of any of the competitors, as I have not heard the performances. Rather, I am arguing that reasonable people can have quite different reactions to a set of performances, and we should not be too quick to judge on technical perfection alone, if the goal is to find interesting musicians whose performances might continue to bring enjoyment.

Finally, another question is whether one sees each round of the competition as essentially independent, a filter for cutting down the list of contenders, but everyone starting the next round on an even footing, or if you see the voting for the final places as a summing up of the player’s efforts throughout. Again, if we could see all of the marks, and know how they are combined, it might be clearer to us if the 3rd place came because she had consistently outperformed the others throughout the competition, favors were being traded, or whatever.

October 30, 2018 at 05:34 PM · Greetings, here is the story about Krzysztof Wegrzyn, though it appears to be in German, and also possibly behind a firewall? And here is the Slipped Disc article.