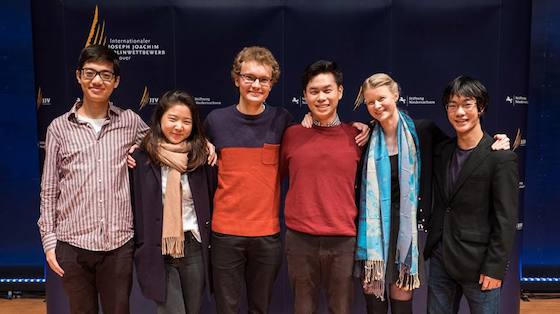 Below is the live feed for the competition (come back later to view, if it is not currently live):

Two final rounds will begin on Monday. In the first final round, violinists will perform as first violinist of a string quintet, alongside the members of the Kuss Quartet. In the second final round, finalists will play a major violin concerto with the NDR Radiophilharmonie, conducted by Andrew Manze.

The first prize winner and other placements will be announced on Oct. 26, including a live audience winner as well as a international livestream audience award winner.

The competition began on Oct. 11 with 32 participants from 15 countries. Semifinals begin today, with each violinist required to present an hour-long chamber music program, with repertoire selected by each participant, plus a required contemporary piece, "Hauch" by Rebecca Saunders. Participants also are to perform an encore of their choice, which they will first introduce to the audience. Finalists will be announced Oct. 21 with winners announced Oct. 26 and the competition ending with a Winners Gala Concert on Oct. 27.