October 10, 2018, 12:05 PM · More allegations have surfaced against Cleveland Orchestra concertmaster William Preucil, who is currently under investigation by the orchestra for sexual misconduct. On Sunday, the Cleveland Plain Dealer published allegations by two more violinists, Emilia Mettenbrink and Raffaela Kalmar, who both allege sexual misconduct by Preucil in the early 2000's. 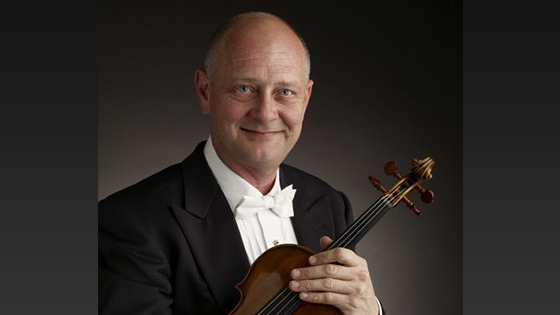 The Cleveland Orchestra's investigation was called in August, following the publication in late July of a Washington Post article that describes a 1998 incident involving violinist Zeneba Bowers, who was in her mid-20s and a member of the New World Symphony at the time of the alleged incident. The article focused on sexual harassment, misconduct and assault in the classical music world.

Days after the publication of that article, Preucil was suspended from the Cleveland Orchestra, then resigned from his position as Distinguished Professor of Violin at the Cleveland Institute a day later.

The latest allegations also involve incidents in the early 2000s. In the Plain Dealer article (click here to read it), Mettenbrink describes a 2005 incident in Miami, when she was 26 and playing in the New World Symphony and Preucil was giving master classes and private lessons. Kalmar describes a 2003 private lesson incident, when she was a 19-year-old freshman at the Cleveland Institute of Music.

Allegations of misconduct by Preucil also were outlined more than a decade ago in a 2007 piece called 'Sour Notes' in the Cleveland Scene, which alleges both sexual misconduct and nepotism by Preucil.

In Germany, the name of an accused person cannot be published without his/her first being adjudged legally guilty. That is something that should be the case here.

Otherwise peoples’ lives are ruined on, potentially, the basis of a disappointed evening.

October 11, 2018 at 03:09 AM · First, this is the US, so German rules of law do not apply. Second, this is not a legal matter, no suits have been filed, it is a case of an employer (Cleveland Orchestra) investigating allegations of misconduct on the part of an employee. Preucil resigned his position at CIM this summer.

Most important: "the basis of a disappointed evening." Can you possibly be serious? Multiple women have now reported sexual assaults by the same man and the Washington Post reported they knew of others who wanted to remain anonymous. He never denied the 2007 incident, in which the woman was paid off. He has not commented publicly on these latest reports.

So, how many women does it take to be convincing? Whose lives are "ruined"? Are you aware of the costs to women who report sexual assault?

October 11, 2018 at 09:51 AM · In Germany, my understanding is that a clear statement of "no" or "stop" is not in itself sufficient. A rape victim must physically fight back for being subjected to a sexual act against ones will for a non-consenual sex act to legally be considered "rape".

It's not clear to me that Germany has much to teach the rest of the world in this regard.

October 11, 2018 at 02:12 PM · That "Sour Notes" piece reads like a mixture of news reporting and an opinion piece. The bias of the reporter comes through in comments like "Arrogance and entitlement have a price."

This is not to dismiss any of the women coming forward or throw their testimonies into question. I'm not arguing for the innocence of the man. The evidence is plentiful enough. However, the journalistic standards of that original article are low. If they'd quoted someone else talking about his arrogance, that is fine. For the reporter to make these judgments, more than once, is not journalism. Given that the piece was written by a woman (and I'd like to be clear I'm not talking about Laurie Niles, but the other piece referenced), their objectivity on this particular topic could be called into question, and their reporting could be seen to fall into the category of a political vendetta, not because they wrote the piece, but because they couldn't keep their personal feelings out of the text.

On this issue of sexual harassment, which some folks will try to dismiss out of hand, it is better to let the evidence speak for itself, and not load personal feelings into the mix. It's a sure way for some to use such opinion pieces to reject the whole allegations, and then we've gotten nowhere.

Laurie's reporting has journalistic integrity, which is shown oh so much more clearly when you compare it to an inflammatory, vendetta ridden site like Slippedisc.com

October 11, 2018 at 03:51 PM · So David, are you implying that only male reporters can be "objective" when writing stories about sexual assault or harassment? Female reporters can't "keep their personal feelings out" of their work? I think that statement says a lot about you - I thought the article was well-sourced and in no way sounds like a vendetta. The journalist quotes many sources, both named and anonymous. The orchestra world is quite small at the top, so it should be easy to understand why many musicians and students are afraid to come out publicly against a prominent person.

October 11, 2018 at 09:30 PM · David, I agree that the "Sour Notes" piece had problems, and because of that it was all too easy for many people at the time to dismiss it as biased journalism. (The problems were not that it was written by a woman but that it took an undeniably opinionated tone). The issues kept re-surfacing, though. When it comes to this article, I felt it was important to let the community know about the latest allegations because they have been published in both the Plain Dealer and on NPR News. They are public knowledge, in other words. To be sure, people are not alleging crimes, they are alleging inappropriate behavior. But such behavior does have a bearing on whether or not an organization continues to employ a person in a position of responsibility and leadership. The Cleveland Orchestra is continuing its investigation, and whatever that organization decides, it does seem important and appropriate that it is giving the matter serious attention.

October 12, 2018 at 02:23 AM · "In Germany, the name of an accused person cannot be published without his/her first being adjudged legally guilty. That is something that should be the case here.

I can see some value in this. People (both men and women) have been known to make false accusations of one sort another. And even direct eye-witness testimony has sometimes turned out to be mistaken. There have been quite a few cases where people have been sentenced to long prison terms, or even death many years ago, who were later exonerated when DNA evidence became available, proving that it was someone else who had committed the crime.

October 12, 2018 at 05:37 AM · To 174.237.136.61 regarding "women can't be objective", THAT woman was not objective, it and was due, I'm really sure to her strong feelings on the subject. And I stated quite directly that Laurie does recount the topic in a professional manner. So the words you're trying to put in my mouth don't fit. And I suspect you have strong feelings on the subject, so you cannot see the non-objectivity of some comments in the original article. And you launch a personal attack on me for saying anything about the bias in the article. Thank you for making my point for me.

I stand by my comments, regardless of what you think it says about me. I read lots of poor journalism by both genders, and both political stances, and I pick at those too.

I just think that polemics by less than professional reporters can cause people to tune out from the topic, and it weakens the truths of the matter.