October 9, 2018, 2:51 PM · Violinist Leila Josefowicz has won the $100,000 Avery Fisher prize for 2018 , awarded by New York's Lincoln Center to solo instrumentalists who have demonstrated outstanding achievement and excellence in music. 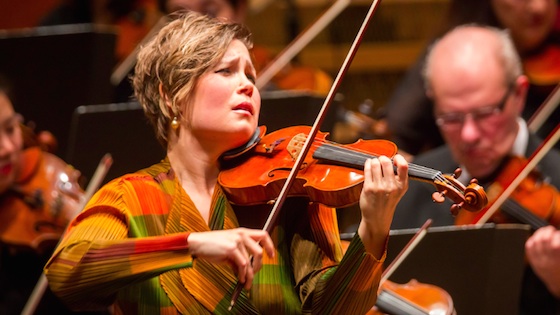 The announcement was made last Thursday at her performance of Stravinsky’s Violin Concerto in D with the New York Philharmonic at David Geffen Hall. Previous recipients include Joshua Bell, Gil Shaham, Midori and Sarah Chang, among others.

"My goal will continue to be to enlarge and enrich the repertoire of the violin by commissioning and performing works of the 20th and 21st centuries," Josefowicz said. "My intention is to help create new masterworks for future violinists to study and perform for audiences. It is so necessary that the great works of today be heard."

Josefowicz, 40, is a recipient of a 1994 Avery Fisher Career Grant and a 2008 MacArthur ‘genius’ grant. Known for her advocacy and fine performances of modern works, she has premiered violin concertos by many composers including John Adams, Esa-Pekka Salonen, Colin Matthews and Steven Mackey. She was nominated for Grammy awards for her 2016 recording of John Adams' Scheherazade.2 with the St Louis Symphony, conducted by David Robertson; as well as her 2014 recording of Esa-Pekka Salonen’s Violin Concerto with the Finnish Radio Symphony Orchestra, conducted by the composer.

Since she was a young virtuoso, she has been a pioneer of contemporary music. Her energy and passion have not deviated, and her performances remain unique in our symphony halls.

Lila Josefowicz has had a determined passion for contemporary music since her arrival as young virtuoso . She deserves our Congratulations for this well-deserved honor.