October 5, 2018, 5:53 PM · Congratulations to Los Angeles-based violinist Vijay Gupta, who on Thursday was named one of 25 recipients of a 2018 MacArthur Foundation "genius" grant.

Gupta, who joined the Los Angeles Philharmonic in 2007 at age 19, has long been an advocate for the homeless, incarcerated and underprivileged residents of Los Angeles, particularly those who live downtown on "skid row." 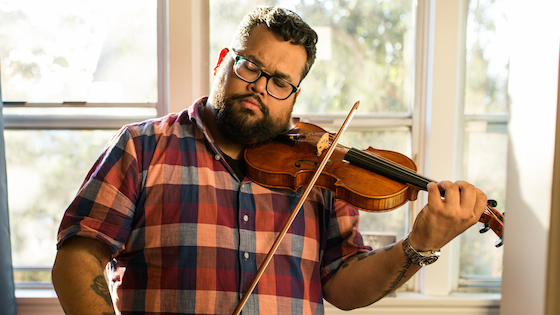 His advocacy began shortly after became a member of the LA Phil, when he gave lessons to Nathaniel Ayers, the Juilliard-trained violinist whose spiral into mental illness and homelessness became the subject of a series of Los Angeles Times columns by Steve Lopez, which inspired a book, and then a movie called "The Soloist."

In 2011, Gupta co-founded the not-for-profit Street Symphony, which pools the talents of local musicians to provide live concerts at shelters, county jails, and treatment and transitional housing facilities. Every year the Street Symphony performs Handel’s "Messiah" on Skid Row in conjunction with a series of free community workshops that encourage residents to perform or create their own pieces.

Gupta was officially recognized by the MacArthur Foundation for "providing musical enrichment and valuable human connection to the homeless, incarcerated, and other under-resourced communities in Los Angeles."

Vijay Gupta received a B.S. (2005) from Marist College and an M.M. (2007) from Yale University. In addition to being a member of the LA Phil and artistic director of Street Symphony, Gupta is a faculty member at the Longy School of Music of the Bard College Masters of Arts in Teaching Program and the Colburn School.

Awarded to "to encourage people of outstanding talent to pursue their own creative, intellectual, and professional inclinations," the MacArthur Foundation grants each of its fellows a stipend of $625,000, paid out in equal quarterly installments over five years.

That would really be something.